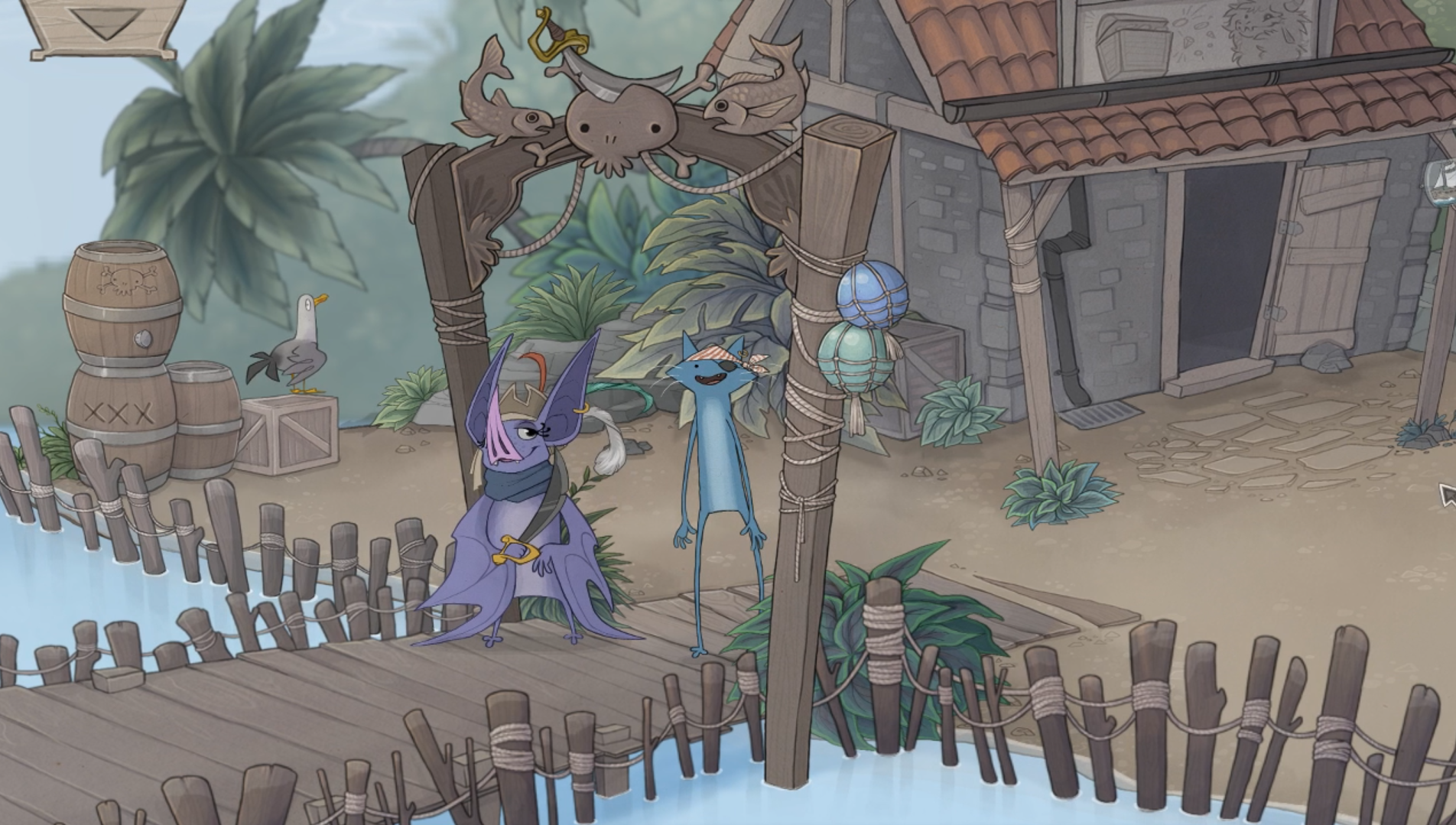 One of the best things to do as a child is playing pretend with friends and making games out of your ideas. This core concept is the basis of roleplaying games to this day. Why not join another group of friends on their own roleplaying adventure to see what they’ve created? Chook & Sosig: Walk the Plank lets players experience a pirate themed game created by a group of animal friends. With charming and quirky characters, cute visuals, and goofy interactions, this game provides a wonderful experience for all ages.

The story follows Chook the ghost chicken, Sosig the cat, Cow the undead cow, Exley the undead sheep, Hebble the fox, and Min the bat after they gather together to play a roleplaying game that Exley crafted. They are all sitting around a table, playing in a Dungeons & Dragons format (in terms of having a Game Master and an adventure they crafted). You play as Sosig as he begins the pirate themed adventure laid before the group. Exley doesn’t appear in the adventure, Chook shows up to give hints if you need them, and the other three show up in various other roles such as merchants, bartenders, and more. 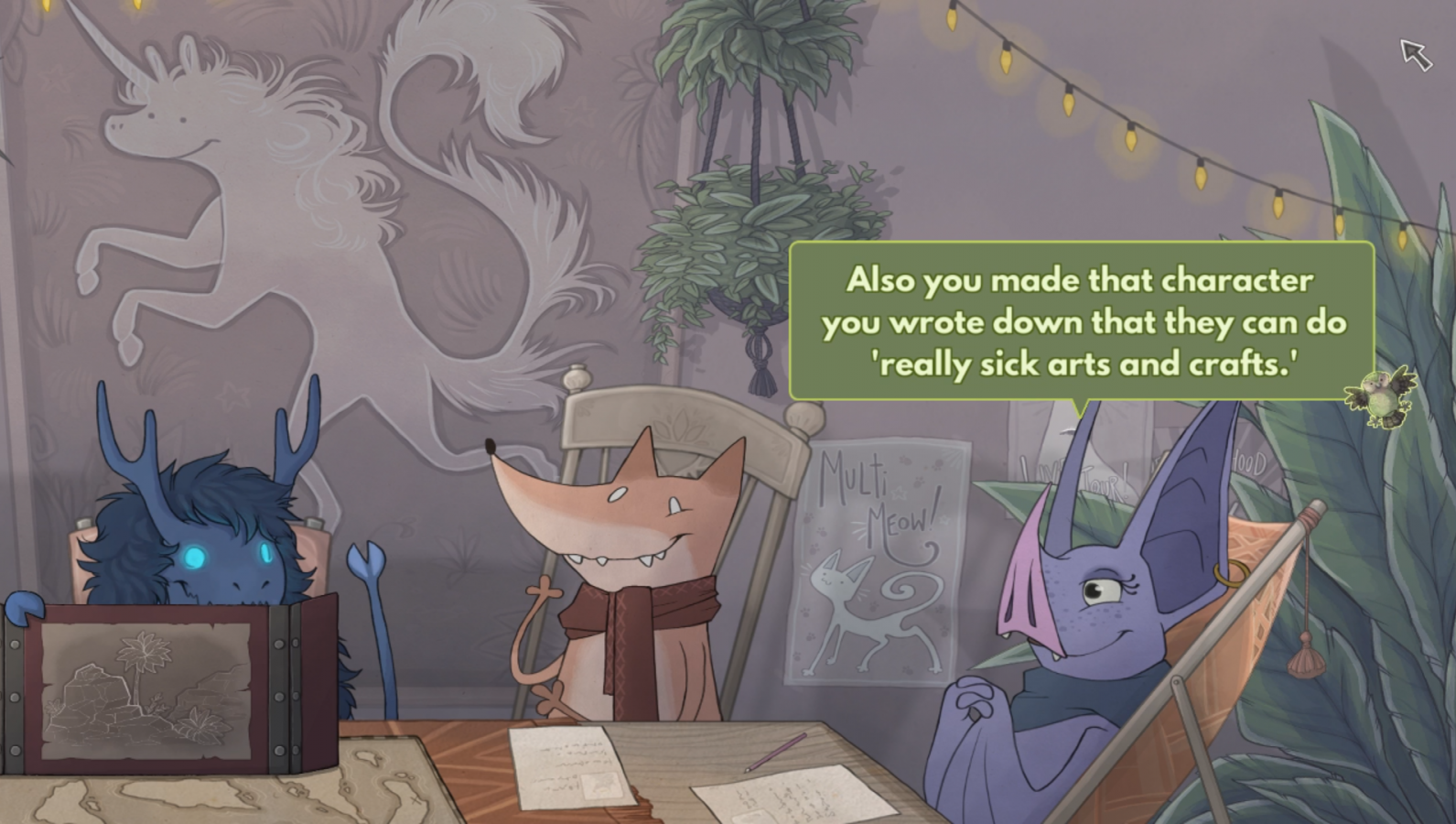 Even though the characters are repeated, it’s actually nice seeing them take on different roles. It truly represents the fact that it’s just a group of friends having a good time. They even break character and talk about things like the inspiration for their characters, their thoughts on events in the game, and so on. When they do this, the game tends to switch back to the group sitting around the table talking. It may take some people out of the pirate adventure’s immersiveness, but I think these segments add some endearing moments to the characters. Besides the table talks, the unique personalities of each character made me like them more. For example, Hebble’s tendency to trick others into letting him be lazy and get his way while denying it with a smile always made me laugh. I think that Hebble honestly became my favorite member of the group, so I looked forward to visiting him whenever I needed to do so.

The gameplay is the basic point-and-click format: use the cursor to aim, and click to perform actions. You’ll usually be walking around, interacting with objects around you, and talking to your friends. Even with the extremely simplistic gameplay, you’ll still need to keep your eyes peeled. You’ll encounter puzzles that can only be solved by finding the right items and performing the correct action with them. Other times you won’t need anything specific, but you need to think creatively in order to get an item you need. The puzzles aren’t that difficult, but there were some instances where it took me longer to figure something out than I wish it had. I had a few “how did I not do that?” moments. It wasn’t the game’s fault, rather I was disappointed in myself. 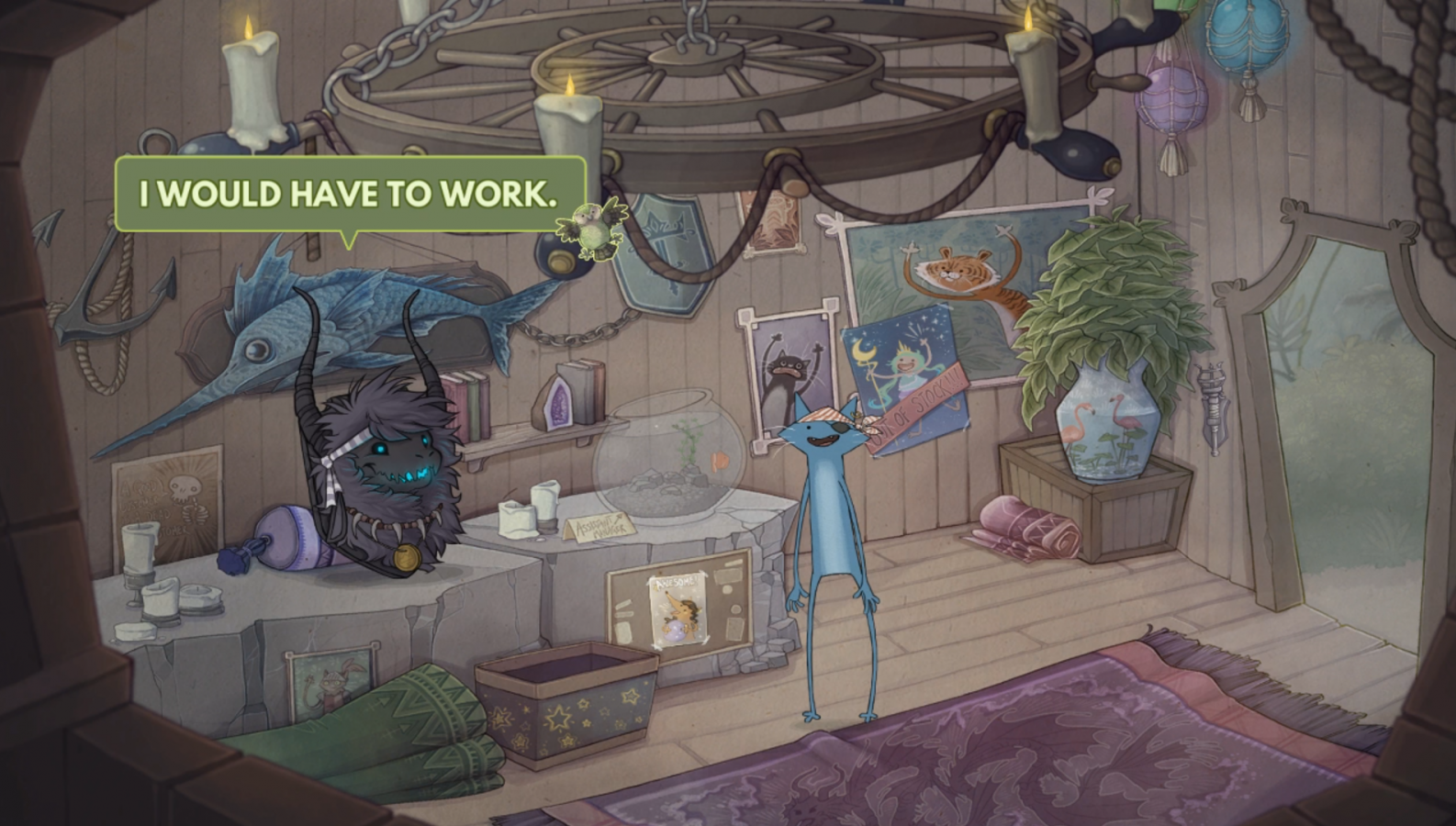 The art style of the game is wonderful. The fact that everything was done by one person is impressive and it’s clear that she cares about her work. Each character feels unique and you can get a sense of their personality just by looking at them. Not only that, but everyone has an appealing cuteness to them that I just loved. The various islands that you explore all look different from one another and are well designed. Whether it be The Beast Below Tavern, Goblin Isle, or even The Sea Shrine for example, you get the sense that you’ve entered an interesting little place. The music fits the light-hearted tone and the occasional noises made when characters talk is adorable. There’s no voice acting by any means, but this game doesn’t need it.

Chook & Sosig: Walk the Plank is such a charming little point-and-click game that sadly only lasts a few hours at most. It’s mostly a bummer because by the end of the game, you’ll likely wish you had more time with the crew. At the same time, it’s understandable given that the game revolves around a roleplaying session. You don’t need any big flashy events or action; all you really need is a few hours having a relaxing, fun time with friends. The fact that the game only costs $9.99 is a plus too, so I’d say it’s worth it for fans of casual point-and-click games or even just fans of the other Chook & Sosig games. All in all, the time I spent with Sosig and friends was time well spent. If they get together for more goofy antics, then count me in!