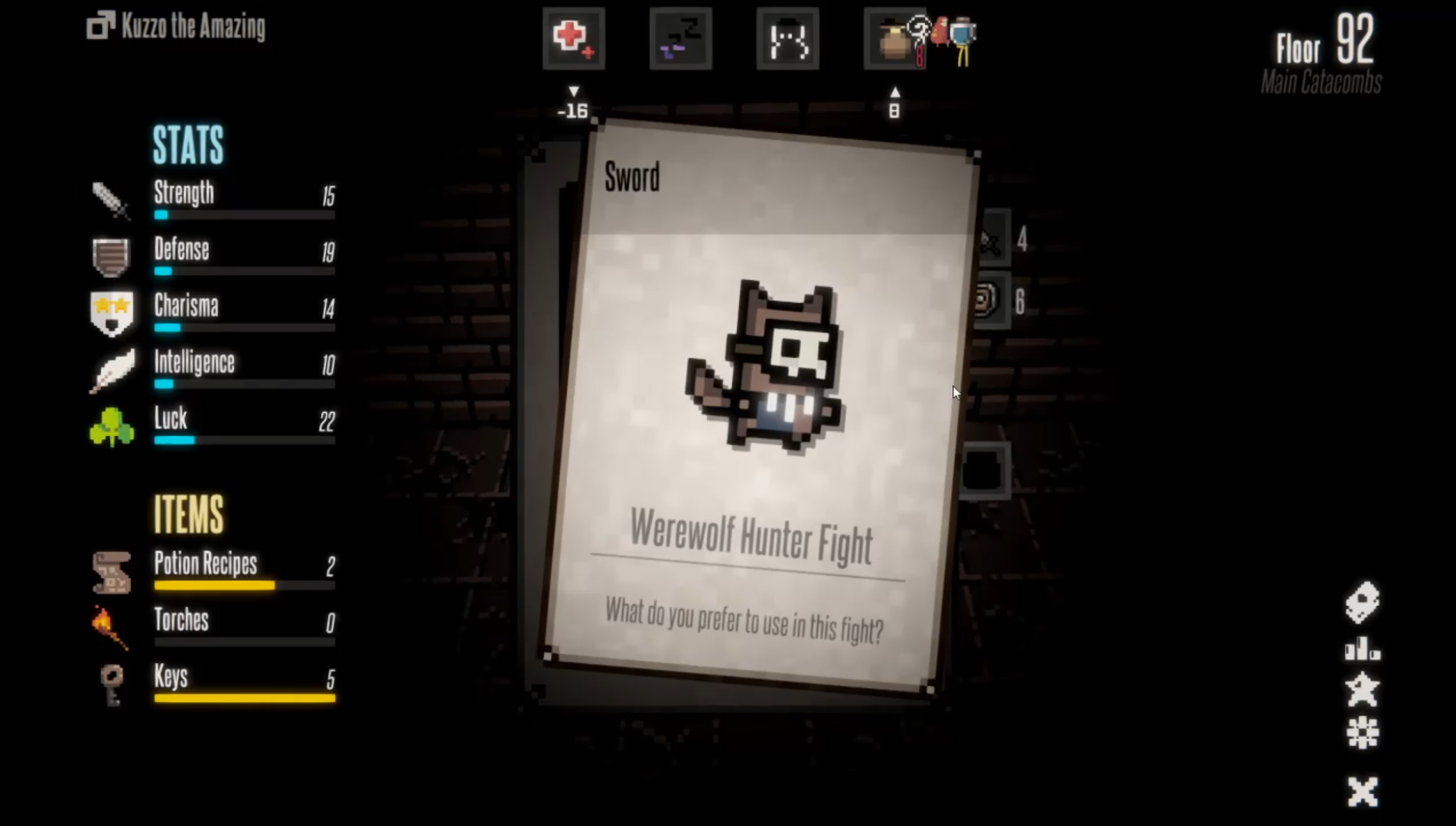 There’s nothing like going into a dungeon with little to no tools and using what you find to fight your way through. Whether it’s guns, swords, shields, or explosives, these tools are the difference between life and death. In a typical dungeon crawler, you’d be running around from room to room, dodging attacks and firing or swinging back at your foes, but that’s not the case here. Little Dungeon Stories takes the usual roguelike aspects of procedurally generated areas and weapon-based combat, and replaces them with random events every floor and card-based combat. If you’ve used any apps that only require swiping left or right, then you’ve got what you need to play Little Dungeon Stories. 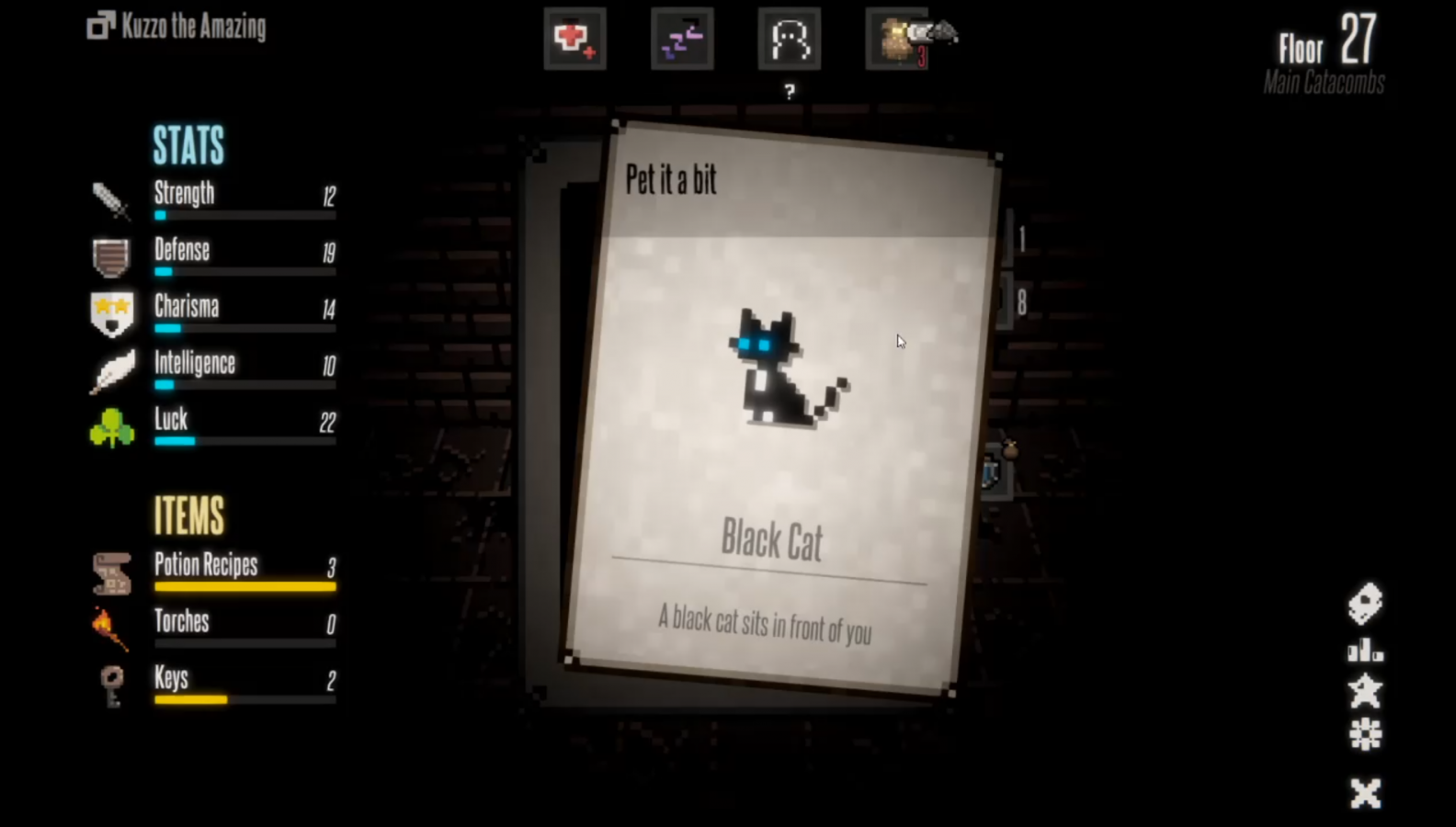 Little Dungeon Stories follows an adventurer as they enter the depths of a mysterious dungeon. Besides that, there isn’t any story to the game. It’s a bit of a bummer, but the relaxing gameplay is enough to keep you playing.

Gameplay boils down to swiping left or right. There are some situations where you have the option to swipe up or down when choosing your starting trait, visiting shops or defeating bosses, but it’s primarily left or right. When starting your run, you get four different traits to choose from. There are more than four in the game, but they won’t be the same four available at the start of each run. Each trait gives you a bonus to start with, such as increased strength, higher charisma, wearing the greed ring to award more gold, etc. Depending on how you want to try and play out the current run, you should choose carefully. That little edge may be what helps you succeed. 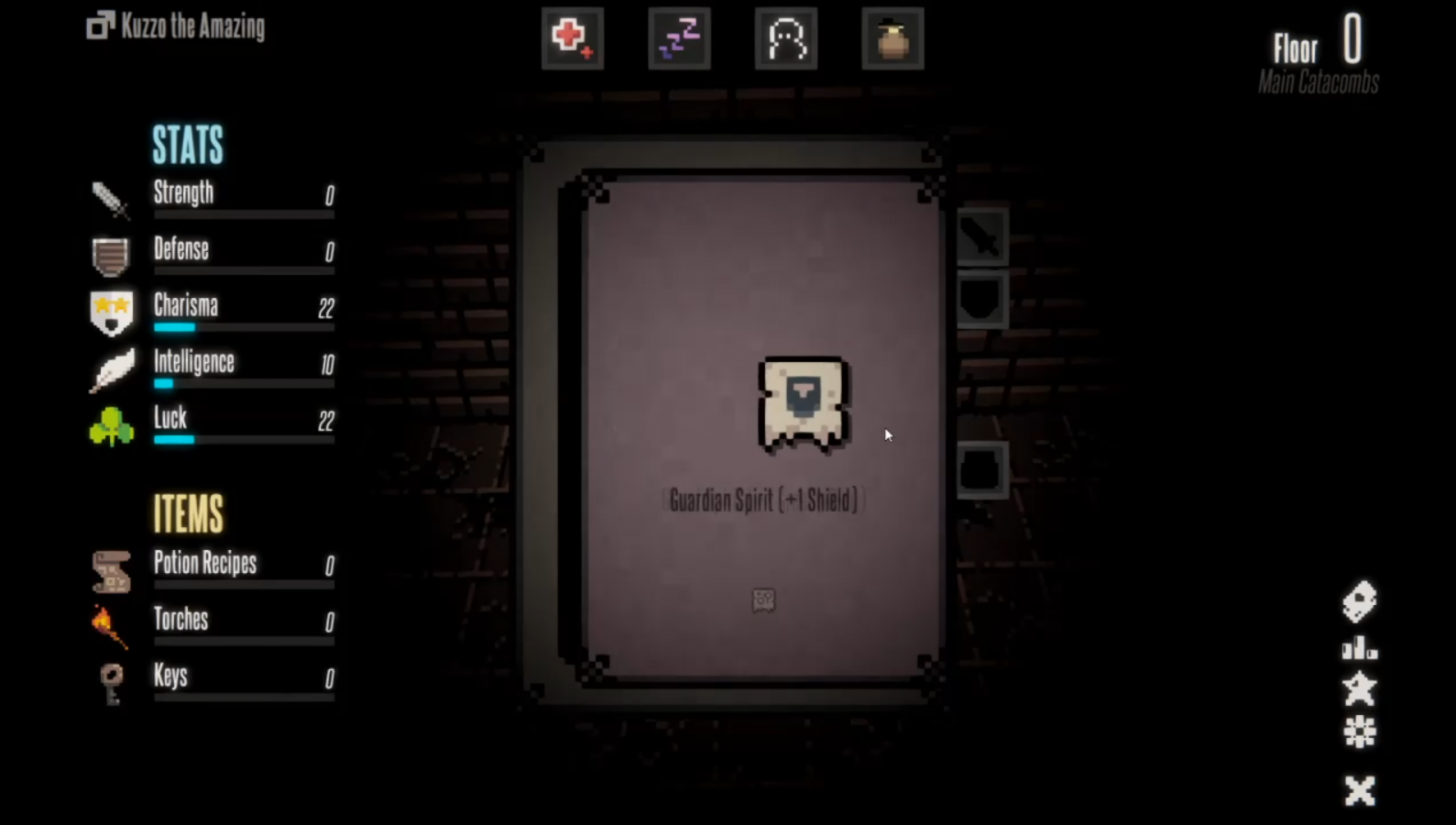 Traversing the dungeon involves a random event card popping up in the middle of the screen. Swiping left performs one action while swiping right performs a different action. It’s your choice what you want to do, so think carefully. Thankfully, swiping most of the way in a direction lets you see what results that choice will have on your main four stats. Once you know what you want to do, complete a swipe. Sometimes there’s a follow-up card that continues the event, but most of the time the next card is your event for the next floor. Examples of choices are whether to fight a creature or run away, deciding if you want to walk through a doorway or continue down the hall, and making a deal with a shady individual or refusing their offer. There are some interesting situations, although they can get repetitive after awhile.

The top of the screen shows four stats that you need to keep a close eye on: health, energy, humanity, and gold. They all start at 100 points, but if any of those first three hit zero, then it’s game over. You’ll either die, collapse in the dungeon, or be corrupted by its darkness; regardless of the result, the run is over. If you fight an enemy without a sword or get affected by unfortunate events, you’ll lose health. If you fight an enemy without a shield or perform certain actions, you’ll lose energy. Every time you swipe a card (or as a result of certain events) you’ll lose humanity. Gold is usually spent at shops or during certain events. 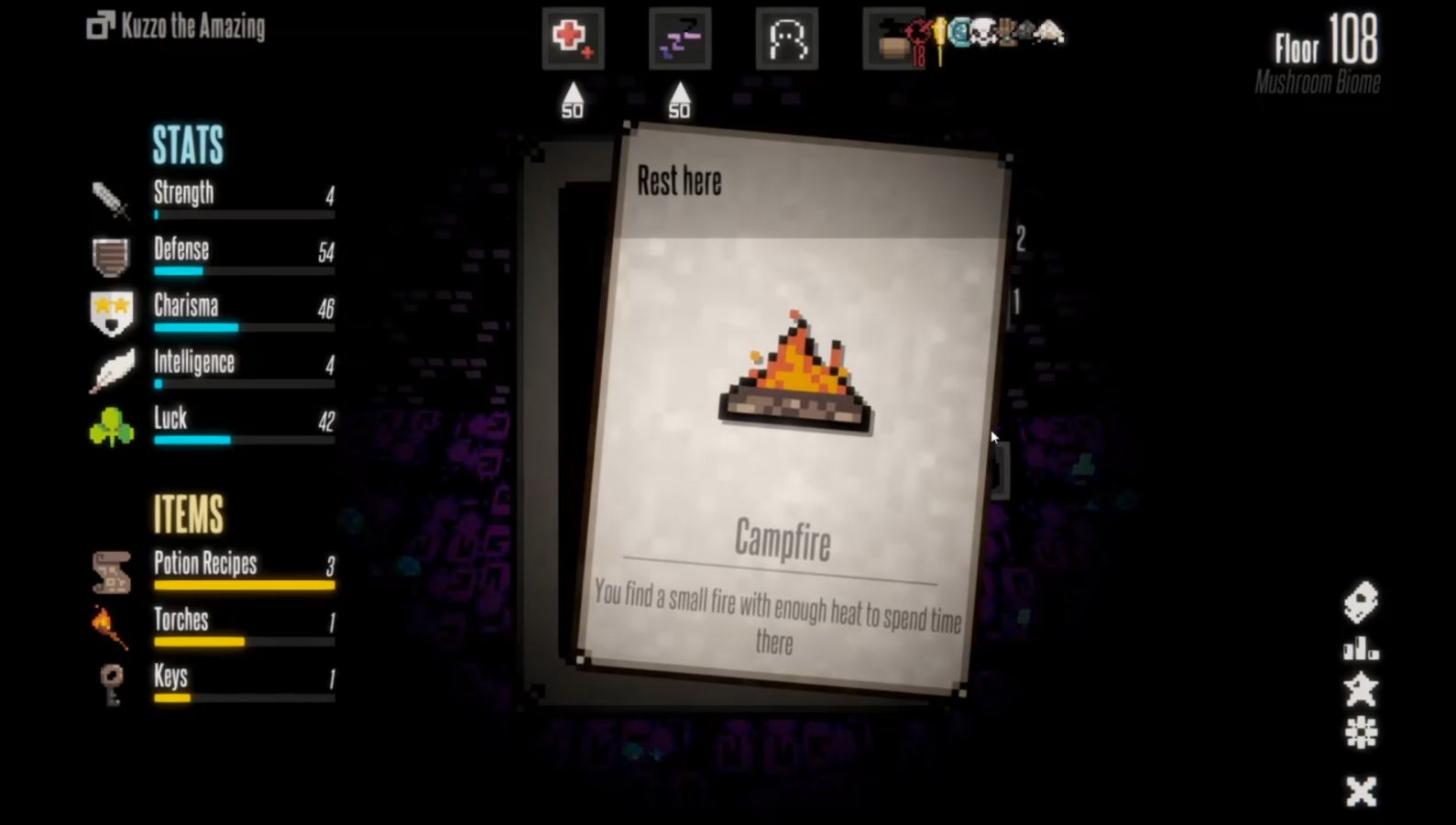 Thankfully, there are items and events that can help you replenish any or all of those stats. You can obtain potions to drink, be rewarded with health, energy, humanity, or gold from defeating special creatures, and encounter interesting creatures that will help replenish stats for a cost. If you defeat one of the powerful bosses, then you can choose to fully replenish one of your four main stats at no cost. This is incredibly helpful, especially if you’ve been taking some beatings.

On the left side of the screen you have your various other stats such as strength, defense, charisma, and so on, along with any potion recipes, torches, and keys you may have collected. The aforementioned stats help determine if you can perform certain actions such as reading tomes you find, lowering shop prices, defeating enemies quicker, etc. Potion recipes can be turned in to alchemists in exchange for potions, used at alchemy stations to create them yourself, or exchanged for items at some shops. Torches can be used to create campfires or see through the darkness in certain situations. Keys can be used to open treasure chests in order to obtain better tools such as stronger swords and shields. This can be nice when you either don’t have a sword or shield, or the ones you currently have don’t have many uses left. 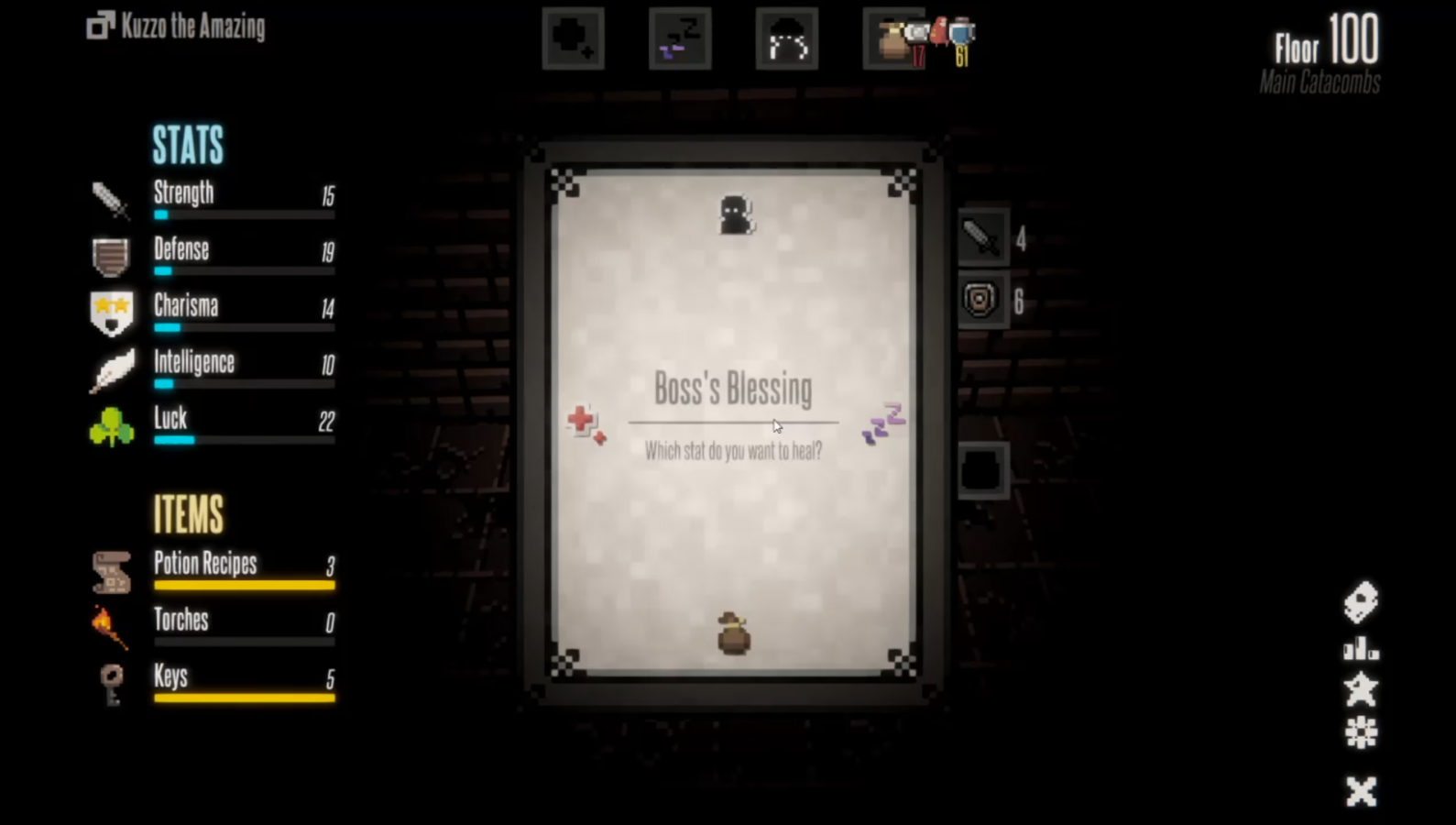 The sound design is minimal yet effective; there is a constant musical score playing in the background with occasional sound effects that play during events. Graphically, the game looks good, but it’s nothing groundbreaking. Considering it’s a roguelike card-based game that uses swiping as the main gameplay mechanic, you don’t need any incredibly detailed or breathtaking designs to enjoy yourself. The gameplay gets repetitive as a result of very few actions being required of you, but it’s good for short bursts where you play for about an hour or so. The card-based choice mechanics offer an interesting twist to the typical roguelike formula, although it may not be as exciting to roguelike dungeon crawling fans. In the end, Little Dungeon Stories is a charming little roguelike that offers simplistic and relaxing gameplay, even if it doesn’t compare to combat-based examples such as Enter the Gungeon and The Binding of Isaac.