Shoot for the stars, if they even show up --- Star Horizon review 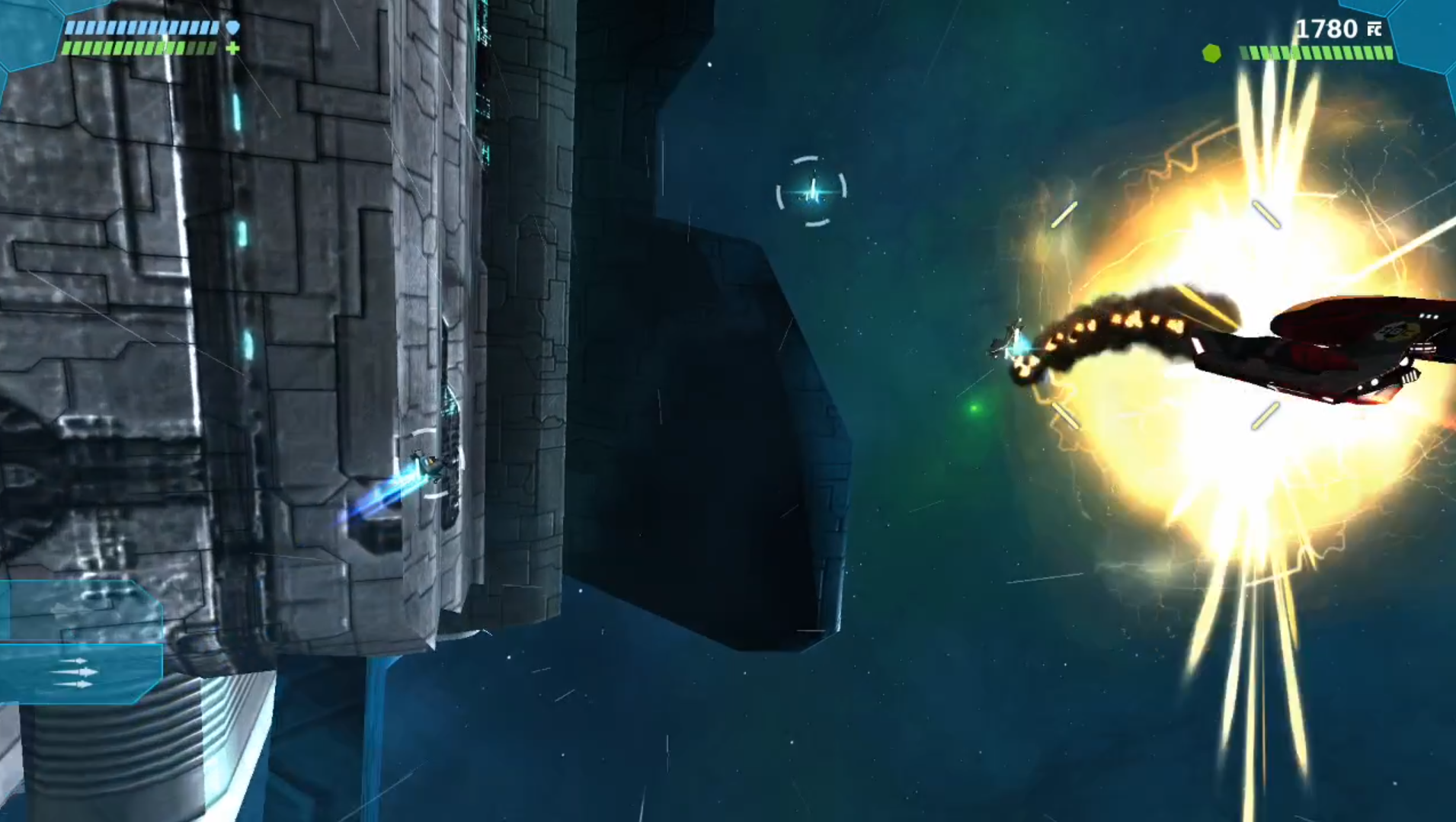 Ports of video games aren’t uncommon nowadays, whether they be between two consoles or devices from the same generation, or a way to bring games from an older generation to a newer one. The Nintendo Switch has been a stage for both examples, boasting games from mobile devices, the PS4, and Xbox One. Star Horizon is just one of the latest entries brought forth from the mobile selection, but how does it fare? As with a fair amount of mobile ports, it’s alright, but nothing amazing. Why don’t we hop into our spaceship and take a look at what Star Horizon has to offer?

Star Horizon is an on-rails space shooter where you’ll be firing at and blowing up spaceships, weaponry, and other devices throughout 10 missions. You play as John, a Federation pilot, who is tasked with suppressing Rebel forces. His AI, Ellie, controls various aspects of the ship and gives John updates on the status of their missions and the ship’s condition. Don’t worry, the AI controlling aspects of the ship is purely for the story; you’ll still be the one piloting the ship, dodging attacks, and firing weapons. Without spoiling too much, after a mission goes awry, John gets put into cryosleep and wakes up a few years later. Confused about why he was asleep so long, where he is, and what happened during the war he was fighting for, John looks wherever he can for answers. During his search, you’ll encounter both Federation and Rebel forces, and even be given a few chances to choose who you want to side with for a mission. Do you stay loyal to the Federation, or do you have a change of heart and back the Rebels? Choose carefully because your choices affect how the story plays out. 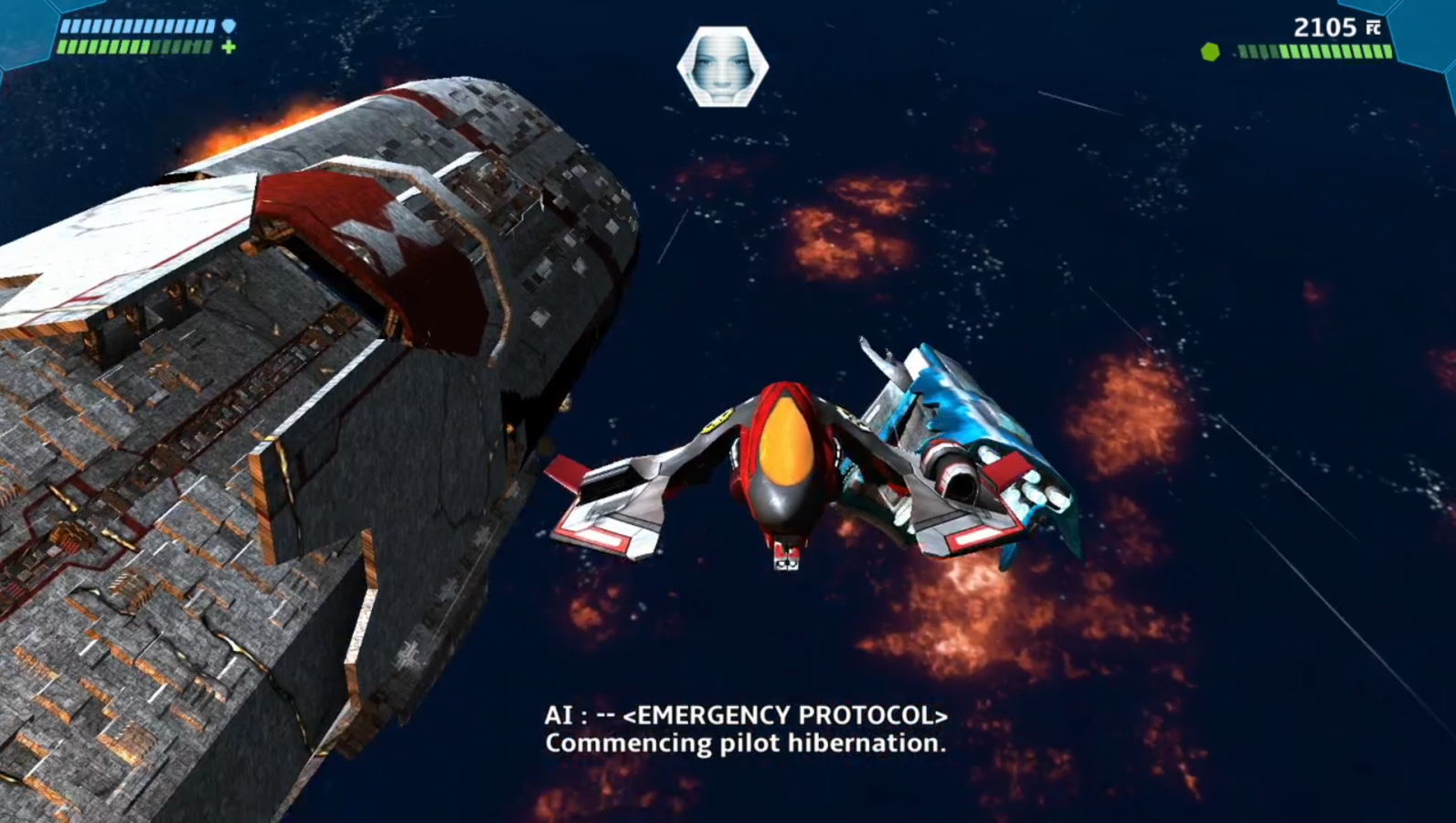 In terms of gameplay, Star Horizon follows the simple format of games like Star Fox. Your ship has a preset path that it follows, but you are given a small area to move up, down, left, and right in. You’ll also be able to dodge in any of those directions with the press of a button, along with firing three different weapons, all mapped to their own buttons. Your weapons consist of a laser gun, missiles, and torpedoes. The gun can be fired non-stop, while the missiles and torpedoes each have a cooldown between uses. The cooldowns aren’t very long, so that’s a plus. The missiles can be locked onto multiple targets and, when fired, home in on targets, while the torpedo only fires one powerful shell at a time. In other words, missiles are better for crowd control, while torpedoes are better for singular damage. I personally preferred the missiles since I’d typically face multiple enemies at once, but the torpedoes came in handy when a tougher enemy would appear.

As you play through the missions and destroy enemies, you’ll earn credits. These credits can be spent at your hangar in-between missions to buy upgrades. You can upgrade four things: your gun, missiles, torpedoes, and ship frame. Each upgradable aspect has three upgrades to them as well, but you must upgrade them in order. For example, the gun adds a second gun on its first upgrade, jumps up to a total of four guns on its second, and becomes a powerful cannon that fires fast plasma balls on its third. The damage the guns do also increases with each upgrade. The missile upgrades increase the number of enemies that can be locked onto, reduces its cooldown, and also increases the damage that they do. Torpedo upgrades increase the damage done and reduce the cooldown as well. Upgrades to the ship’s frame raise the ship’s maximum armor and health. As you might expect, the cost of the upgrades rises as you work through the more powerful ones. In other words, you’ll want to save up your credits or grind previous levels to build up a good supply. I tended to focus on gun and missiles because those were the most useful options for me. 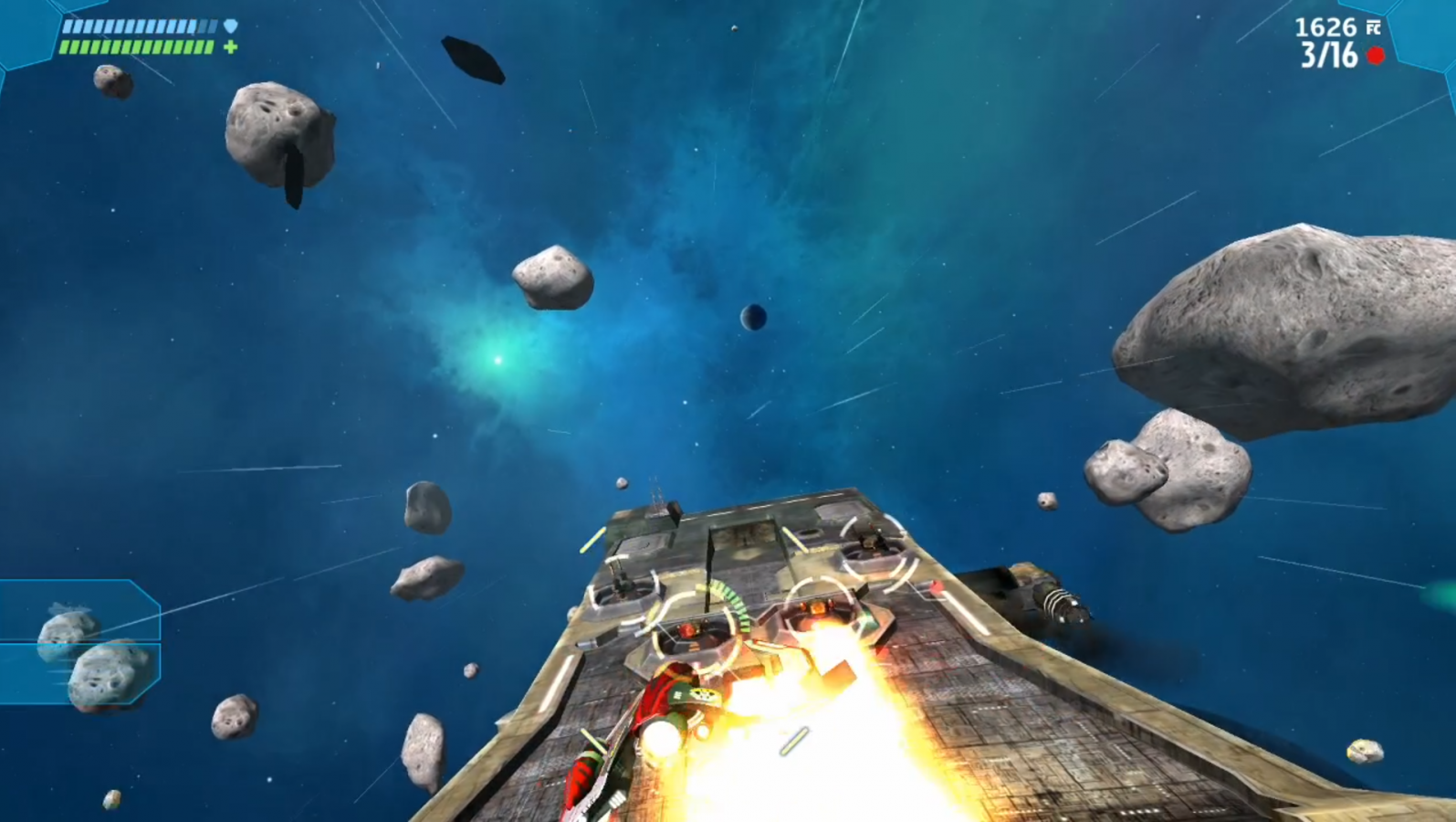 You can change the difficulty of the game, but I opted to stick with normal mode during my time with it. Overall, the game isn’t that tough, but you do need to be careful about taking too much damage. If you get cocky and don’t dodge enough, then you’ll quickly get gunned down. There are some tougher enemies that’ll teach you that lesson with no mercy if you don’t keep moving. Some later areas, like mission six in my case, may prove to be a bit too much to handle on the first attempt, so you may need to go back and grind previous levels for credits to upgrade your ship with. After upgrading my missiles and gun again, I retried mission six and it went much better for me. Thankfully the levels don’t take long, so grinding isn’t that big of a deal; it’s not great, but it isn’t awful.

Slightly related to difficulty, there is a huge issue that I encountered that kept me from completing the game. No, it wasn’t an overwhelmingly tough enemy or onslaught of gunfire; in fact, it was an oversight when porting the game and programming missions. On mission seven, you’re tasked with destroying at least six specified devices floating around the area. Since this is an on-rails shooter, you pretty much wait until you encounter the sections that have your targets and you let loose in order to destroy them. Turns out only like nine or so of these devices actually show, with three of them appearing before the objective asking you to destroy them even prompts. This means that destroying those three does absolutely nothing for you. The other six show up in two groups of three, with each group only staying on screen for around three seconds or so. That is nowhere near enough time to destroy them. It’s ridiculous. I didn’t even get time to lock onto one of the groups with my missiles before it was gone. I replayed the mission a few times to see if I missed anything, but it was the same every time. 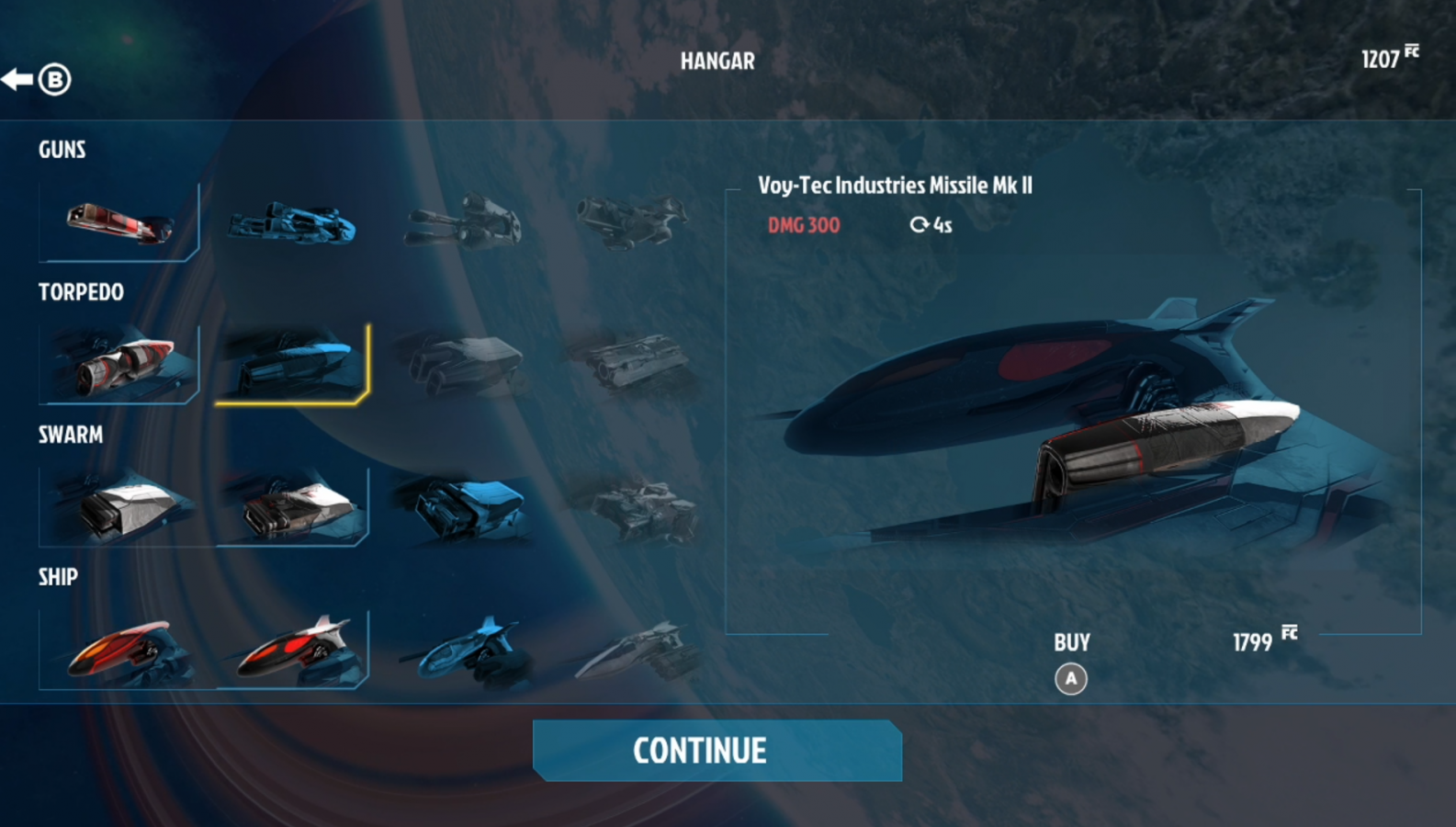 After playing through multiple times, I can clearly see where objectives were missing. It’s clear that there should’ve been more devices scattered throughout the mission for you to shoot at, but they weren’t put in. It’s a shame because I was looking forward to finishing the story. Star Horizon was an alright game up until that point. It’s a bummer of an oversight, especially since this game was a port. Before writing this, we did send word to the developers in the hopes that they can find a way to patch it and make the game beatable. If that doesn’t happen, I can’t honestly recommend this game. If it gets fixed, it may be worth a few hours of your time.

Aesthetically, the game looks good. Graphics aren’t incredible, which makes sense since it’s a port of a mobile game, but they get the job done. The sound design is a bit of a mixed bag, with the soundtrack and sound effects capturing the tone of a space shooter pretty well, but the voice acting doesn’t quite reach the same level. Characters sound more monotone than human to me, which is perfectly fine in the case of the AI, Ellie, but not for everyone else. Some people in mortal danger sound like it’s more of an annoyance to them rather than them fearing for their lives. I’m chalking this up to Star Horizon originally being a mobile game, but don’t expect anything that immersive in terms of dialogue.

In the end, Star Horizon is an alright game at best, but that’s only if they fix the issue that prevents you from completing mission seven. If it isn’t fixed, that drags it down even farther. Maybe once the bugs and glitches are patched and taken care of, then Star Horizon may be worth the $8 to $10 (depending on if it’s still on sale by that point). Until then, I’d steer clear, but if you’re really interested in the game, then keep an eye out for any potential fixes that’ll let you fully experience the game as it was intended.