See all that your deeds have done --- Hero must die. again review 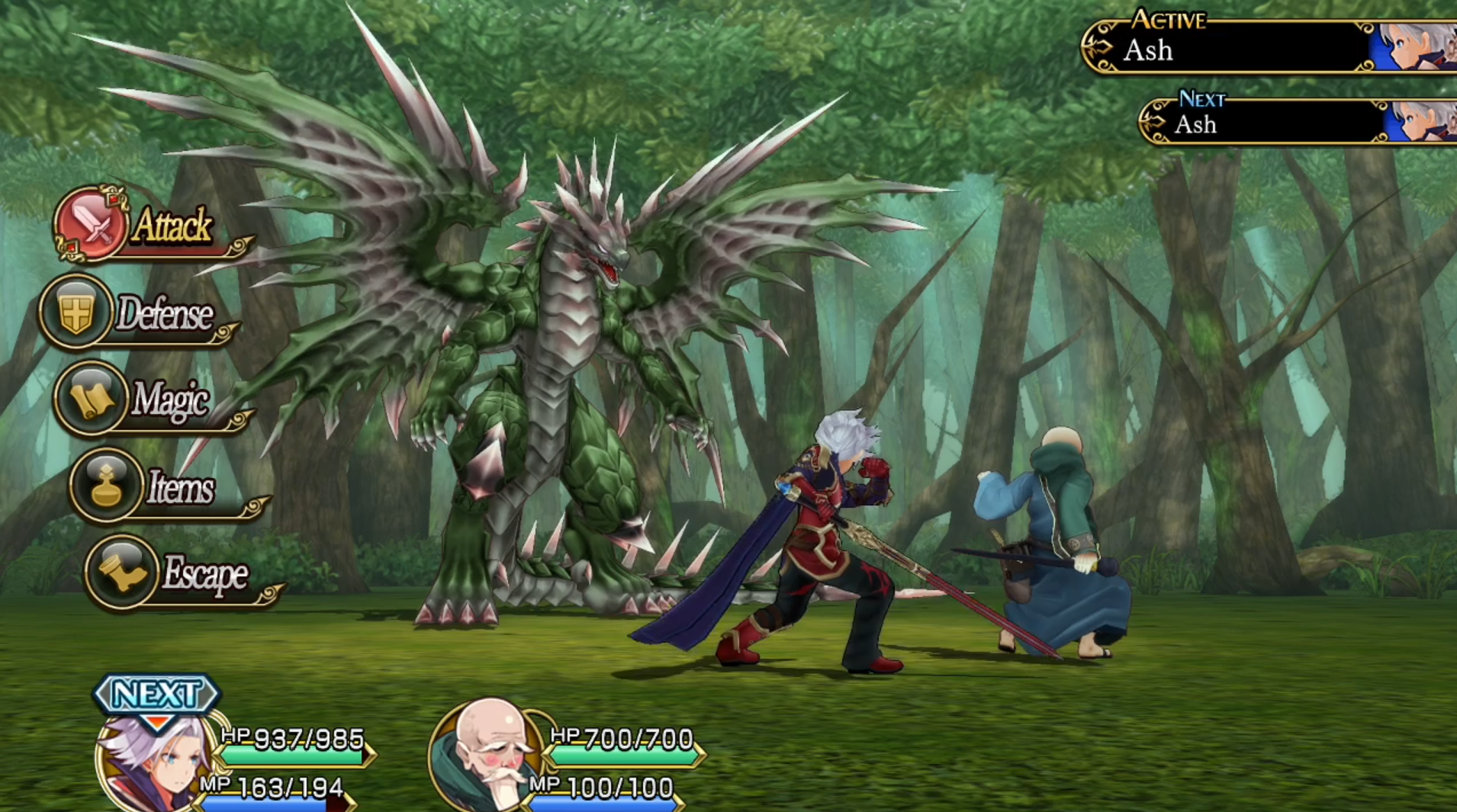 The standard formula for RPGs is that you are the hero on some sort of journey to save the world. It may be on a grander or smaller scale, but the point remains that you and a party of swordsmen, mages, archers, warriors, or whatever they may be, will travel across the land defeating enemies as you level up and get stronger in preparation for the final climactic battle. Now, what if I told you that there’s a game that begins after all of the aforementioned events have already happened? The Demon Lord has been defeated, but you have unfortunately fallen in your quest to slay him. There’s good news though, for God has deemed your acts worthy enough for resurrection; the catch is that you only get five more days. What will you do with your extra five days? That’s for you to decide.

Hero must die. again picks up right after the final battle has ended, with the titular hero talking to a mysterious angel. The angel helps you remember what your last moments were like and jogs your memory of being a hero. She explains that God admires your courage and sacrifice, so they have granted you exactly five days to live your life some more. It is Monday at 6am, so when Saturday at 6am hits, you pass on for good. You are also warned that you will get weaker as time passes, so you have to prepare for that. 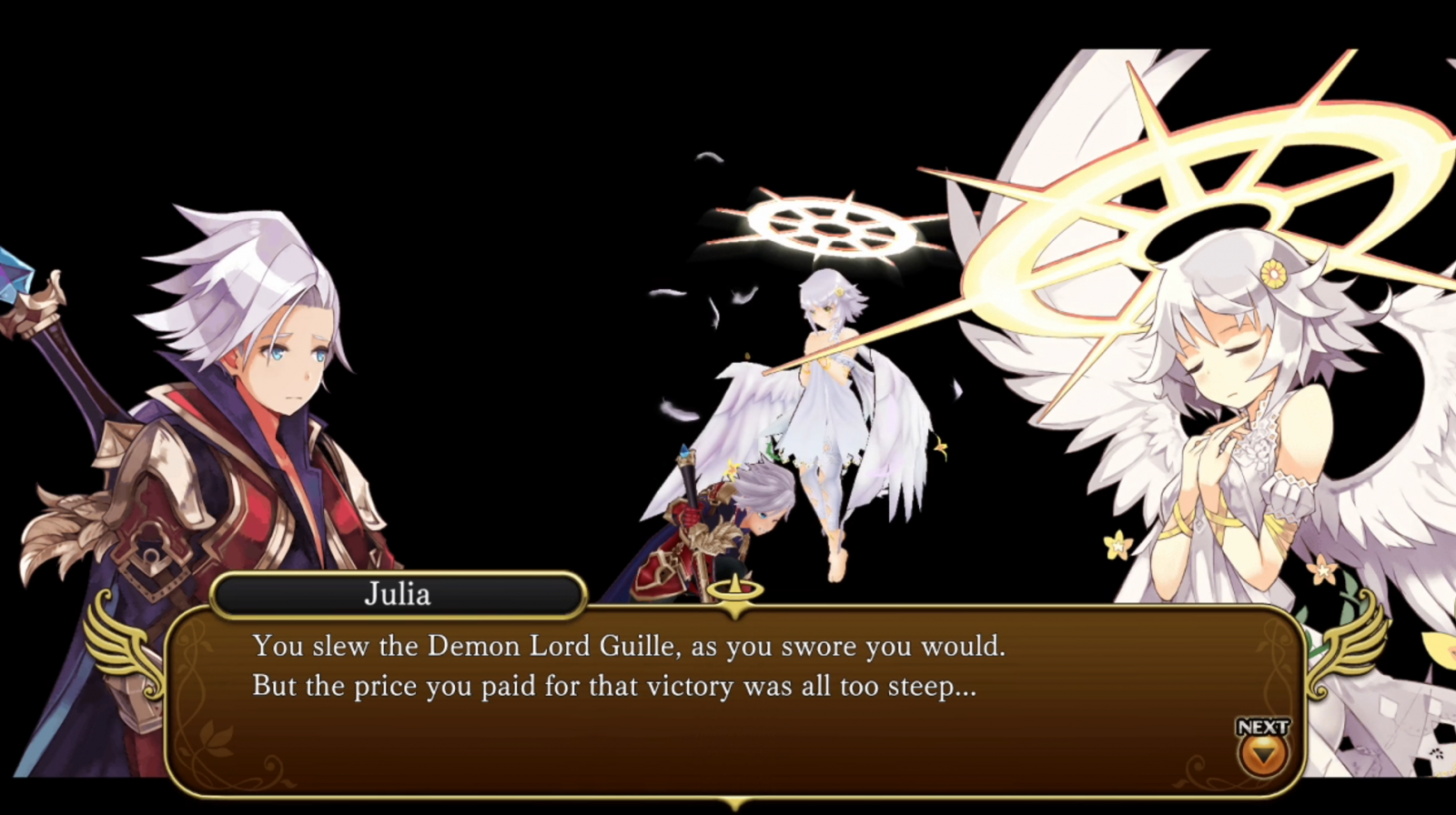 Unlike the usual RPG, there’s no main quest to follow during your time left. There is mention of your true love that you died to save and your goal of remembering who she is, but I couldn’t figure that out during my playthroughs. Other players will likely have more luck discovering that than I have had, so keep that in mind. You are given the chance to explore the world and do as you see fit. You’ll run into monsters to fight, citizens to talk to, shops to visit, and even special characters that have requests you can take on. Traveling the world, whether it be walking through towns and dungeons, or even making the journey to new locations, eats up time. Time constantly passes in intervals when in towns and dungeons, but traversing to a new area takes a larger chunk of time. The game lets you know how much time it takes, which can be lessened if you’re lucky enough to be in an area that has a cart ride available or you use a teleport spell. You may think that using the teleport spell the whole time is the clear answer, but there’s a limit to it. You can only teleport to the main three cities, and after a certain point in the game is reached, you lose access to it (more on that later). This leaves you with walking, so you’ll have to manage your time left much more than you previously had to.

You start off with your most trusted companion by your side, Thomas the monk. He offers to give you background on every location that you visit throughout the world, which is nice since you haven’t actually explored this world before. Besides knowledge, Thomas will fight by your side whenever you encounter enemies. If you want more party members, then you’ll need to complete some of the special requests available in various locations. For example, I helped a elf-like archer named Liu retrieve her lost wind orb from the Demon Lord’s castle and that led to her fighting by my side until I died. The party members have some pretty good skills and can hold their own fairly well, so having a full party of four is definitely helpful, especially later in the game. 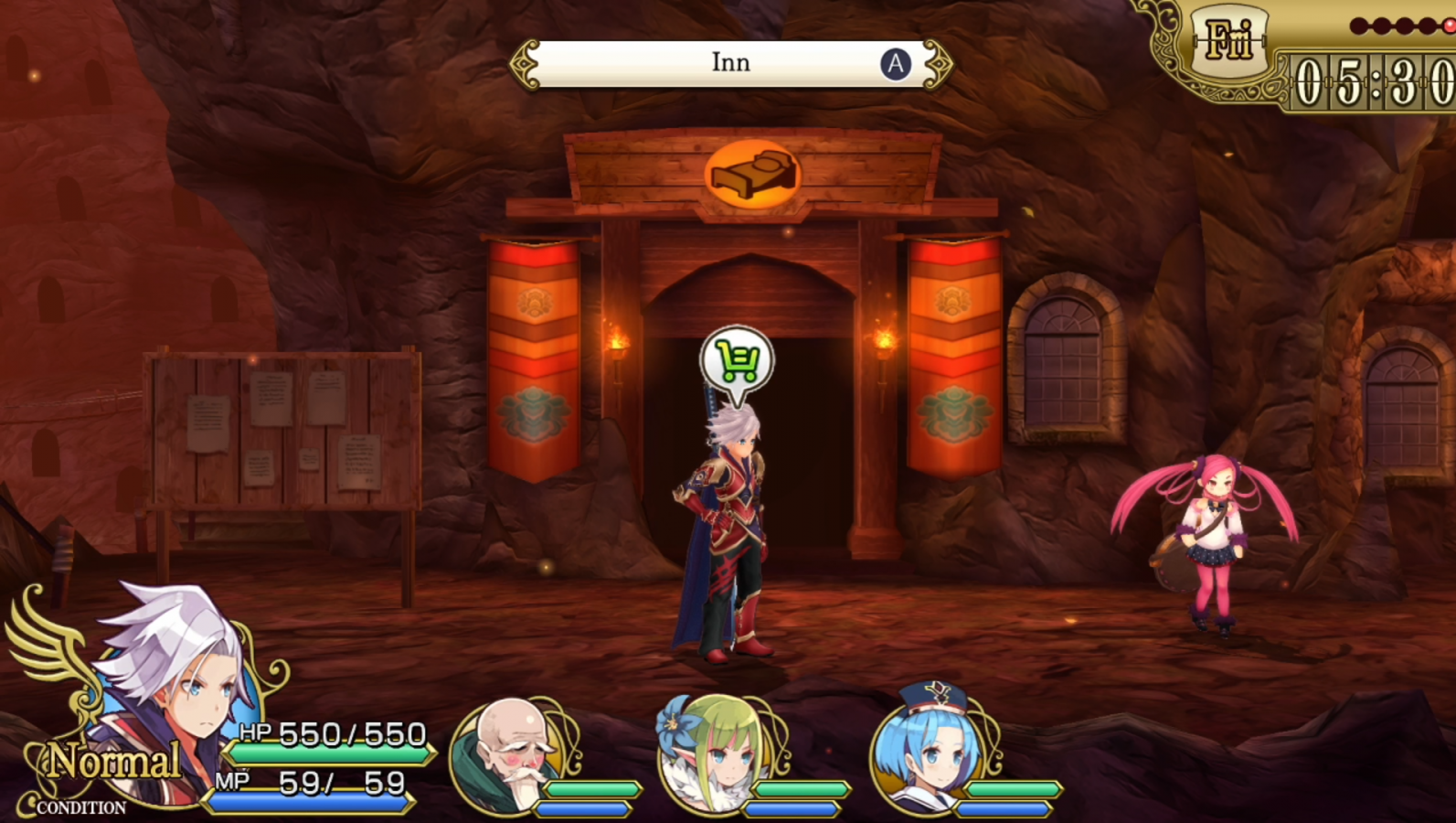 As mentioned earlier, the game takes place after the traditional story has ended, so your hero is extremely powerful, has strong skills, a full 99,999 gold wallet, and really good stats. You’d think that you wouldn’t need a party, but remember how I said you’d get weaker? As your hero gets weaker, his stats, max health, and max MP all steadily decline at various increments. He also loses the ability to use certain spells as time passes. This is due to your body slowly giving out, which is not normally dealt with in RPGs. As a result, your powerful armor and weapon begin to get heavy, causing you to have to swap them with weaker, and therefore lighter, equipment as time goes on. You can find said equipment in chests, in shops, or from defeating monsters. You’ll still be able to fight and move if you don’t swap them out, but it comes at a cost of burdening your hero more. If you get tired or worse, fatigued, then the stat decreases will be more drastic than if you were in a rested state. Trust me, you want those stats lowering in as small of increments as you can. The more your hero can hold his own, the less he’ll feel like a weakling. At times it feels like he becomes the equivalent of a child hitting the monsters with a stick while his party members are the only ones able to do anything useful. It’s a sad experience, but at the same time, it’s one that tells a story that we’ve never really seen.

Speaking of a weakened hero, the later part of the game are where some of the fun drops off. On one hand, it sucks having to essentially babysit and protect the hero, but on the other hand, I appreciate what impact this has on the story. You witness the decline of a powerful hero who has recently saved the world and given his life for it. After all that, doesn’t he deserve to be given a break? Gameplay-wise, my biggest issue with this is the fact that when the hero gets knocked out in combat, no matter how the battle goes, you’re forced to let your party rest and heal up for six hours. That means that if the hero gets KO’d over and over, it eats into your time and powers you towards the end of that five day limit. How great does it feel knowing the last hours of your second chance were spent getting the crap kicked out of you? Not very, that’s for sure. 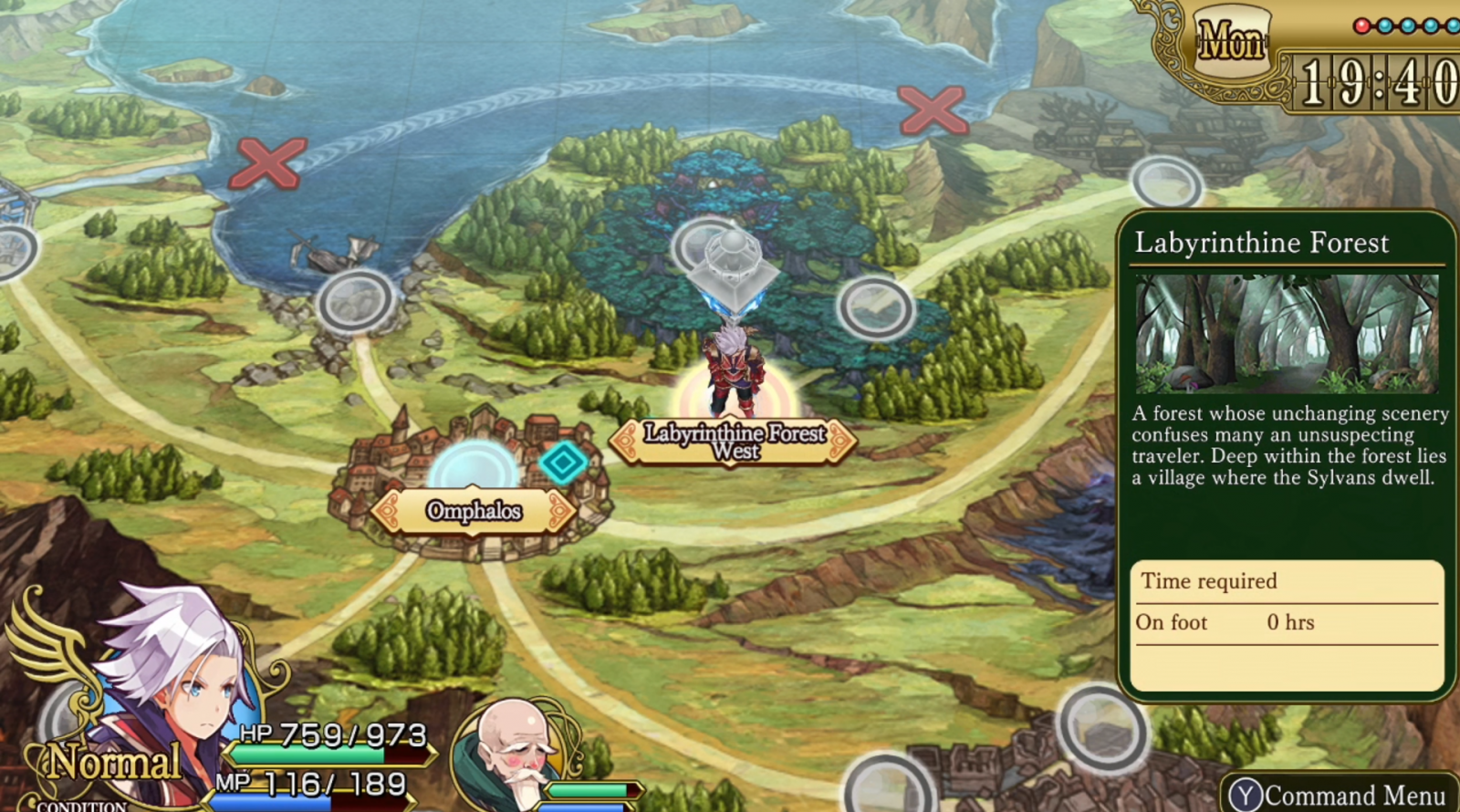 It may seem a little late to be discussing combat, but that’s because the story, time limit, and weakened aspects are more crucial to discuss. Combat is turn-based, with faster characters getting to act first. You can choose to attack, defend, use magic, use an item, or escape. When it’s one of your characters’ turns, you choose an action and a target, simple as that. In the early game, you’ll wipe the floor with foes, but as previously mentioned, combat gets harder later on due to the hero’s weakened state. This early strength is represented in an odd way too; some enemies you run into will just disappear, giving you a bit of damage and some spoils. I got confused the first few times this happened, but from what I could gather, it was as if the hero was so strong that the fight ended instantly. It’s like the game was saving you the time of fighting what were essentially flies compared to your might. The game gives no explanation of this, so this reasoning is the best I could surmise.

When your five days are up, the hero draws his final breath and collapses. It doesn’t matter what you’re doing, the game is over. You are taken to the hero’s funeral and are treated to eulogies from the king and Thomas, along with anyone you’ve managed to help in your limited time. If you accept a request and fail to complete it, you may see that person curse your name and be disappointed in you. I won’t lie, I failed to get Liu’s orb back in my first attempt, which resulted in her muttering that I chose mankind over her people and that she’d see me in Hell. It was harsh, but it was only because of how much she cared for her people. When the speeches are done, you get to see how many people showed up to the funeral and how many cried. Yes, you read that right; who showed up and who cried. That’s your way of seeing how well you did. The good news is that you can replay the days over from the beginning and try for a better outcome. Nothing you did previously matters, but you can use the knowledge of where people and items are to your advantage in the next playthrough. I lived out two second chances in the span of around three hours, so it doesn’t take long to complete. If you learn and strategize enough, you may even be able to help everyone out and get a better ending. Trust me, you’ll be going back to that first day and doing what it takes to make things different. I changed my strategy completely on my second attempt and it worked out really well. 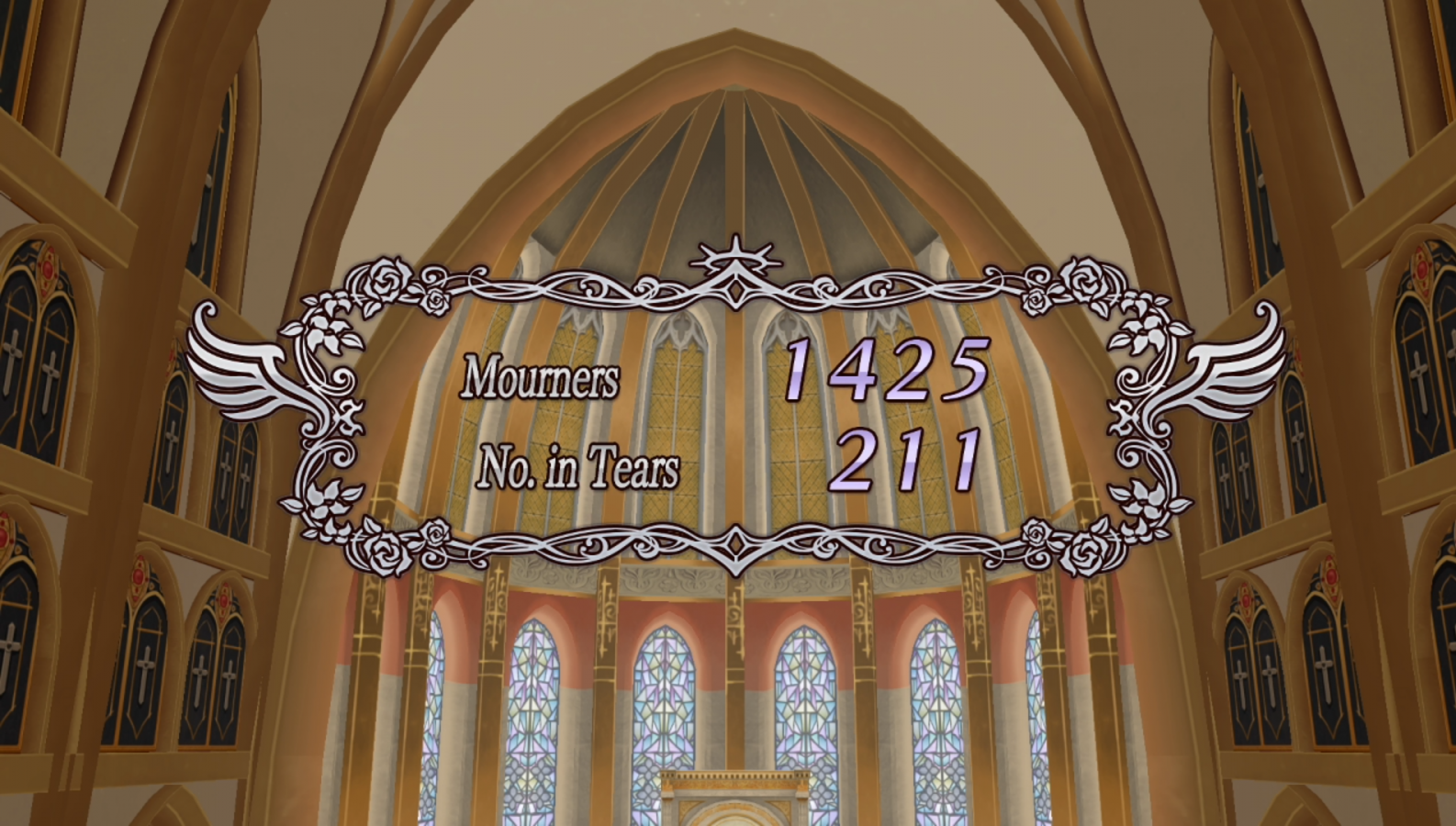 All that being said, Hero must die. again is an interesting game to say the least. It may not have all the adventuring, combat, and length of a traditional RPG, but it has the guts to shift focus to the part of the story few ever take time to notice. The constantly weakening hero gets to be a pain during combat in the later days, so it encourages you to gather up party members. Without allies, the game becomes more of a chore and makes you feel helpless. On the flipside, the time management and desire to live your last days out as a hero who helps people, are endearing enough to keep you playing. The art style and sound design add even more to the game’s charm. I do want to mention that the game is set at a $39.99 price tag, so keep that in mind. Unless there’s some bigger stuff that I’m missing, I can’t fully recommend the game at its full price. If there’s enough here to entice you, by all means go for it. Make those last days count and help the world however you can.