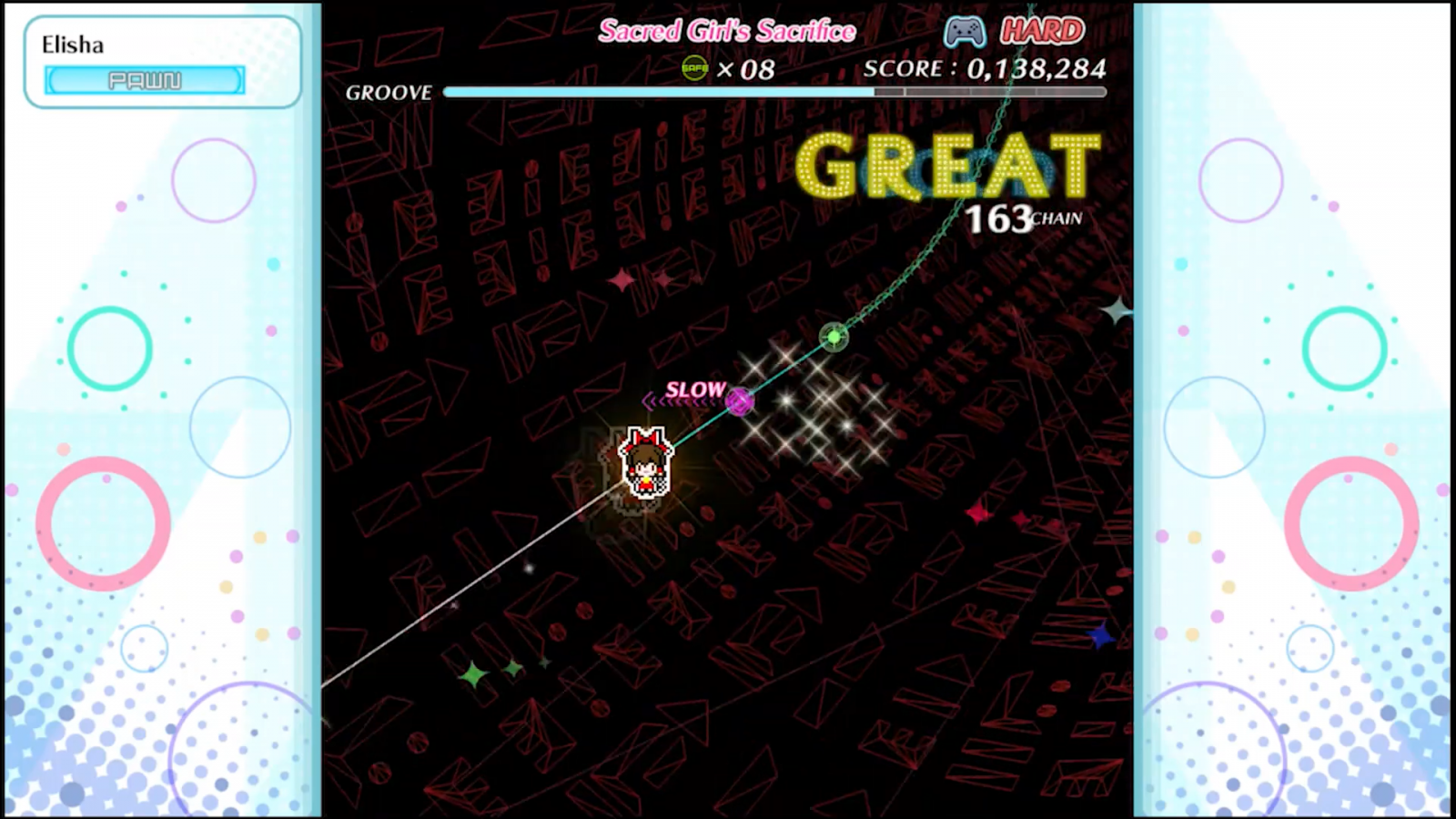 Ever since a Round 1 opened up near me a couple years ago, I’ve been fixated on playing Groove Coaster. Like most rhythm games, it has simple controls mixed with a killer soundtrack that includes everything from Touhou remixes, Vocaloid songs, and even anime openings. I can’t get enough of it, so when Taito announced a western release of Groove Coaster Wai Wai Party!!! (yeah, that’s four exclamation points), I was in a rush to play it. For those that don’t have access to an arcade cabinet, this Switch exclusive is one deserving of your time, even if it may take a while to get used to the controls. 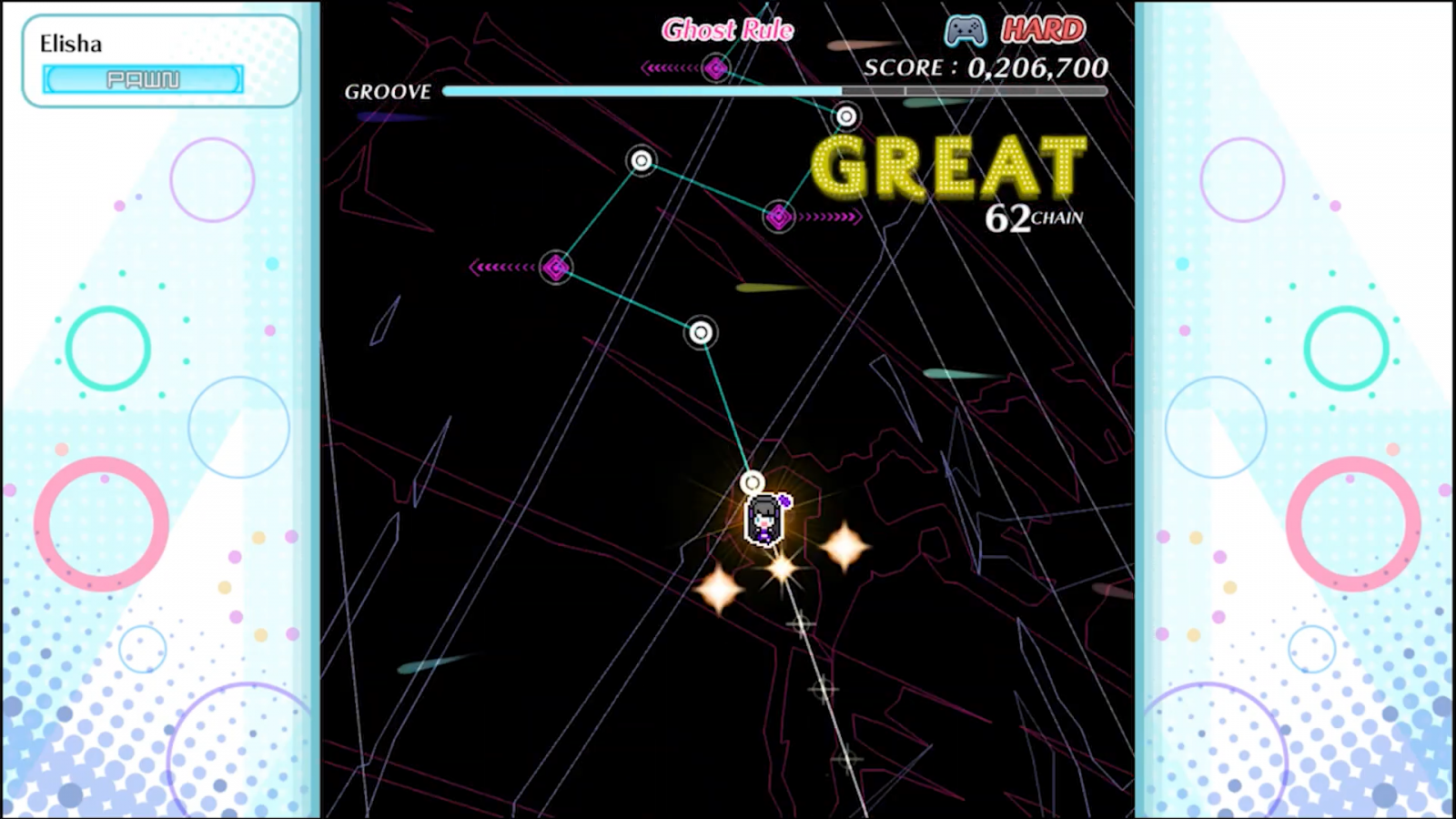 In Groove Coaster’s arcade iteration, you navigate through a line with an avatar as you try to hit beats in order to gain points and meter (which needs to be sufficiently filled a certain amount in order to pass a stage). You also have two different analog sticks as well as buttons on the top of them which you’ll use to either hit beats or match arrow directions in order to clear them. There are other mechanics like holding, tapping rapidly, and wiggling the sticks constantly, but the types of beats you’ll use in a song are displayed at the beginning.

For those who like a challenge, there are multiple difficulties to unlock, and you can use in-game currency you earn to buy items or other goodies that will add to the replay value of the experience. Quite simply, it’s one of my favorite arcade games, but how does it translate to the Switch?

Pretty well, actually. Groove Coaster Wai Wai Party!!!! isn’t a perfect arcade port, but it does translate the controls well enough to be a decent alternative. The sticks are ported to the ones on a pair of Joy-Con (or a Pro Controller), and you can use both sets of face buttons to hit the beats as well. You can also use the analog sticks to hit beats too, making this a versatile control scheme. The Switch version also allows you to use two Joy-Con and use waggle controls to match arrow directions, which is totally not recommended for high level play, but is a nice addition for slower songs.

However, while I do believe that the controls are sufficient enough to enjoy the game, playing the game on hard or master makes me long for the traditional arcade scheme since the asymmetrical design of the Joy-Con make for some cramped movements. It’s the same problem I had with Superbeat Xonic; if you can find a controller that has analog sticks that run parallel to each other, this would make for a better experience. That said, it’s fine for mid-level casual play, but you will have to get used to it. 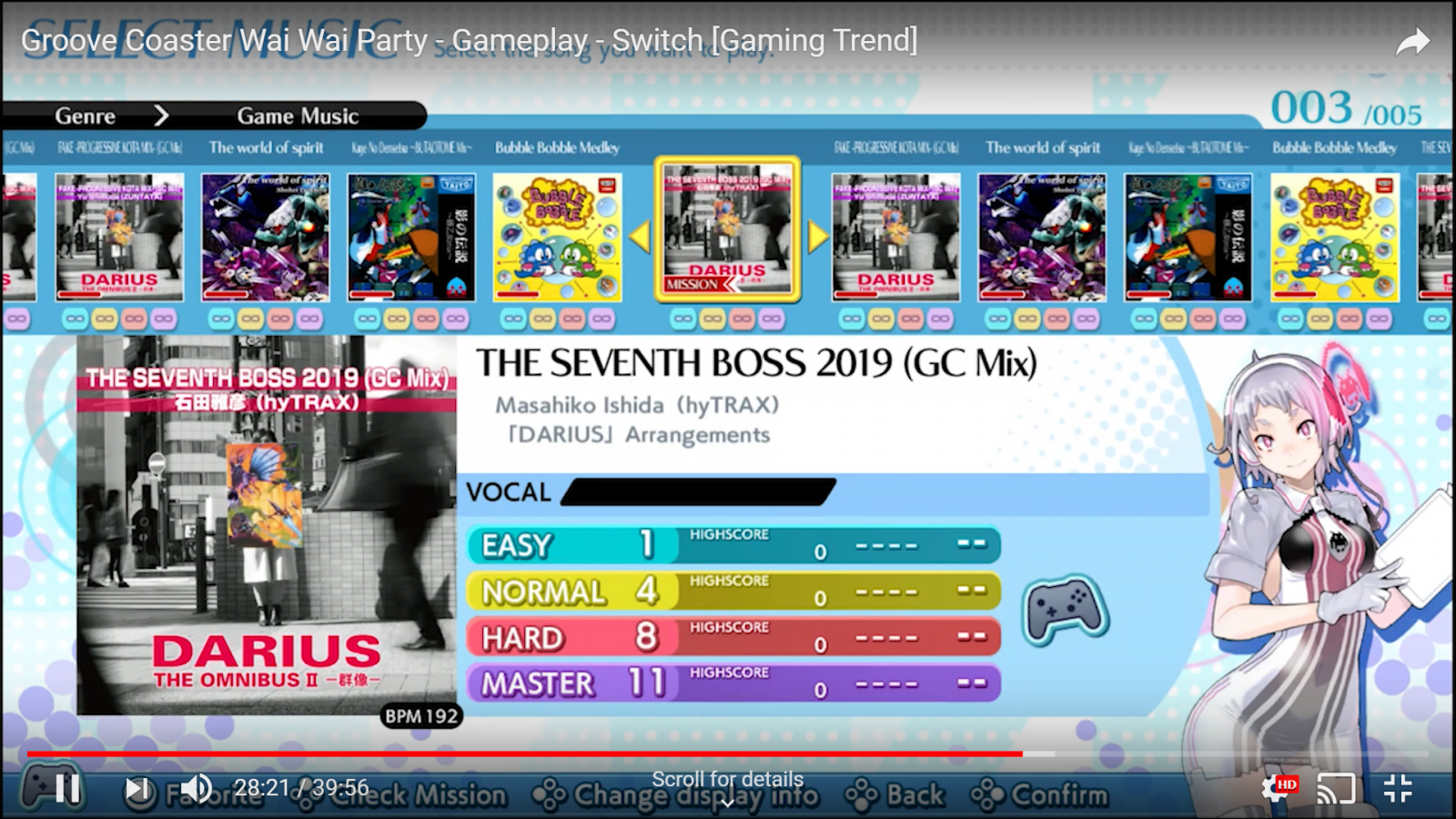 The presentation of Groove Coaster Wai Wai Party!!!! is faithful to the arcade iterations, offering bright colors and some vibrant visuals; that’s saying something for a game that usually has you follow a meandering line the whole time. The technical performance is great docked or in portable mode, and there wasn’t any noticeable slowdown during my playthrough. While I’m not knocking any points away for this, I did notice that I couldn’t save a screenshot or video with the regular Switch capture functions. I know that’s mainly due to performance reasons, but it would have been nice to at least have the ability to take a picture of the end-of-song results screen and share with my social media accounts. 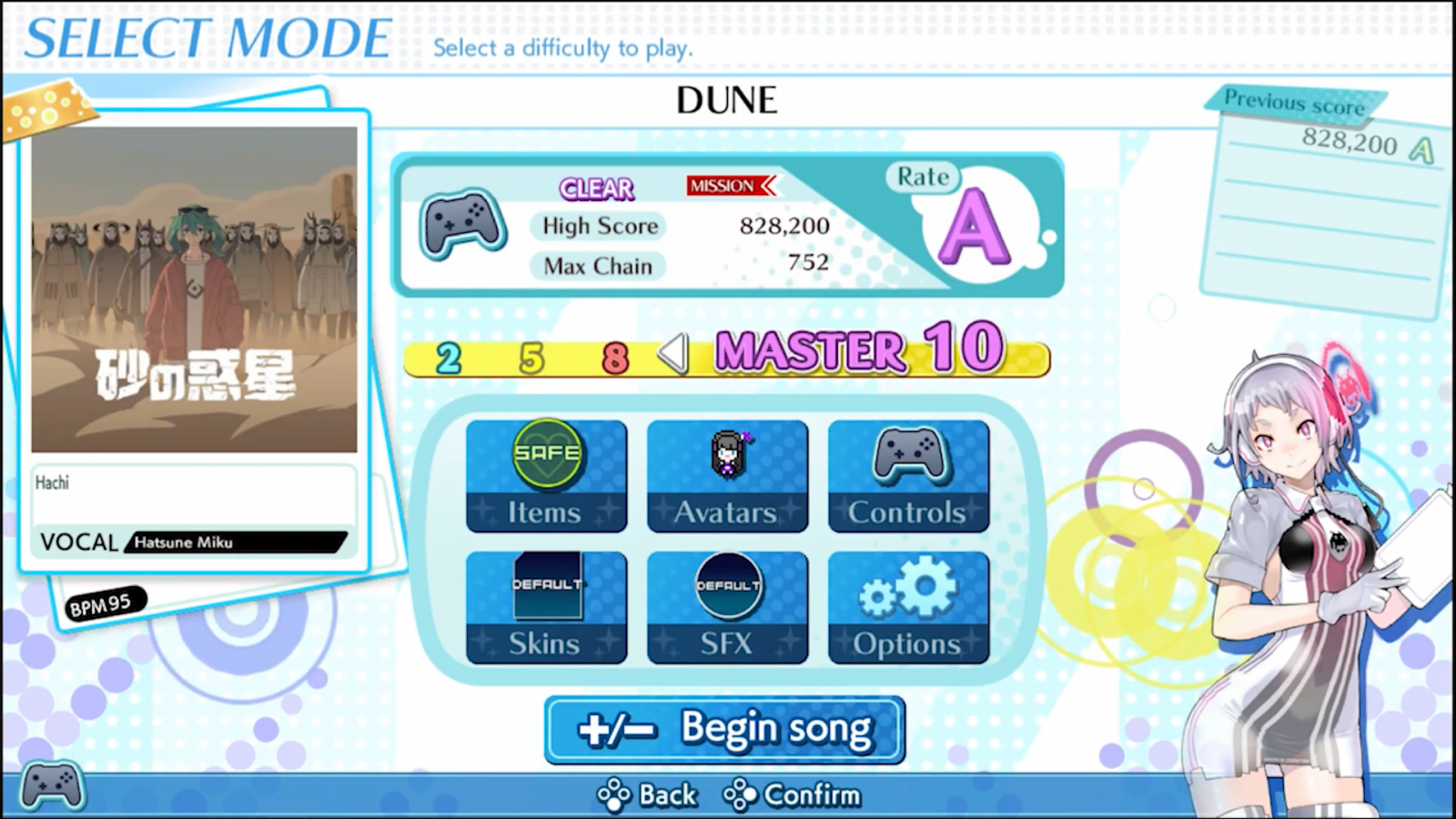 Just letting you know, I had to capture this using a capture card and then screenshot the capture to do this.

As for the music within the game, it’s an eclectic treat. While not everything from the newest arcade versions are here, there’s still a pretty hefty mix of over 100 songs (if you include DLC), mostly centered around Touhou remixes and Vocaloid selections. Considering Hatsune Miku: Project Diva Future Tone is one of my top 10 games of last decade, I was pretty giddy to play newer songs like Ghost Rule and Dune over and over again. Other than those two categories, you also have virtual Youtuber songs (Kizuna Ai gets a few), as well as some iconic anime openings; A Cruel Angel’s Thesis, while overplayed, is still a classic, and I feel like Pop Team Epic arrived on the scene just recently enough to be in most Japanese home console games. The soundtrack is amazing for those that are interested in the eastern side of rhythm games, and even if you aren’t, it’s still a pretty varied songlist.

That said, I’m rather mixed on my impressions with the DLC; Toby Fox is living his best life in 2019, and seeing a whole pack of Undertale songs was impressive, but the fact that the game only offers $16 10-song packs (there are a few of them available now), feels a bit pricey at the moment. The base game itself is a good enough value at $60, though it may be hard to recommend for someone who has no experience with the rhythm game scene. I would have preferred cheaper packs with fewer songs, especially since they increase the songlist from the base game a substantial amount (in the case of the Undertale pack, it effectively doubles the amount of songs in the GAME folder), but it’s a minor gripe. 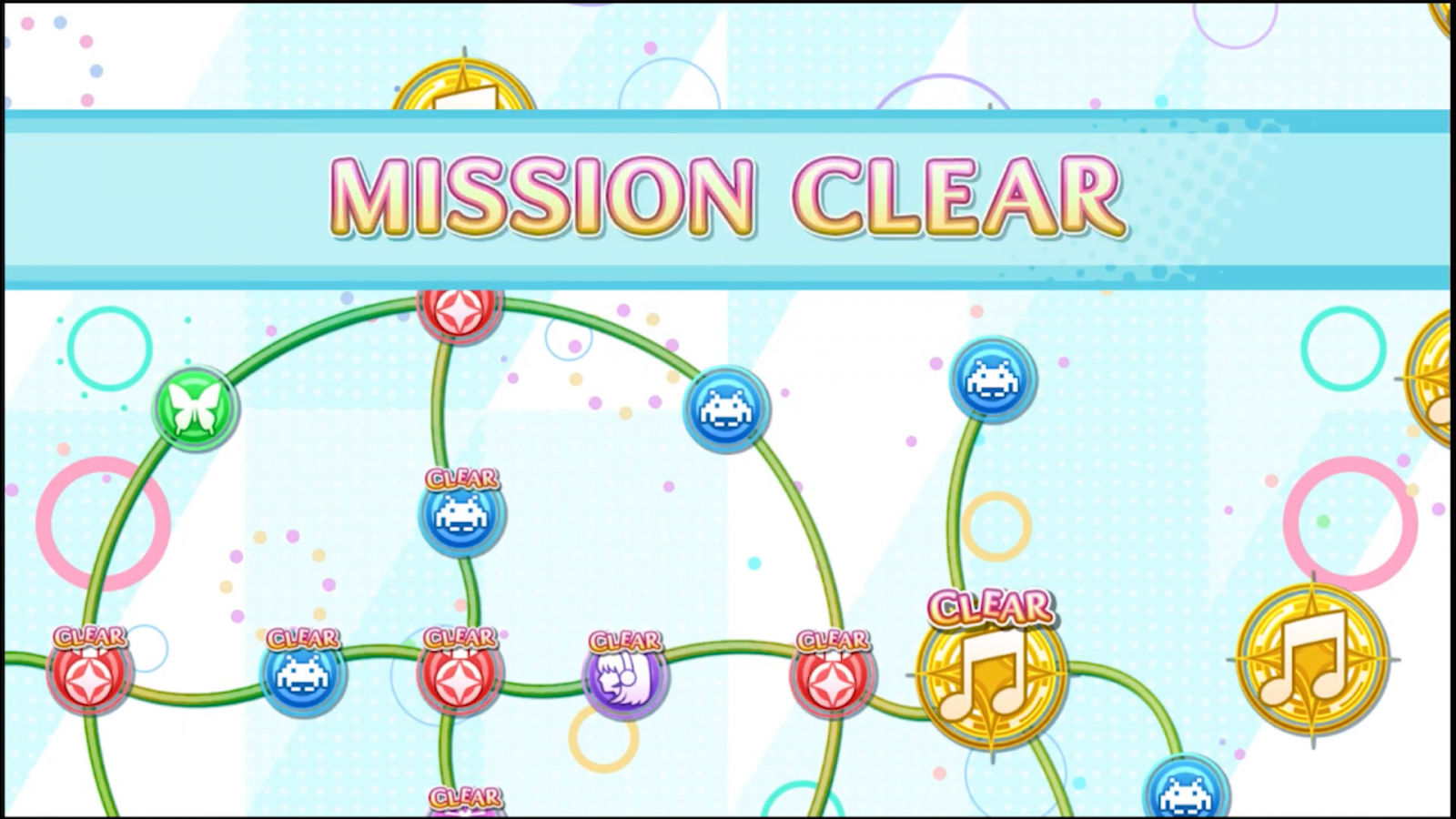 Groove Coaster Wai Wai Party!!!! does have a few more tricks up its sleeve to entice those who still play in the arcades, however. There are a bunch of unlockables, which grant you different avatars, songs, and even item modifiers; they’re all conveniently located in a missions sub-menu that you can access at any time. I like this sense of progression because it encourages you to try out different songs (as there are some missions like “clear X amount of songs in the GAME folder” or “get an S in a specific song”). It’s a natural unlockable system that’s refreshing and works better than a campaign would. You can also play a multiplayer session, which is great if you have friends over, and try out challenges where you have to clear a predetermined playlist of songs with limited health. These extra features will cater towards veterans of the series, but luckily newcomers that might not be able to land high scores can be able to complete missions using in-game currency, which means even if you only play through easy or normal songs you can unlock everything with enough grinding.