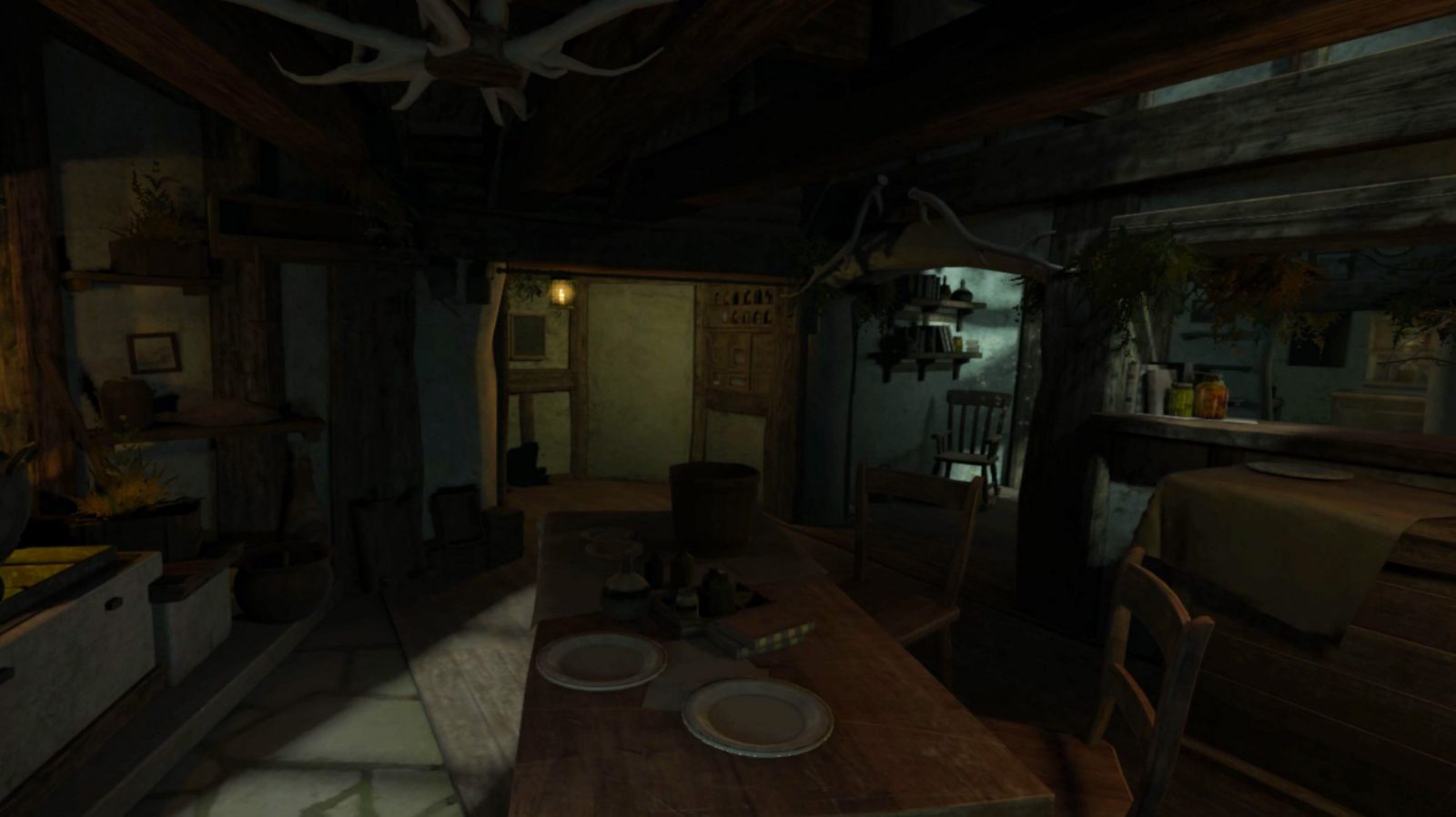 I didn’t know what to expect when I jumped into this one. I had originally played the series when it was available as a mobile game, and those were fantastic. They were effectively little levels with puzzle boxes that you had to mess with to reveal the grand prize or piece of the story. Then, the developer, Fireproof Games, decided to make the jump from the mobile platform to try their hand in VR.

If you have played the series before, then you’ll know what the gameplay is like already. But for those who haven’t, there are essentially two states to the gameplay. You’re either jumping between small zones or working on puzzle boxes. And that description is no disrespect to the game since that’s what the series was originally designed as. The zones are the places where you can teleport to, where you interact with dials and levers (typical puzzle game mechanics), whereas the puzzle boxes are the boxes that you have to open piece by piece to get inside. That’s the general description of it, though there’s more to it than that. The developers have done a great job incorporating all kinds of creative puzzles into the gameplay. These include altering a key using a box that controls the phases of the moon, filling containers with certain liquids that you pour into a cauldron to reveal an object inside, or setting a pendulum lunar clock to the right position to release a key. Some types of puzzles were used a few times over, but they weren’t overused in the slightest. Also, everything that you need to unlock is in front of you at torso height. So you can play this one sitting down and you’d have the same experience as standing up. And, if you’re having trouble completing the puzzles, you’re given three hints to every puzzle, which are revealed to you over some time. 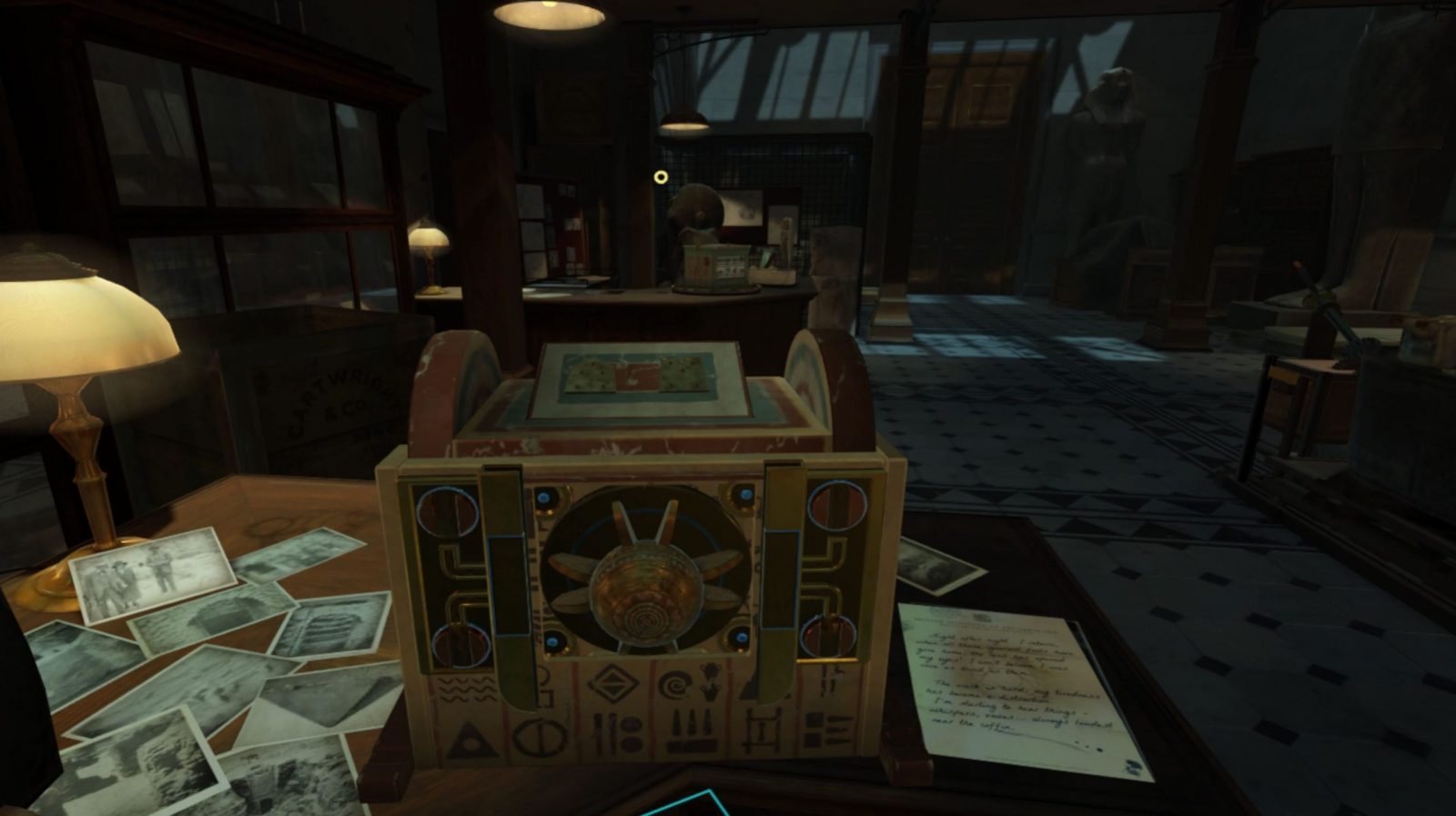 One of the many puzzle boxes you will interact with.

Just like the original games in the series, the story is mysterious. I’ll try not to spoil the story either since it’s quite intriguing. You begin on a balcony overlooking part of London. You’re a detective, investigating the disappearance of an archaeology professor, and currently, all you have are a few slides detailing his backstory. You’re left with a note, which details that a parcel was left for you in a safe, and the safe’s key is sitting in a drawer beside it. So you take it out and place it into the keyhole. Immediately, tentacles of an eldritch abomination slide out of it, burning away the key. Damn, can’t get that parcel now. But then you have an idea. Since this is the police department, and it’s the 1900s, there’s an old-fashioned safecracker in the evidence room. So you head to the lazy waiter, but the combination in for the evidence box storing the safecracker, and pull it up. Placing it on the safe, and getting it open, you soon realise where those tentacles are coming from, and what that parcel was. And quickly enough, you realise how much deeper this rabbit hole goes.

I have to say almost immediately that the $30 price point is a bit much, especially since the puzzles are easy and there are only 5 levels (I managed to complete the game in just over 3 hours). Let me explain why they were so easy with an example. A real-life puzzle box is something that has multiple sliders, levers, switches, combination locks, etc. on it. Let’s say there are no more than 40 things to do on that box, and only one thing can operate at a time. So you just need to operate the first correct mechanic, then the second, and so on. They’re typically very linear in their approach to completing them, and effectively all you need to do is use a process of elimination to find the next correct mechanic. That’s kind of what the puzzles are like in this game. While some require you to think hard about how to finish them, you are given so much information to complete them that the difficulty level drops substantially. Plus, it’s not that hard to find that information; they don’t hide it under anything since the only things you can interact with are either notes or the puzzles themselves. If you can’t see a solution in front of you, you also have a special lens that you can put on to alter your vision. Sometimes you do this to see through a special kind of material on a puzzle or through a note to reveal more of the story, other times you’ll do this to reveal the correct combination to a lock. If not, you can just use those hints with no penalty to the non-existent scoring system. One of the few times I had to stop and think of a solution was the very first puzzle, which is the combination of how to retrieve the safecracker. That puzzle had you cross-reference the names in front of you and their positions in the list to find the right combination. I enjoyed that, but that level of critical thinking wasn’t always needed in the puzzles henceforth. Again, going back to my example, I could just brute-force my way through puzzles if I had trouble otherwise. That took away a lot of the fun of the puzzles. Having multiple red herrings in the player’s path would’ve easily prevented that since the only things you interact with during your playthrough are the puzzles and notes. 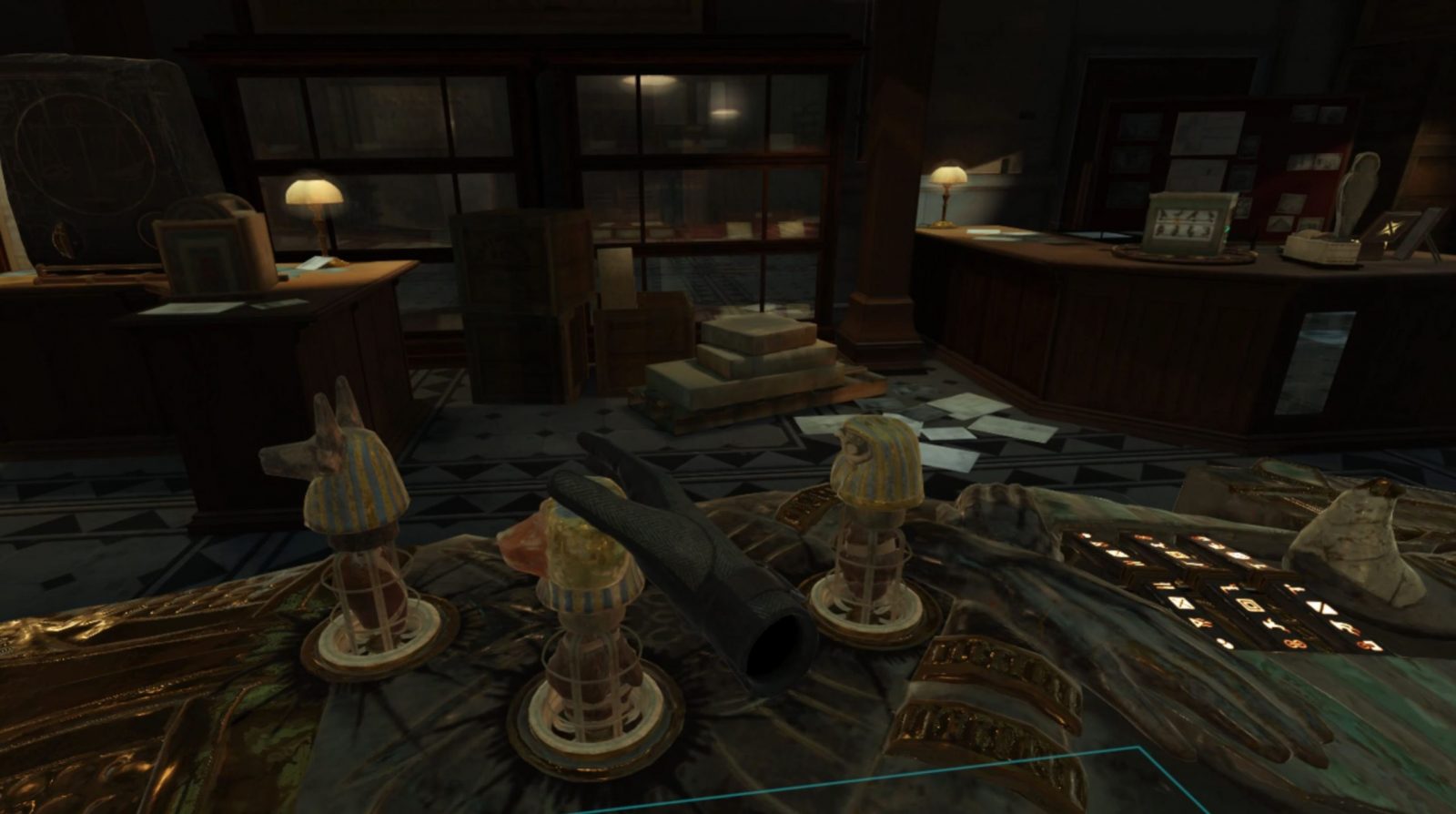 I don’t know what the combination was for this puzzle, but with a couple of guesses I easily got it open. Too easily.

The levels were also very short, and again I managed to get the game done in just over 3 hours. Again, that $30 price point isn’t worth it for that cost. That being said, there were plenty of good things about those levels. For one, the devs did a great job of hiding a lot of the level from your vision. Just when you thought you were done, there was more to the story to be revealed and more puzzles to explore. The levels also changed dimensions multiple times; at one point you’d be operating a small puzzle box, the next you’d have to teleport inside it to alter its internals, then back out again until you’ve cracked it open. That level design was initially incorporated in the series’ mobile games, and it works just as well in VR. It opens up a brand new environment for the player, especially since each level is typically in a small, enclosed room or building. It has very clever level design, so hats off to Fireproof Games for making it so perfectly done.

In terms of comfort, there’s not much to share. You’re limited to teleporting, so you definitely won’t get motion sickness, especially since you won’t need to move around that much. When you do need to move, you’re also able to use snap-turning, and when you do (which is also present when you teleport) there’s a brief flash of black so it’s not jarring. Another great feature.

On a more personal opinion of the title, I would’ve really liked the opportunity to move freely around the levels since their design was very creative. On one level I was in a 1900’s police station, but on another level, I was in a beautiful church. I could only see as much as the games allowed me, and there was so much to see that I felt like I didn’t get as much of an opportunity to take it all in. I understand the reasoning for it since they wanted to mimic the mechanics of the other games in the series, but since VR is such a unique experience it’s best to utilise every aspect of it as much as you can. For that same reason, I’d have liked to be able to interact with a lot more objects, instead of the things only relevant to the puzzle. Like I said before, that design choice allowed for the opportunity to brute-force many, many puzzles. If I could interact with other things, and get caught up with them, then the completion of those puzzles would have been a lot harder. 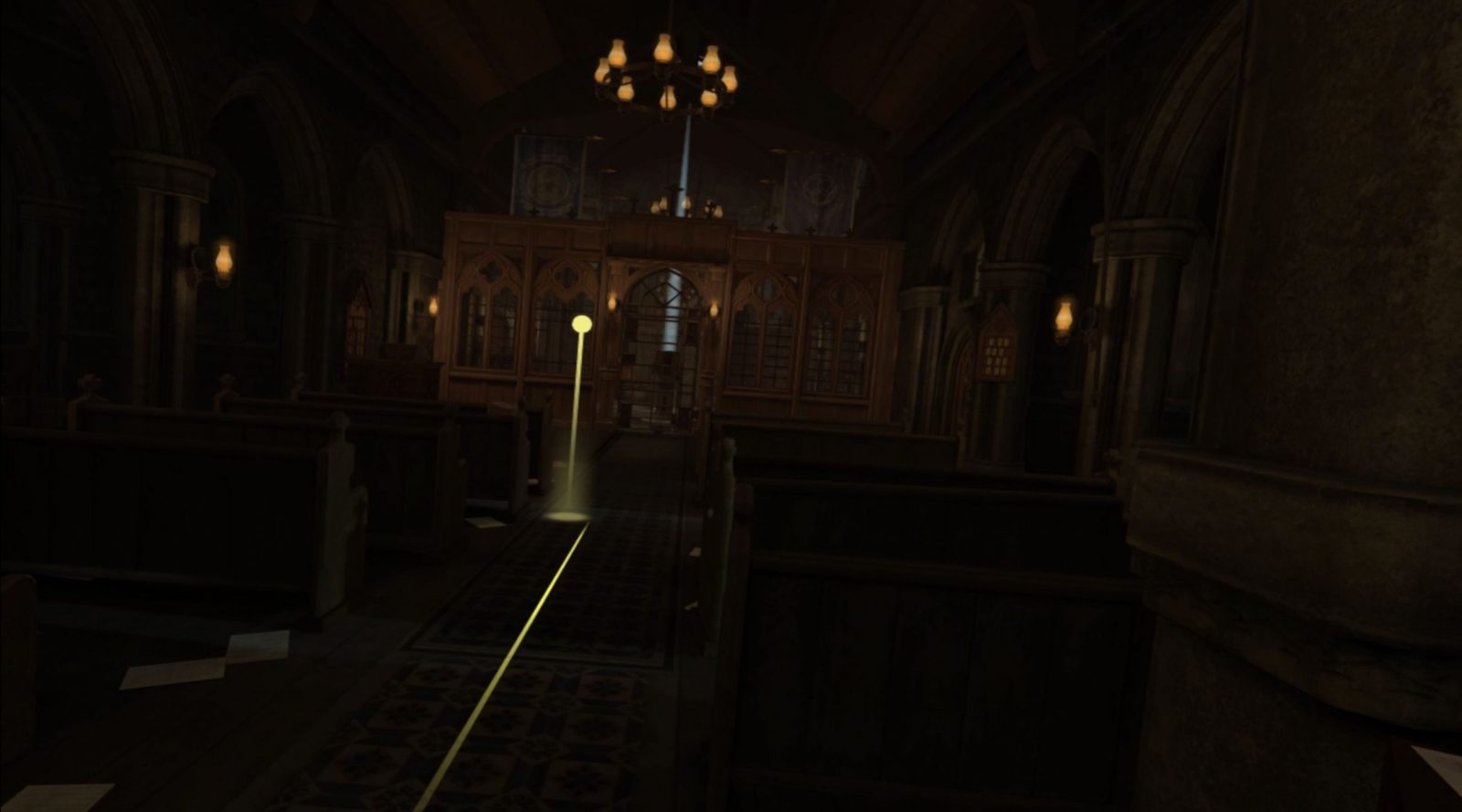 A real shame I couldn’t explore this location freely.

The Room VR: A Dark Matter is so close to being a perfect puzzle VR game, but misses the mark because of design choices pertaining to the original mobile series’ style. With VR, you need to implement everything it can offer to provide the perfect experience, instead of leaving the player only able to interact with the puzzles themselves. But, while it’s not the best VR title that it could be, it’s still an amazing game in its own right. The levels were creative and detailed, and the puzzles were all unique, which is a refreshing change of pace for many VR titles. Plus, if you were a fan of the original series, then you’ll most definitely enjoy this version of those games.