No end in sight --- Dungeon of the Endless review 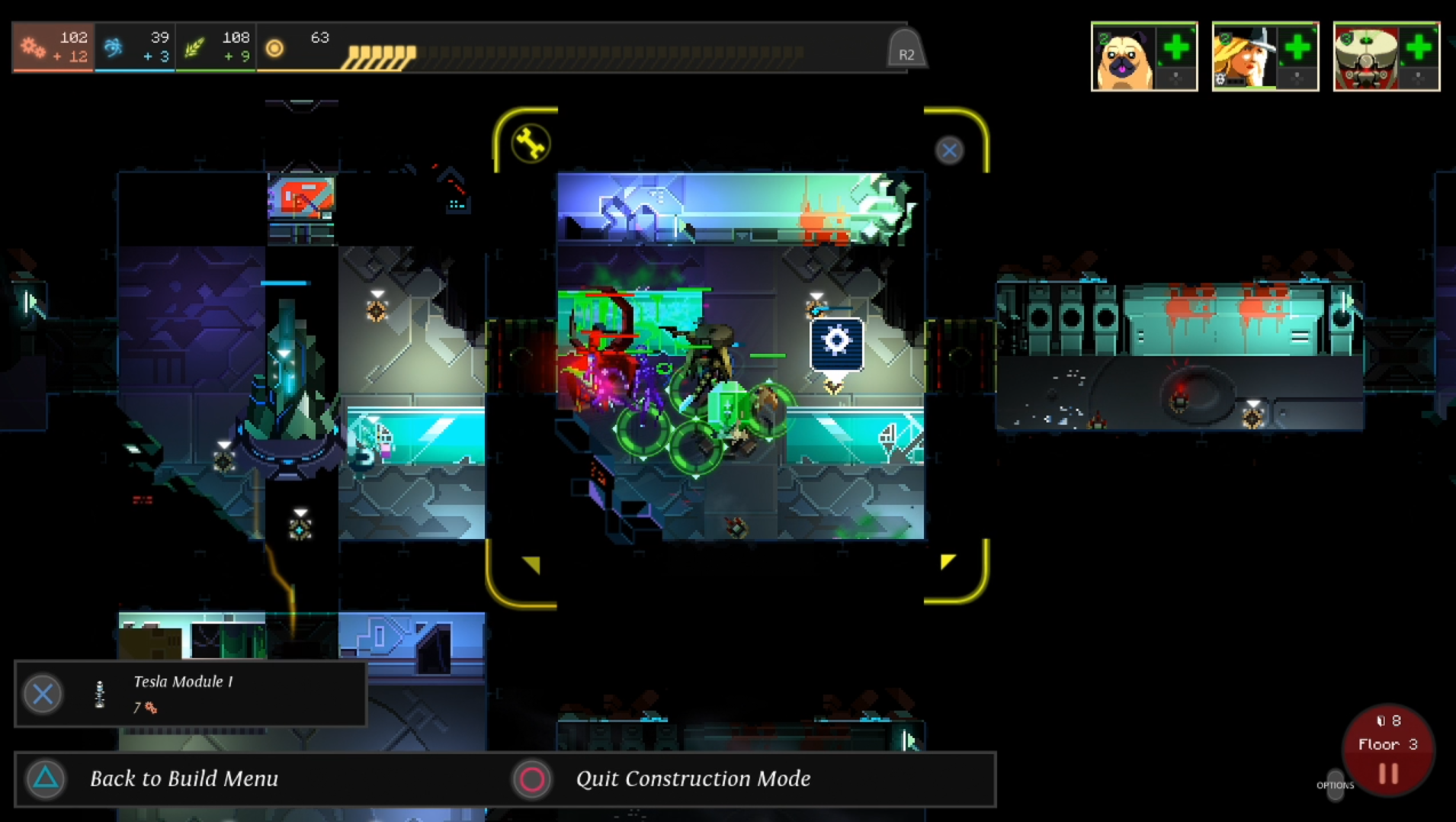 A spaceship is crashing and the escape pod is being launched. It seems as if only two people can fit inside it, so it’s up to you to decide who is going. You don’t know exactly what you’ll encounter upon landing, but what you do know is that you’ll need to fight for your lives and make it to safety. This premise mixed with roguelike elements, tower defense gameplay, and resource management creates Dungeon of the Endless. It’s simple to start, but gets more complicated as you are forced to manage various energy resources while keeping your team from dying during combat. It’s no walk in the park, but that’s the biggest appeal of the game. Will your chosen team survive and escape the dungeon’s floors? Plan carefully and you just might.

The aforementioned escape pod premise is how you choose your characters to start with. You have around ten characters available from the beginning, but you can unlock a fair amount of others by finding them in the dungeon, recruiting them, and keeping them alive for at least three floors. Doing so unlocks them for use during future runs. Each character has their own stats for health, speed, damage, and wits, so pick your team based on what you’re hoping to accomplish. I personally opted to go for the warrior pug and the beastmaster because they have really good health, speed, and damage stats. Yes, one of the best starting characters in this game is a dog. 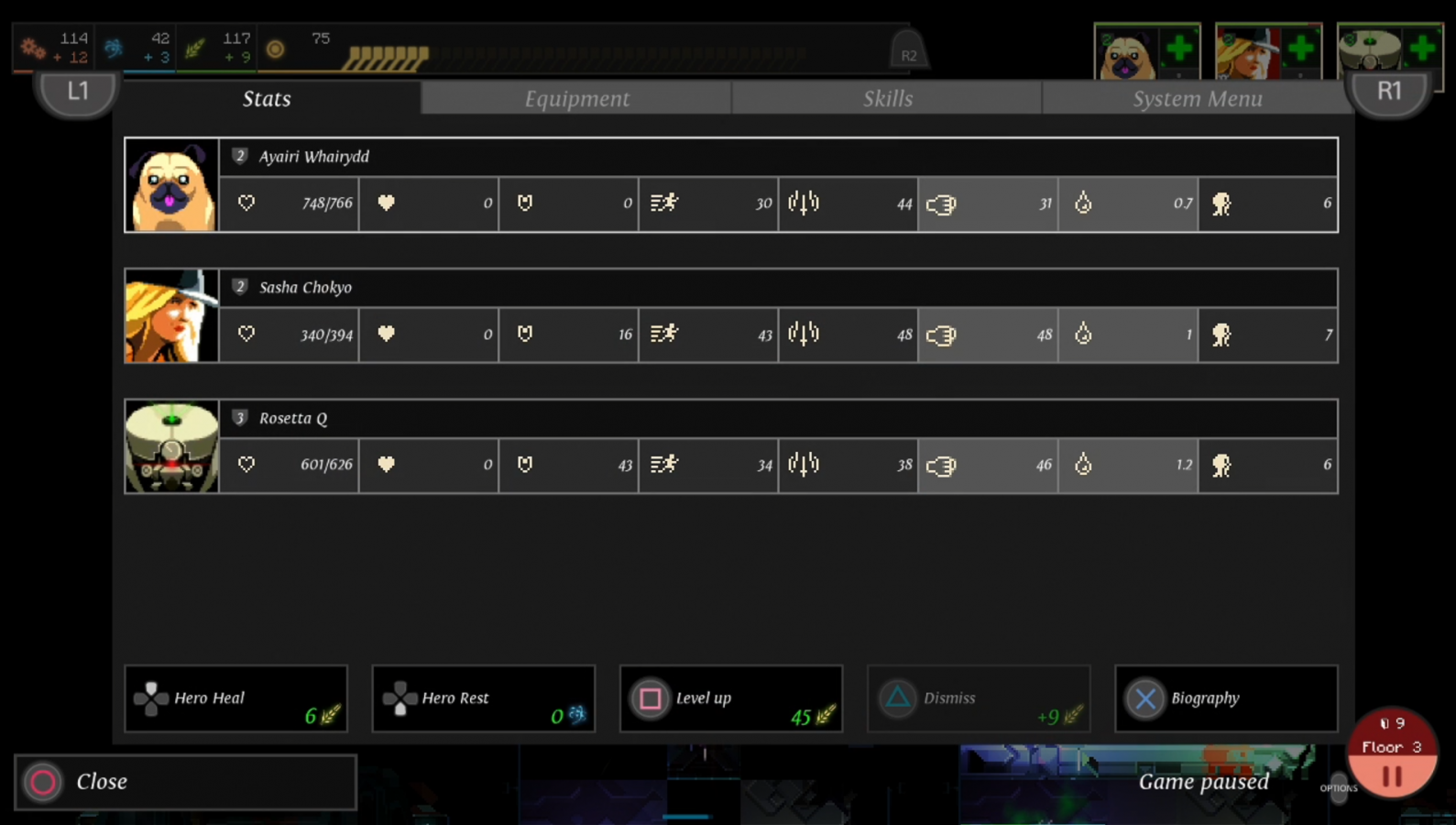 Besides your characters, you also can choose your starting escape pod. The various escape pods each provide different effects for your team during the run. The basic escape pod gives no bonuses, but also has no penalties either. The other pods that have benefits also typically have some sort of downside, so you have to weigh your options and decide if a specific weakness is worth a certain strength. Just like the characters, the other pods can be unlocked, although in a different manner. Pods are unlocked by either completing a run and escaping the dungeon with the previous pod in the list, or by fulfilling some special criteria stated on the pod menu. For example, one of the pods can be unlocked by spending 1000 food to heal characters during one run. That’s a lot of food, but if you can pull it off, you get that pod without having to complete a run with a specific pod. I think it’s neat that the escape pod can affect your run so much, especially with how varying the benefits are.

The gameplay revolves around you telling one or more of your characters to go to different rooms of the dungeon. You can control them separately or all as one. I’d recommend keeping everyone together whenever you can. Strength in numbers is definitely true here. When in a room, your characters act and fight on their own; there’s no micro-management involved. Your goal is to unlock rooms and defeat enemies until you finally discover the exit room. The location of the exit room on each floor is random, so you may find it quickly or it may take you a while. When you find the exit, you won’t immediately leave. You actually have to make one character go back to the crystal in the first room of that floor (more on that later) and trigger the exit sequence. Upon activating this, enemies start spawning from any rooms that haven’t been powered and make their way to either your characters or the crystal. Once your team is in the exit room, then you can press R2 to leave and head to the next floor. There are 12 floors to make it through, then you can finally escape the danger. 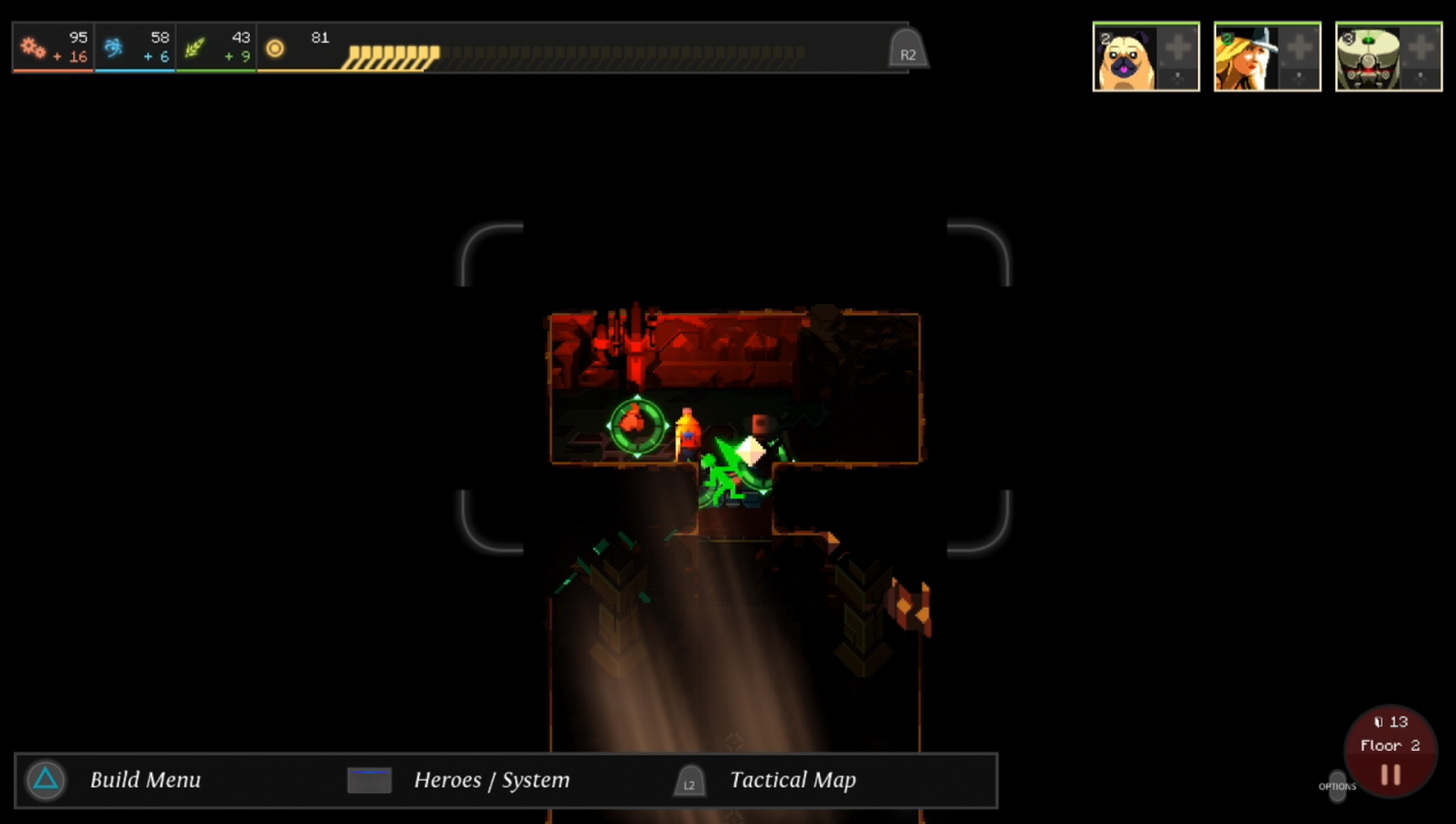 As you head from room to room, the contents of each room is hidden until you’ve opened that door. There may be enemies, shopkeepers, recruitable characters (you can only have four on a team at once), nodes that you can build stuff on, research crystals, and more. Unless it’s stated that a room is being powered by a mysterious force, then you must power it by using a block of energy that’s shown in the upper left corner. You start each floor with two blocks available, and slowly earn bits of energy by defeating enemies and opening doors. When you reach certain thresholds, then another block gets unlocked for use. You typically won’t earn enough energy to power every room on the floor, so you have to choose wisely. Dark rooms can spawn enemies who will charge towards your crystal at any time. When your crystal takes damage, the amount of energy you have available reduces. If it takes too much damage, then it gets destroyed and you lose. So, not only do you have to keep your team alive, but you have to protect your crystal as well. It would be tough enough if you only had your team to defend it since you have to explore to escape, but thankfully, that’s not the case.

Throughout the rooms, you’ll notice there are small nodes in every room, and some big nodes appearing occasionally in rooms. The small nodes are where you can build tower defense gadgets such as turrets, claymore cannons, poison gas dispensers, tesla coils, and so much more. You start each run with only the standard prison prod gun, but you can unlock others by finding research crystals and spending science points. After the designated number of doors have been opened after starting the research, then that gadget is available to build during the remainder of that run. The smoking gun is one of my favorites because it is a fast-firing, powerful machine gun. Research crystals can also level up blueprints for gadgets that you’ve unlocked during the run as well. The big nodes are reserved for fabricators that increase the amount of certain resources that you earn each time you open a door. You can increase the amount of industry, science, or food points that you get. For example, if you want to build a lot, you’ll want to focus on industry points because you have to spend those in order to build. 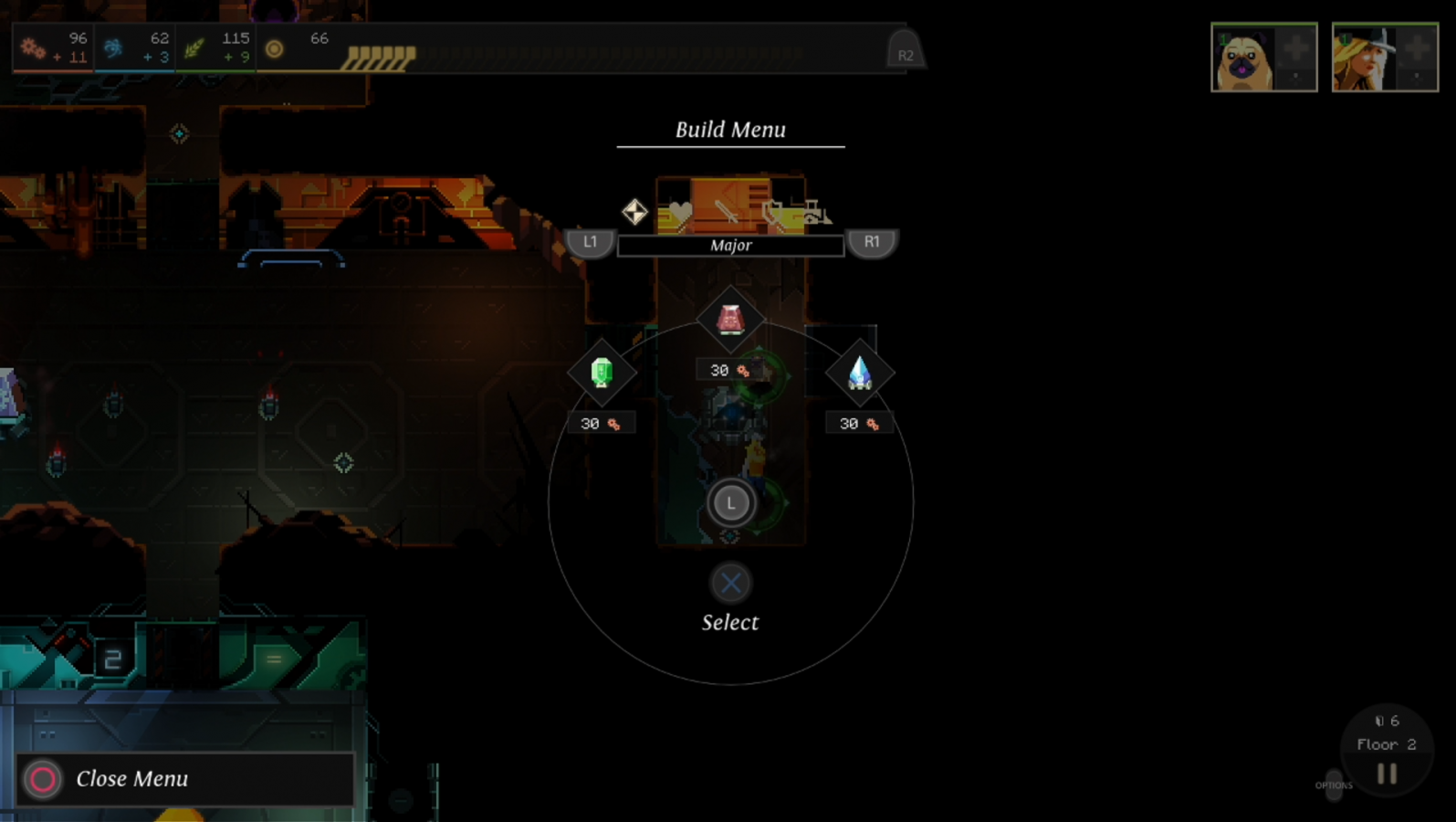 As I just mentioned, you have industry, science, and food points that you earn each time you open a door. Industry points are used to build nodes, big and small, science points are used to research new gadgets or upgrade current ones, and food points are used to heal characters, level them up, or recruit new teammates that you find in the dungeon. You can spend a small amount of food to heal individual characters by going to the heroes menu, hovering over who you want to heal, and pressing down on the d-pad. If you want to level someone up, you do the same thing except you hit the triangle button instead of the d-pad. Leveling characters up takes a lot more food to do, and it continues to raise in cost as they get higher in level. It’s definitely worth it since it raises some of their stats such as max health, strength, and speed for the remainder of that run. For this reason alone, I’d also recommend building food fabricators when you can. You have to find a good way to balance what resource you want more of based on what you want to bulk up on. Do you want to build as many gadgets as possible? Go for industry. Do you want a wider variety of powerful tools? Prioritize science. Do you want your characters to do the heavy lifting? Gather up some food. No matter what you do, you need to plan carefully and not get cocky. 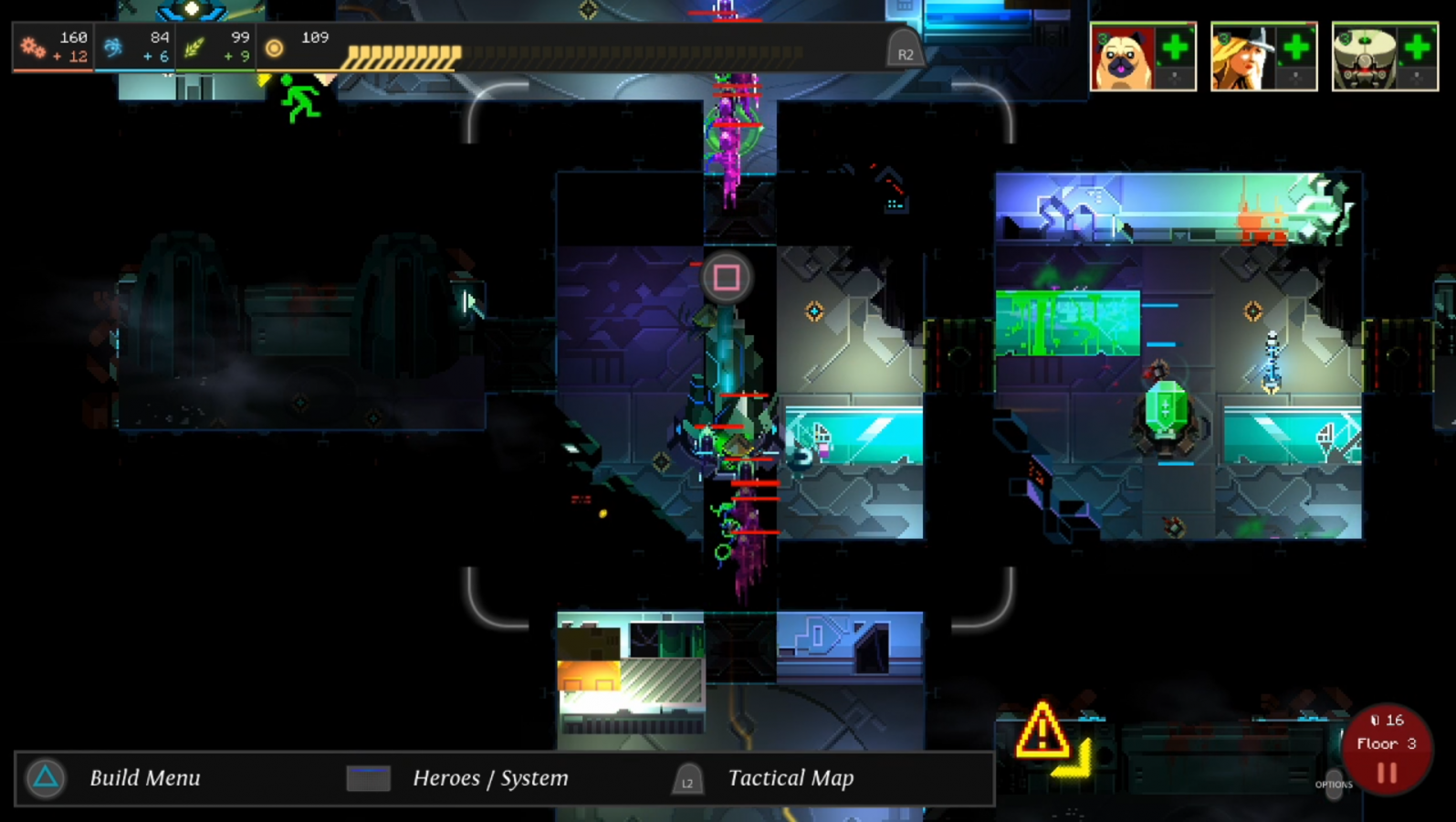 Dungeon of the Endless isn’t too far off with using the term endless. There are plenty of characters to run through the game with, along with a fair amount of different pods to alter the experience with. Since it’s a roguelike, that means you can keep replaying as much as you like and try out different team combinations. Unfortunately, some characters are clearly better than others, which kind of makes you lean towards them rather than trying some of the others out. It’s a shame because there are some interesting looking people in this quirky cast, and I’d like more of a reason to be some of the weaker ones. There’s not much in the way of story, but there’s enough of a premise there to get you engaged in the characters’ survival. The difficulty modes are labeled as Too Easy and Easy, but those aren’t exactly true; I’d equate them more to an Easy mode and a Normal mode. They both provide enough of a challenge to make sure you can’t walk through the game with no problem. You have to think carefully and manage your resources if you want to make it out alive. Will you meet your end in the dungeon of the endless? I sure hope not, so let’s try to make it out alive!