Heavy is the head --- Yes, Your Grace Switch review 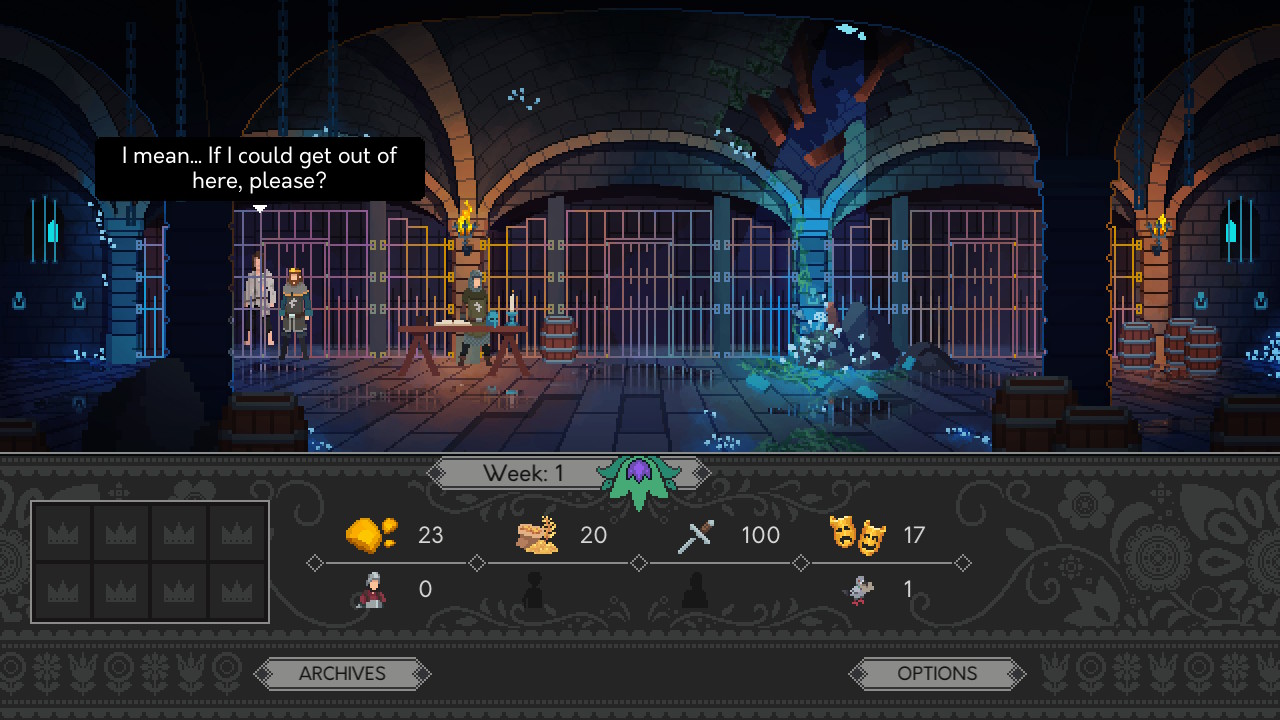 It’s not easy being king, and Yes, Your Grace by No More Robots makes that amply clear. Yes, Your Grace began with a Kickstarter campaign and fought a long, hard road to finally make its way onto Steam, where it has achieved a Very Positive review status. It is now making the jump to consoles, and we got to dive in and rule the kingdom of Davern on the Nintendo Switch.

Yes, Your Grace falls somewhere between a resource management game, an RPG, and plays very much like a visual novel–speaking only in terms of mechanics, as both visually and thematically, it is very different. It’s like a storybook where the main beats are the same, but you’re able to pick between a few different paths to get there. As a master-of-none game, it’s not quite an immersive simulation game, and it feels a little watered down to be an RPG, as while your choices do matter, they’re not going to have massive impacts on or change the course of the story. That said, if you know what you’re getting into, Yes, Your Grace is a delightful little indie. 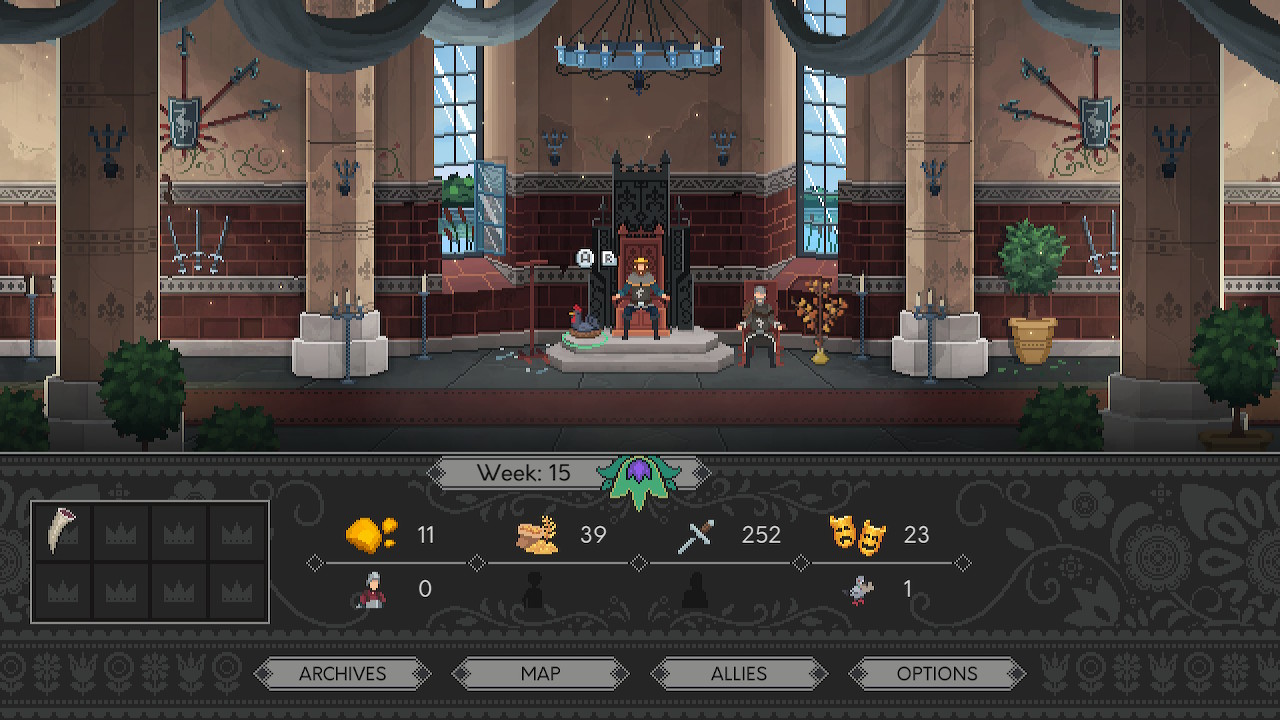 Yes, Your Grace was clearly created to be a PC game, and while it plays flawlessly on a console, the controls can be a little cumbersome. It took me a while to figure out how to even access the main menu, and I often still struggle with the command to send scouts to investigate areas. The controls are distracting, but not enough to truly detract from the experience. While Yes, Your Grace feels like a game which should have a ton of replayability, I found myself slightly disappointed here. While there are plenty of combinations of allies to befriend and slightly branching sub-stories to explore, the main plot points play out in largely the same way regardless of decisions you have made, which detracts from the replay experience.

You play as King Erik, ruler of a small and not overly impressive land known as Davern. No sooner do you settle into the routine of running your kingdom, listening to partners, helping where and when you can, while still trying to keep the royal coffers filled, than your family’s dark secret is revealed. Before you settled into your fairy tale life with your wife and three daughters, you made a promise–and a newly crowned barbarian king has come to collect on it. And so your struggle to protect your family, recruit allies, vanquish a foreign army, and keep your daughters happy begins. 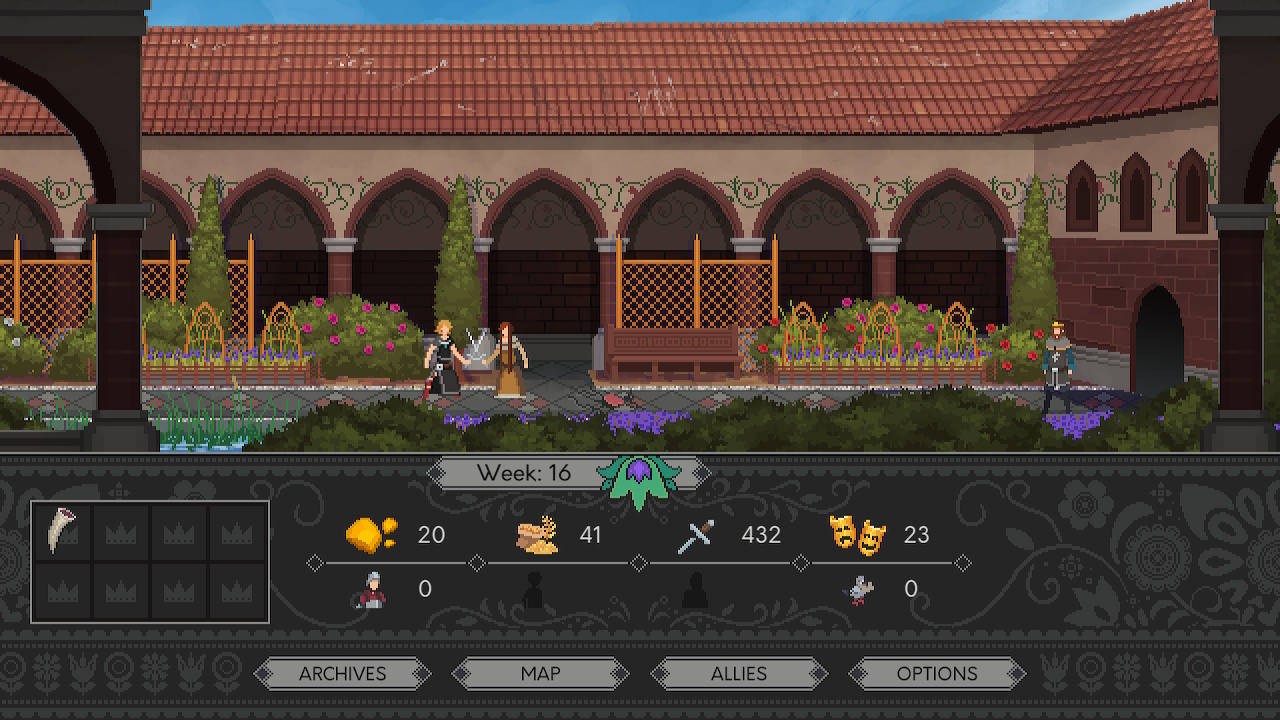 The first thing I have to say is that Yes, Your Grace looks amazing. This game serves as a great example of modern pixel art, animations look amazing, and most characters are distinct and recognizable. The animals are especially well rendered, from the perpetually self-grooming cat, to the lie-detector chicken. …Did I mention the lie detector chicken? Yes, Your Grace is filled with quirky humor and delightfully odd characters. I especially appreciated the treatment of Erik’s daughters, each with her own distinct personality, and Princess Cedani’s downright strange thought processes, and her unbridled glee when I played along with her fantasies, earned her a special place in my heart. The little oddball.

The bulk of the gameplay revolves around listening to the requests of your subjects, family, and visiting nobility, who all line up, single file, before the throne each day. They will each make requests, and you’ll have to decide who to help, and in some cases, how. Your resources are limited, and you have to decide if you’re going to help, and how, before moving on to the next person. This raises the stakes but also adds some frustration. If you send your general to help rescue a kidnapped daughter, you might not be able to dispel a band of thieves, but if you opt to pay the random instead, you might not have enough gold to fix a broken roof and save your food supplies. If you help no one, then your people will be upset, disillusioned, and stop paying their taxes, leaving you without any resources. 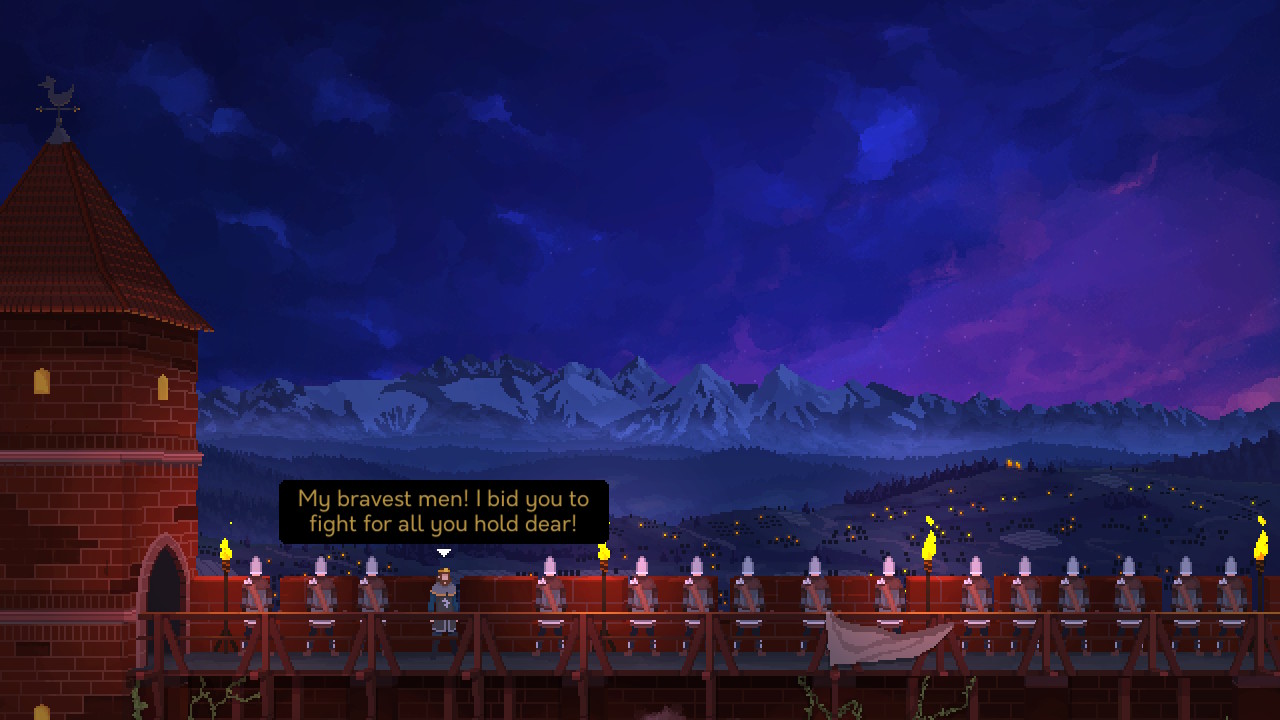 The same holds true for forming alliances, which you will need in order to bolster your troops and be ready to fight that enemy army. Not all of your potential allies like each other, and befriending one will often mean alienating another. That said, friendships often come with a price tag, and that tag often involves marrying off your beloved daughters. Navigating these relationships and demands can be challenging, but if you do it well you’ll not only gain troops, but resources, gold, and maybe even clues to help you solve that murder. …Did I mention there’s a murder? Yeah. That’s fun.

The final mechanic of the game involves commanding your troops in battle, which has you issuing orders and observing from afar. I really enjoyed the tactical part of this, and the battles can be quite challenging. You will be given plenty of warning so you can start shoring up your supplies and soldiers. Your pre-fight preparations will be the biggest factor in deciding the outcome of the battle, so you may have to make some hard decisions where the happiness of your people–or even your family–may be concerned.