Give them a hand --- Table Manners review 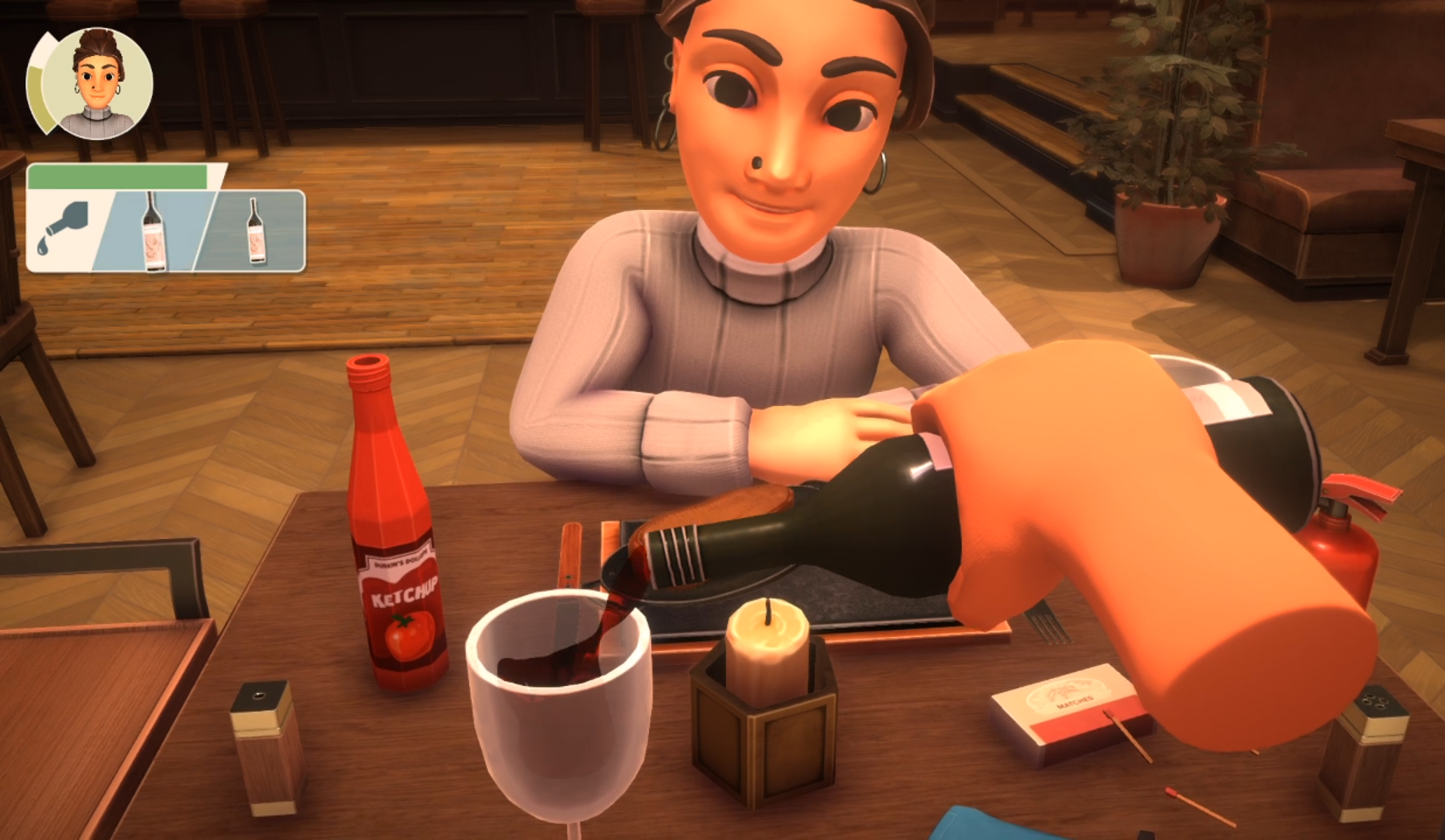 Dating is a big part of many people’s lives, so obviously they’d want everything to go well. They want to impress their date, make them laugh and smile, and hopefully make a connection in order to keep the relationship moving. There are a ton of dating video games, but how many task you with impressing your date with only one hand? As only a floating, disembodied hand, you’ll go on many dates and do whatever they ask of you if you want to keep them happy. The intentionally wonky physics of Table Manners add to the challenge, but that makes succeeding feel much more satisfying.

For anyone familiar with games such as Surgeon Simulator, the gameplay will be easy to get ahold of. That’s not saying the game is easy to play, but if you’ve already had experience with controlling a singular hand with wonky physics, then you’ll have an advantage here. Honestly, the similarities to Surgeon Simulator are the main reason I jumped at the chance to play this game. To move the hand, you use the W key to ascend, the S key to descend, and move the mouse in a direction to move the hand in that direction. This means you have to find a good rhythm between keyboard and mouse if you want to move with more natural and not robotic movements. Think of it almost like a claw machine that gives you more control. 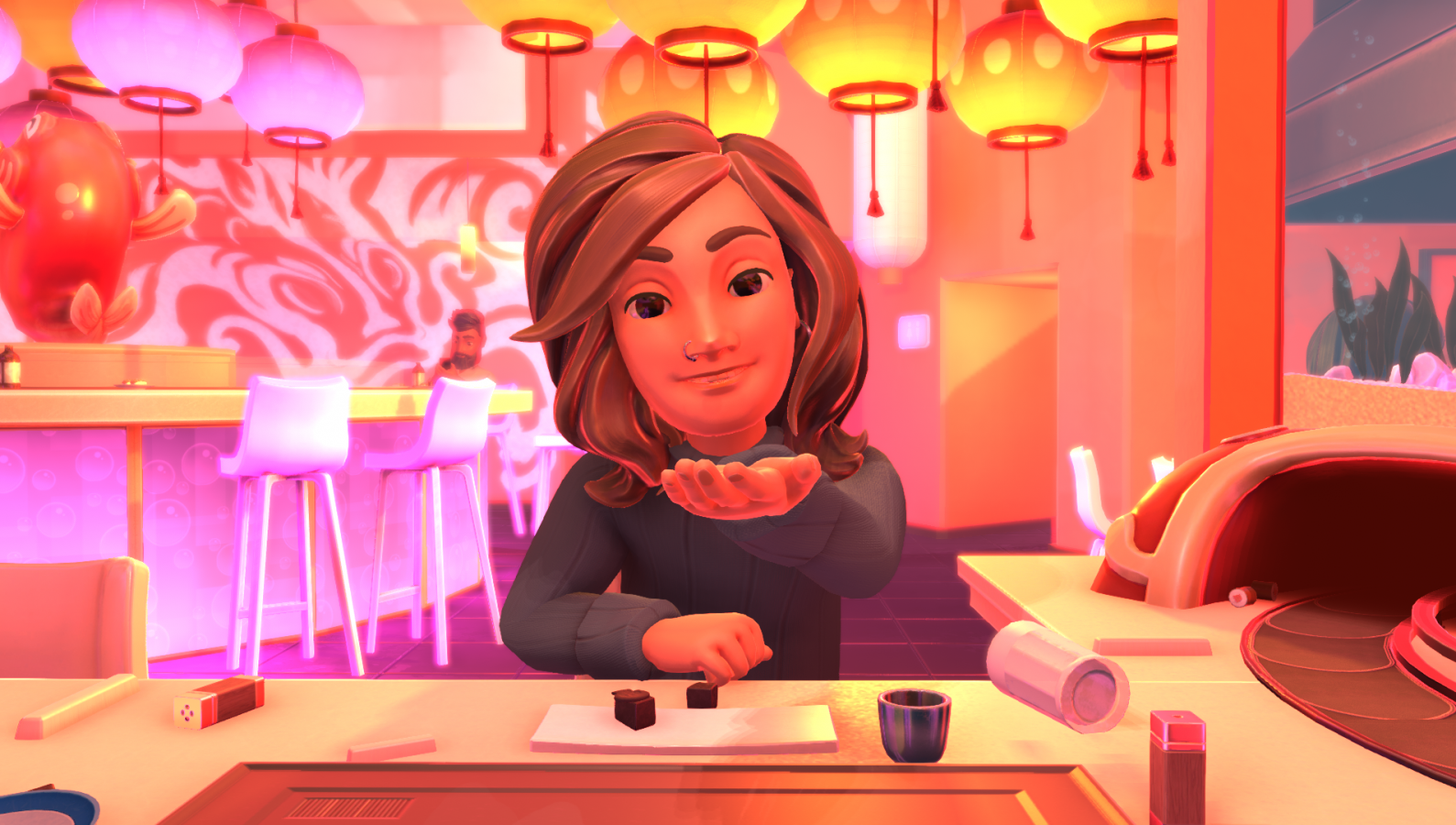 When you’re on a date, you’ll be sitting at the table across from your lucky man or woman. It won’t be long before they start giving you tasks to complete. Sometimes they bluntly request something, while other times it’s hinted at. Regardless of what they say, each request gets represented by a bar that appears on the left side of the screen. It contains icons that designate what food or drink it relates to and what they want you to do with it, along with a steadily decreasing meter that acts as a timer. It could be anything including order me a burger, pepper my steak, pour us some wine, feed me some brownies, and so much more. Yes, some of the requests are things they could easily do themselves. Sure, the pepper is closer to you and your steak, but I guess I’ll pepper it for you. That being said, it never feels like a chore when they ask for something. It just feels like part of the game and you want to do your best to make them happy.

Before you get too comfortable, don’t think they’ll only ask for one thing at a time and wait for you to finish it before requesting something else. I mentioned the timer for each task before, but there will be times when you have multiple timers to keep track of. Your soda pouring meter may be halfway depleted when a new request to order some sushi comes in. Now you have to balance multiple tasks and focus on doing either whatever ends first or whatever is easiest. If you fail any tasks, it’s not game over. Your date gets a bit upset, but if you continue to do well with everything else, then you’ll make up for it. As long as you don’t constantly miss every request, then they won’t walk out on you. However, they will walk out if you screw up badly enough. 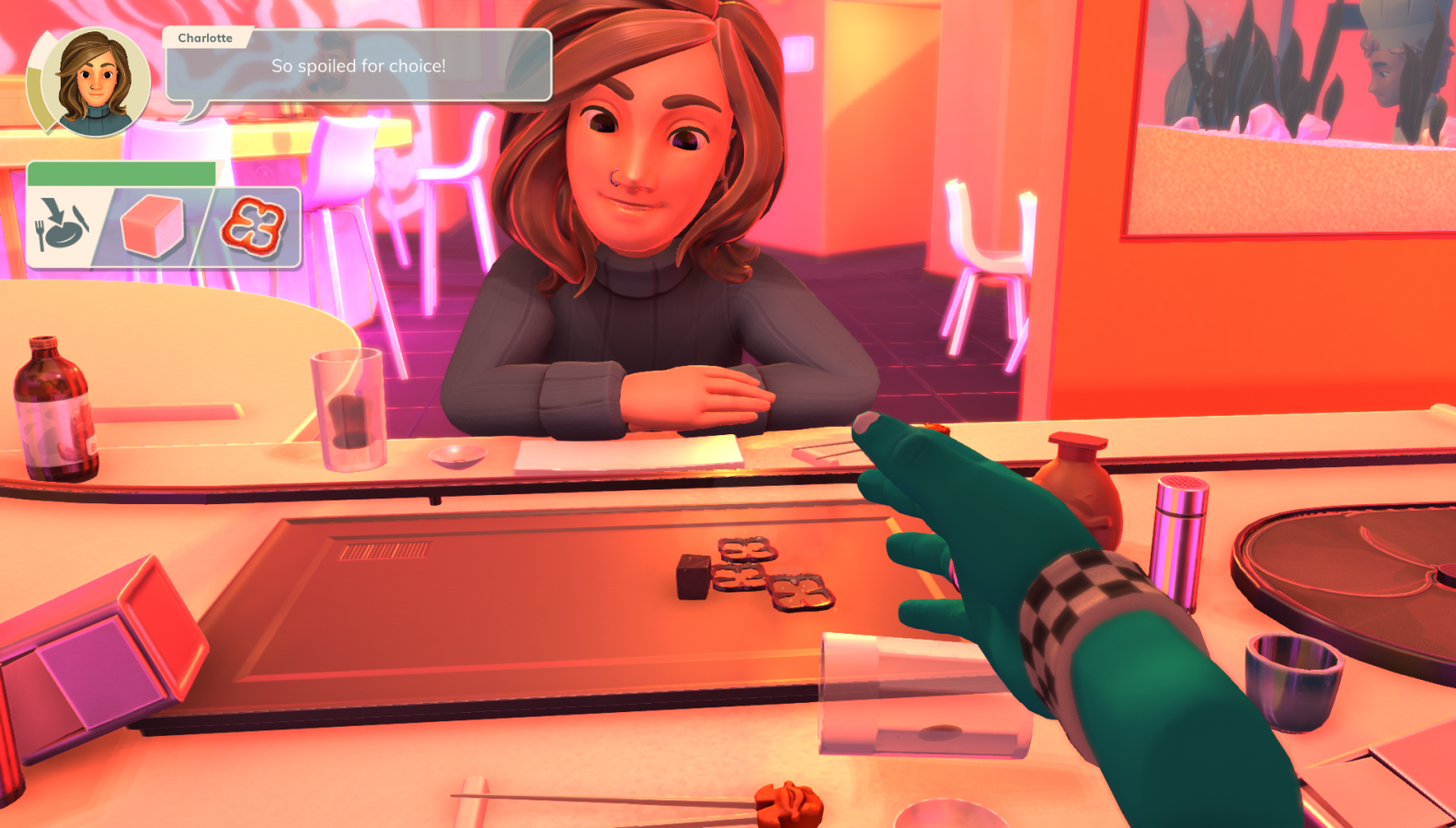 Your dates are kept in a scrapbook that acts as your level select menu. You start with access to only one date in a fancy restaurant, but successfully completing dates unlocks more levels. In order to unlock the next date in the menu, you need to complete the previous one and also have earned a designated number of hearts throughout all previous levels. That means that scraping by with only one heart ratings on each date instead of the max three will only get you so far. You can always go back and retry levels, so take advantage of that. Each locale has four levels of dates, with the difficulty increasing the further down the line you go. For example, level 2-1 is the basic introduction to that locale, while level 2-4 will likely throw a lot at you. There are six tabs that each represent a different restaurant, with each tab containing four levels. Just like with unlocking the later levels, you need to fully complete one tab in order to unlock the next one.

Outside of the actual dates, you have access to the Blundr app on your phone. Blundr is the game’s ironically funny dating app that you use to find dates. You can adjust it to search for men, women, or any. Your phone always shows a date available and you can choose to accept or reject them. Rejecting them just cycles over to some other random person. Once accepted, they become your active date. You can only have one active date at a time, but you can chat with anyone you’ve dated in the messager section of your phone. You can change your active date at any time from the messager section. 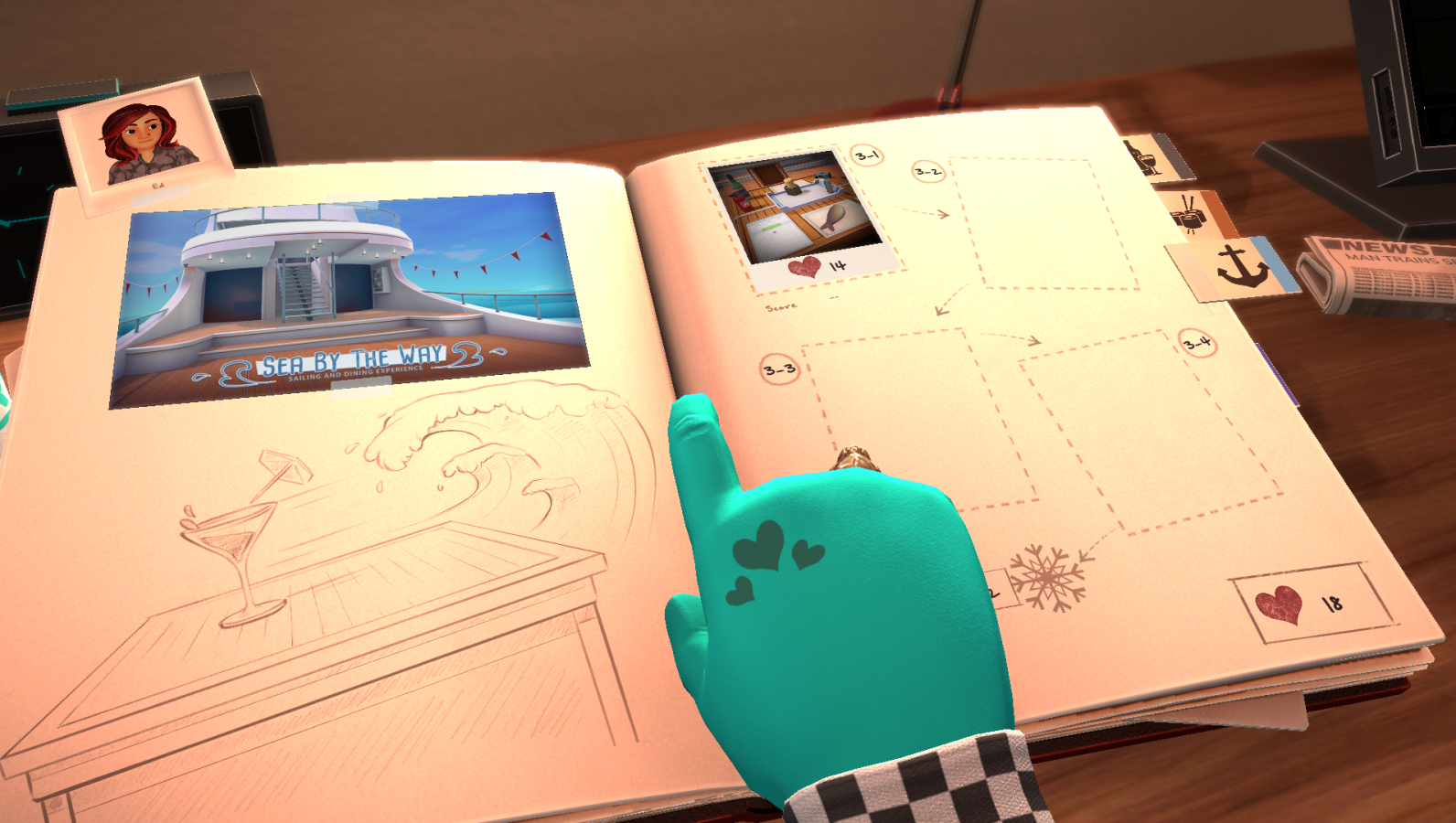 This is my least favorite aspect of the game. When chatting, you only have three options: small talk, joke, or seduce. When responding to who you’re messaging, you have three different options: confirm, deny, or apologize. Clicking any of the aforementioned six options yields a random pre-generated message that fits your choice. The response to what you sent has a 50/50 chance of making sense or not. It quickly becomes clear that the game randomly grabs from pre-generated lists and it breaks immersion when they make no sense. For example, one time I sent “Are you made of cheese? You look pretty Gouda to me!” and got back ” you’re giving me ideas ;)” but that same message got sent to the same person again later and they replied “I don’t get it.” It’s not a big deal, but besides a little side thing to play with, the messager doesn’t serve much of a purpose. The most it does is helping dates feel less ignored by sending them messages after each date. If you ignore previous dates by not messaging them or not taking them out, your relationship slowly goes down with them.

You’d think that keeping a strong relationship with one person would reward you in some way, but that’s not actually the case. Besides the aesthetic differences of each date that serve no gameplay purpose, dating different people only offers potential customization rewards. Each date has a symbol near their head on the Blundr app that shows you what you can possibly unlock by successfully taking them out on a date. If you want to unlock more customization options, then date as many people as you feel necessary. You can unlock new skin tones such as blue, teal, green, and more, various rings, wrist bands, tattoos, and nails. It’s neat getting to make your hand more unique, even if you did so just to make yourself laugh (I did that myself). 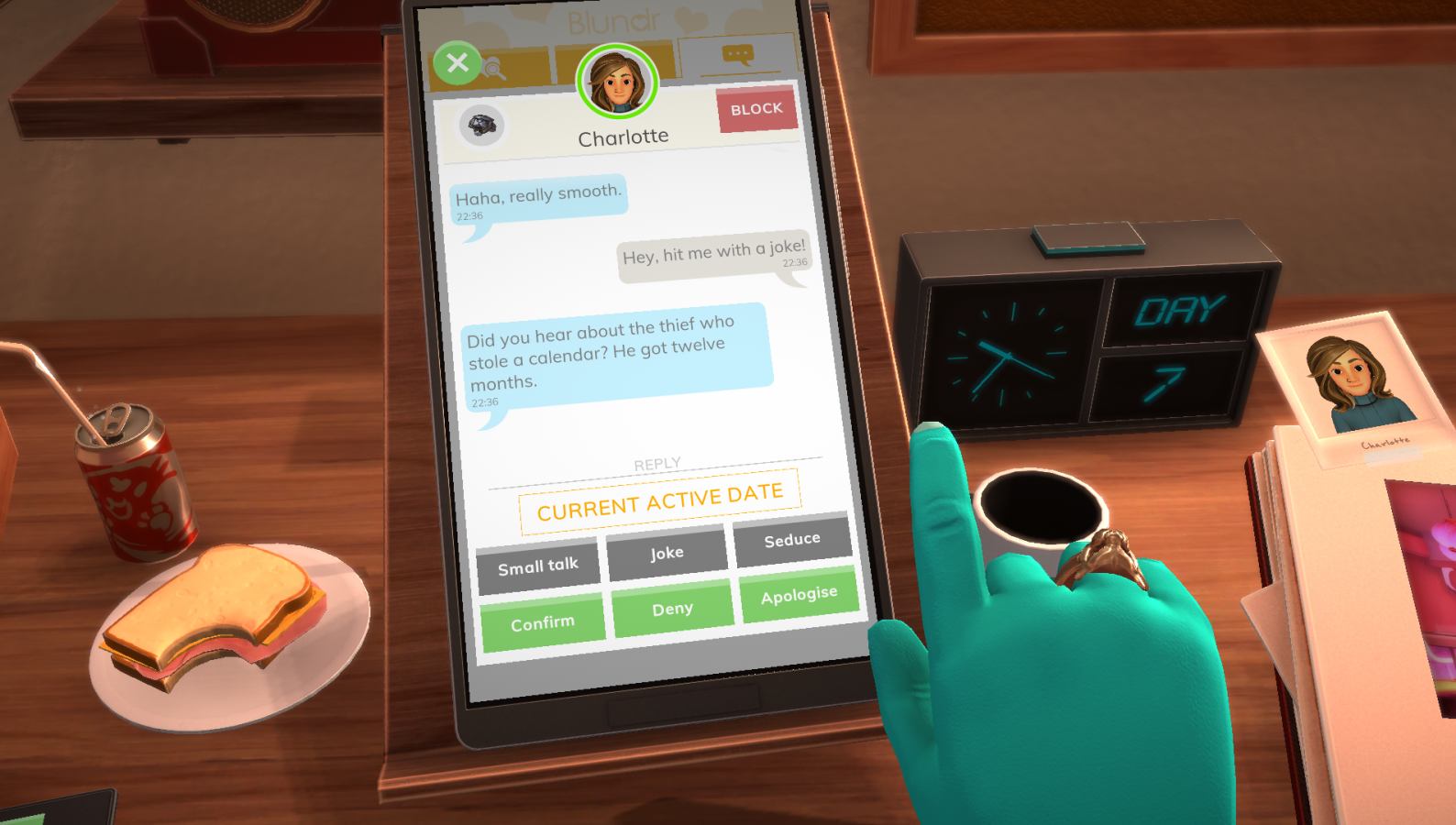 Graphically, the world looks cartoonish but in a good way. The style they went for adds to the charm of the game’s premise and meshes well with the intentionally wonky mechanics. As long as you don’t go crazy, the controls are fairly smooth, but again, the difficulty is part of the challenge behind the game. I will mention that you may experience some extra craziness such as utensils occasionally getting stuck in your hand or objects glitching through the table. With some effort and a bit of force, you can usually get them free. I’m not saying it’s not annoying to deal with, but it’s never broken the game for me. It’s not for everyone, but I still say it’s worth checking out. All in all, if you’re fine testing your skills with intentionally wonky controls in a game with a goofy yet charming premise, then Table Manners is a great choice.