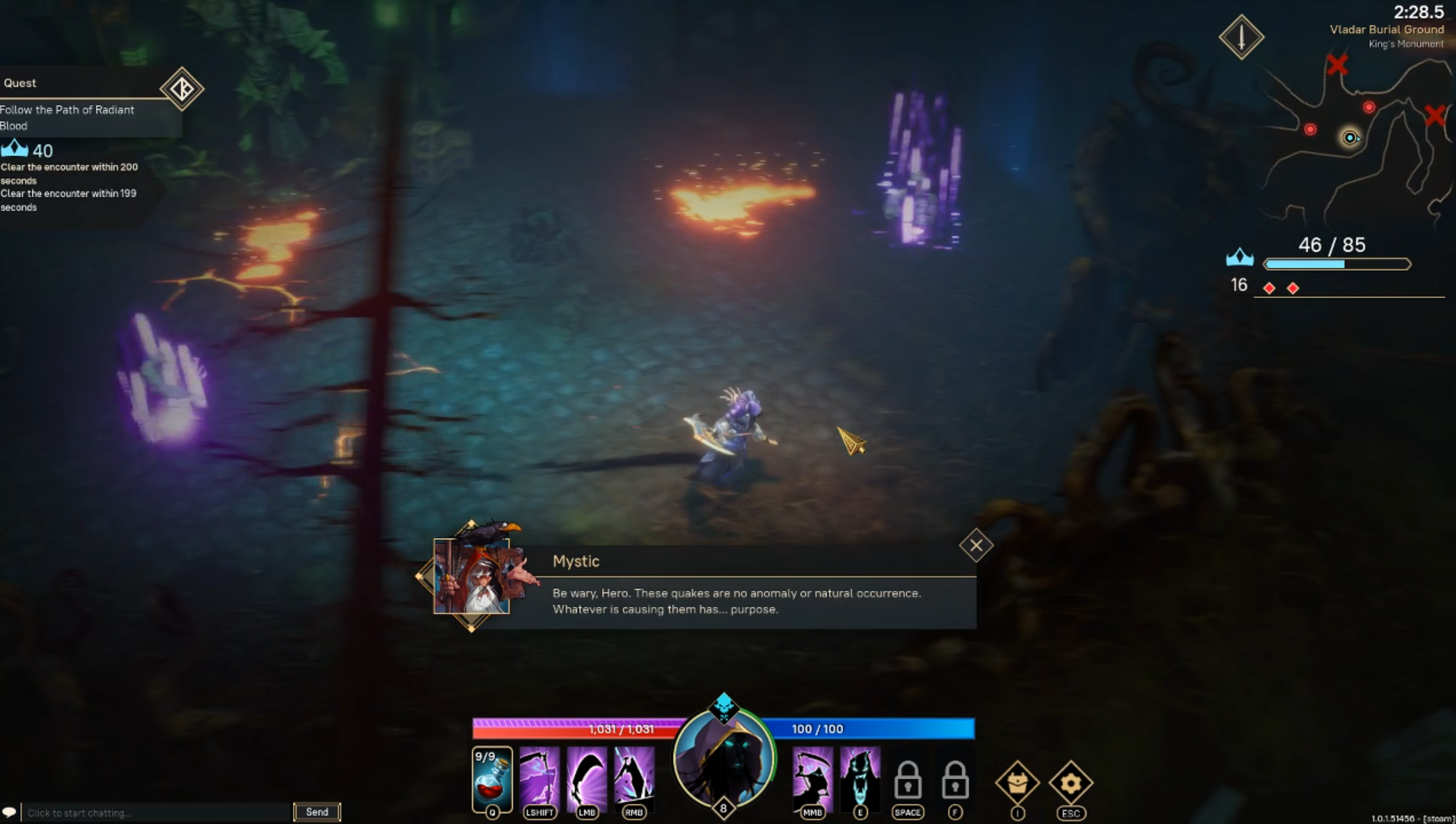 You are a warrior, struck down by a powerful grim reaper-like being. The darkness is spreading, an evil lord has risen, and the Gods that oversaw the realm have mysteriously disappeared. Thankfully, you’ve been resurrected in the Pantheon because of your strong will. This sets you on a quest to discover what happened to the absentee Gods and hopefully save them from a horrible fate. Pagan Online is a hack-and-slash RPG with elements similar to Diablo, although it doesn’t quite live up to what games like Diablo offer.

Pagan Online will seem familiar to anyone who has played Diablo or games like it. When starting the game, you can choose who you want to be from ten different heroes. Each hero has their own moveset, abilities, stats, and skill trees. You can be a blind kid who communes with nature and a bear sidekick, a wizard who controls fire and lightning simultaneously, or a grim reaper who thrives on fear and weakening his foes, to name a few of them. I personally went for Morokh the reaper because I liked his design and how his moves allow him to lower his foes’ defenses and leech their health for himself. His scythe places a curse on enemies with every hit, causing them to take more damage for a short time. That, along with the rest of his abilities, lets Morokh weaken enemies as he heals himself and deals vicious blows. 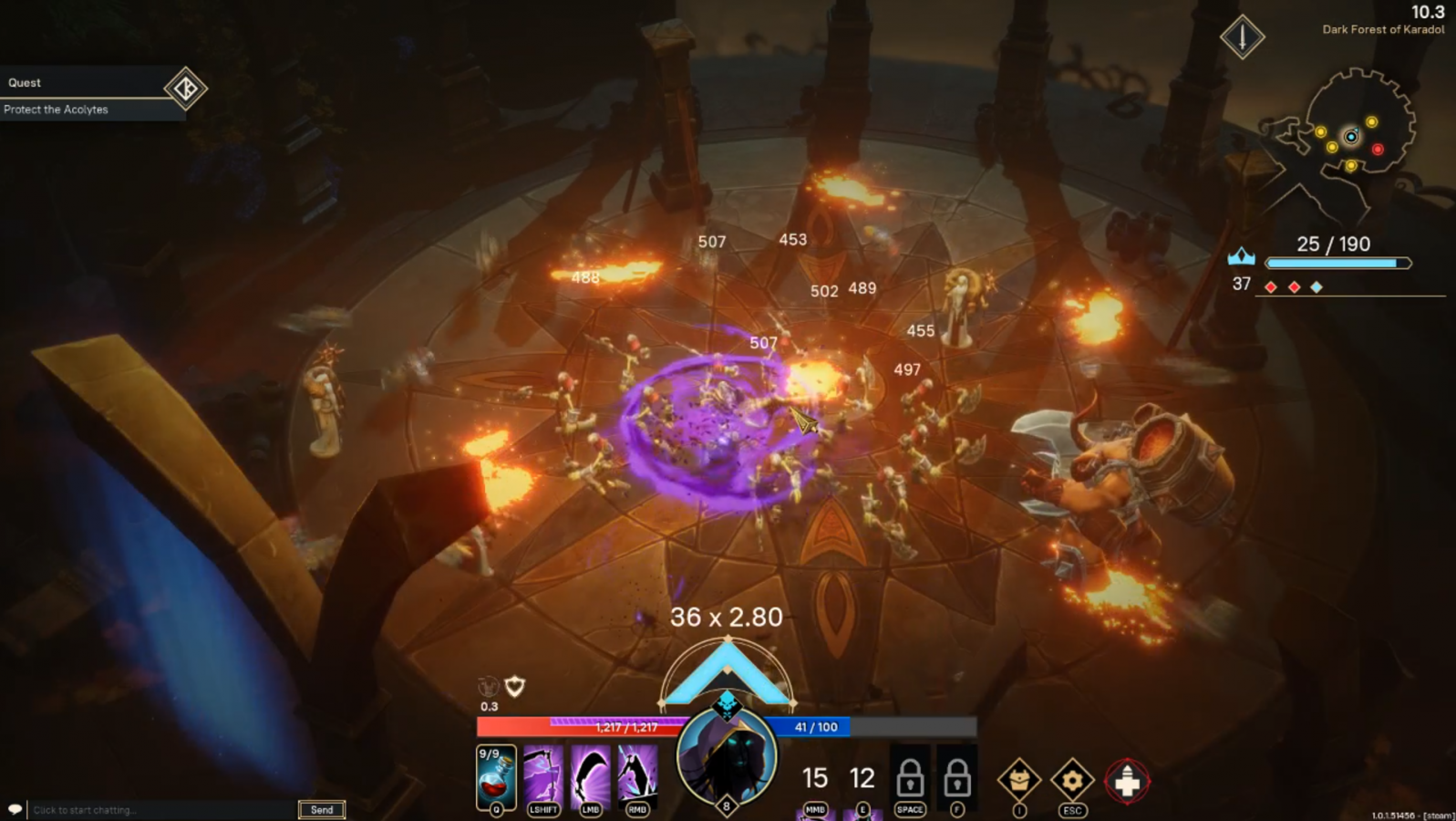 Speaking of abilities, as you defeat enemies and complete missions, you earn experience and level up. Leveling up rewards you with ability points that you can spend in order to upgrade your abilities, unlock new abilities, or modify your abilities. Your abilities can each be leveled up three times in order to boost their effects. Each ability also has three branching paths that offer different modifications, with each path containing three smaller changes and one special effect. You can spend points in more than one path of an ability, so don’t worry about being forced to choose only one. Also, you can spend gold at any time if you want to respec your abilities. It’s pretty helpful if you want to use your points to improve skills for now, but decide you want to switch up your playstyle later on. I’ve actually done this myself, and swapped out multiple modifications in order to focus more on healing myself during combat. For example, I used horrible visage, which struck fear into foes and caused them to run away, for a little while, but once I unlocked soul drain, a move that causes bleeding to everyone nearby, I took my points from horrible visage and moved them to soul drain. The cost of a respec isn’t that much, so it’s easy to switch up skills and experiment.

As you play, you’ll find gear in chests or dropped by enemies. You’ll be able to equip a weapon, several charms, some trinkets, and a few other items that increase your character’s stats and provide extra bonuses. You can add fire damage, increase critical hit chances, increase your max health, and many other alterations. Make sure to pay attention to the effects of your gear because you can find some pretty useful bonuses on what you find. 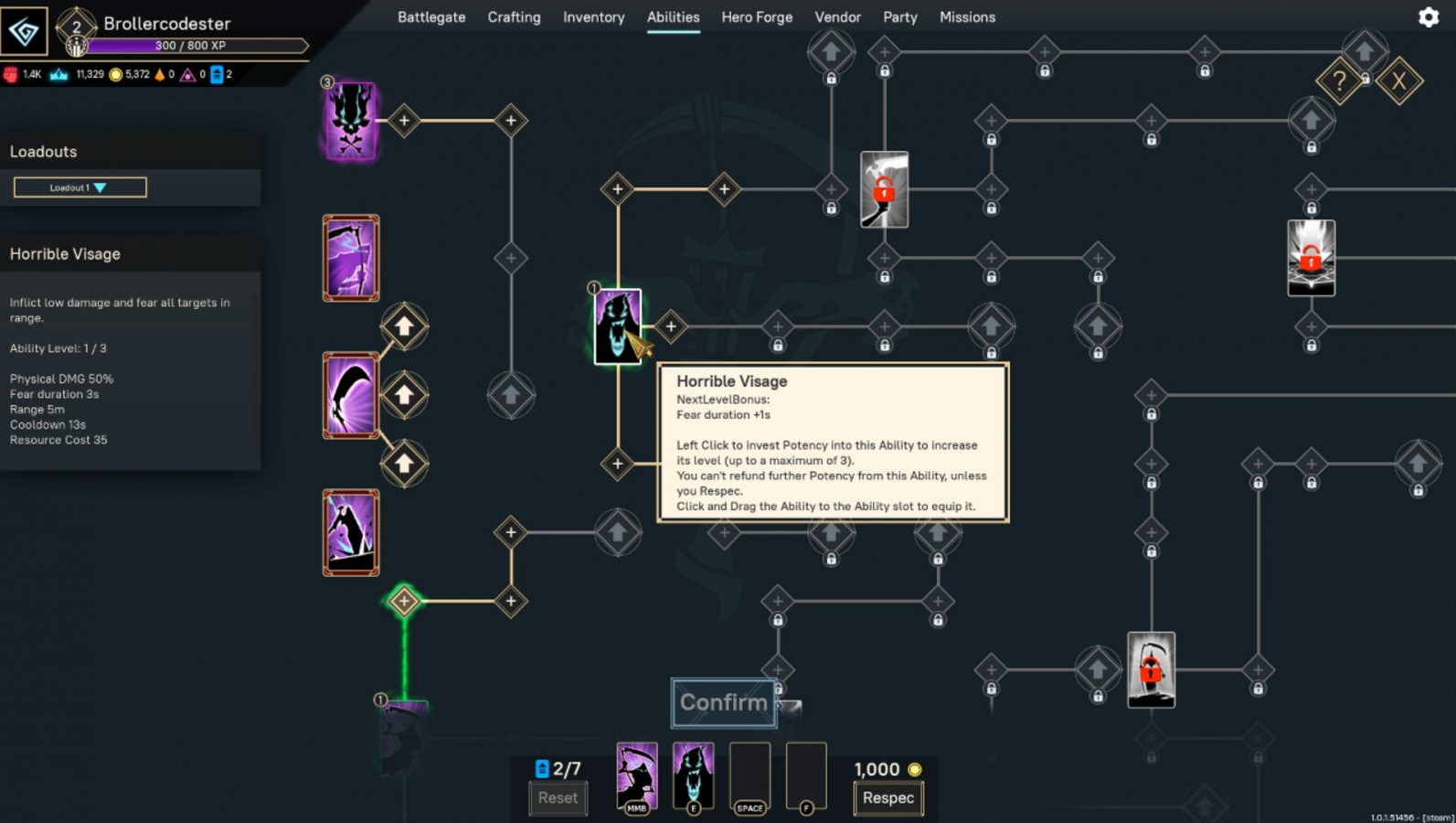 The campaign itself is broken up into eight acts, each containing multiple missions. The story is interesting enough, but nothing groundbreaking. I more so kept playing because of the gameplay rather than the desire to discover more of the story. There are some interesting characters that you’ll encounter along the way, with several of them taking refuge in the Pantheon. The Pantheon is a hub that allows you to take on campaign missions, side missions, and assassinations, as well as sell gear, adjust your abilities, create gear in the forge. You can only sell gear for some reason, but you’ll find plenty of it during your missions. The forge requires recipes that you can find during missions, and they require gear, materials, and gold to use.

Side missions allow you to perform a variety of tasks that reward you with gold, sometimes gear, and experience from defeating enemies. These include patrols, expeditions, defense, and survival challenges. Side missions refresh and change after a period of time, which helps keep them new and fresh. They also tend to reward you with key fragments that you can use to take on assassinations. Assassinations require specific keys in order to do them, which is stated in their description. For example, one may need five torment key fragments in order to do it. They all have the same goal: make your way through the level and kill the target. The target is typically a tough boss-like enemy, so be ready for a fight. All in all, I say these activities are good for giving you more fighting to do and also helping level up your character more. 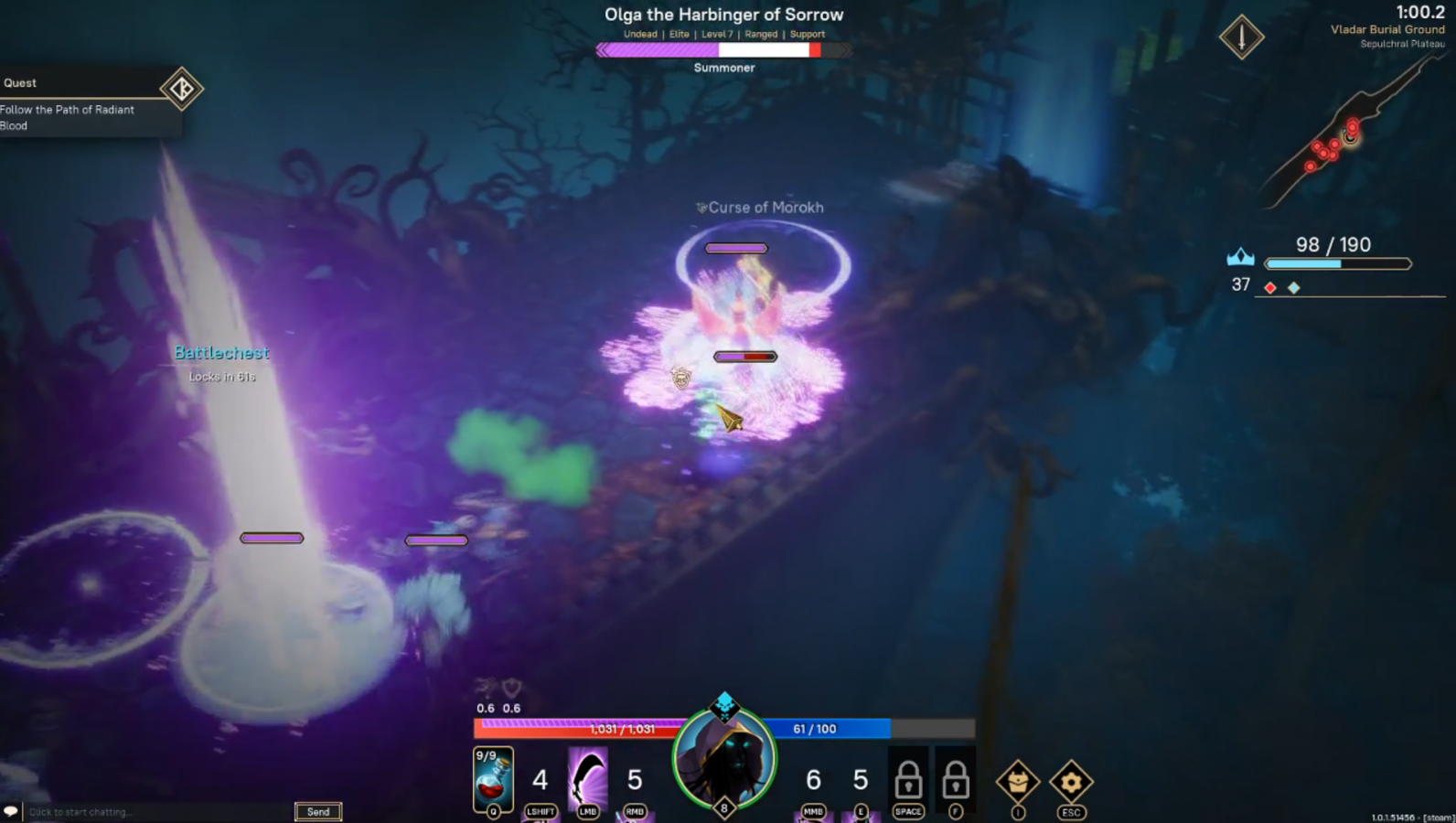 As the name Pagan Online suggests, you play the game online. That doesn’t mean that you’re actually playing with other people though. Sure, other people can show up in the Pantheon alongside you on the server, but they won’t be in your missions unless you team up. I tried to do some matchmaking in the hopes of finding some teammates to test the online play with, but sadly I never matched with anyone. That being said, you’re always online anyway, so it shouldn’t be that different unless you meet someone with a really bad connection.

Aesthetically, the game looks good. It has the look and feel of a Diablo-like game, which is nice for those looking to scratch that Diablo itch. It doesn’t reach the level of the Diablo games, but it’s not bad as a cheaper alternative. The soundtrack, sound effects, and voice acting all sound fine. Nobody sounded like they didn’t want to be there, while the rest of the sounds felt appropriate for the tone of the game. Performance-wise, Pagan Online ran pretty smooth; I didn’t notice any framerate issues or graphical problems. In the end, Pagan Online is a Diablo-like game that provides hours of entertainment, but unfortunately not to the same level of depth, excitement, and multiplayer action as Diablo.