Bumping, pumping, and beats that get you jumping --- Avicii Invector review 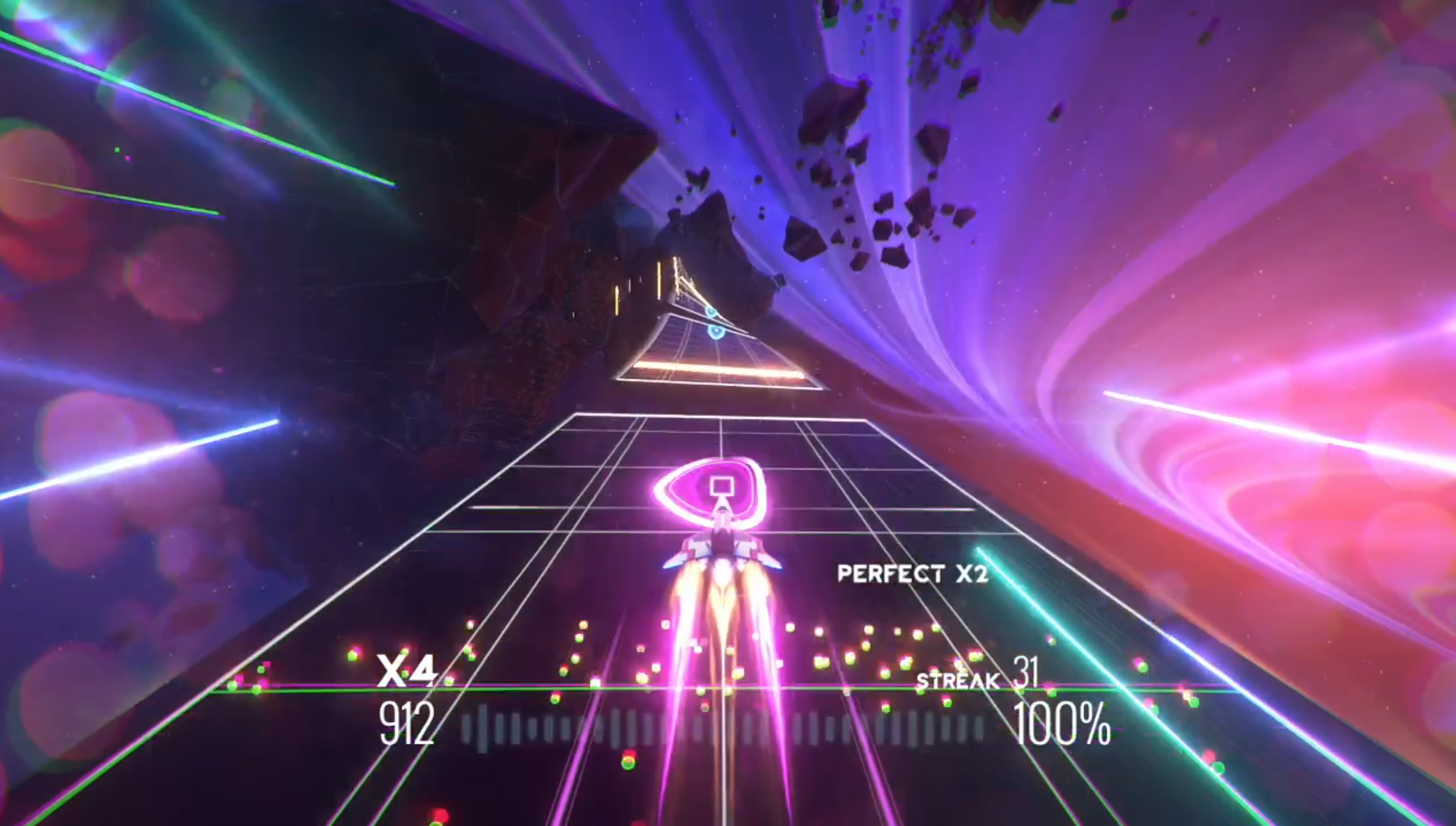 Music, whether you realize it or not, is an incredibly important part of our daily lives. Music is used to evoke emotions, emphasize tones, and tell stories in movies, shows, video games, and even with the music on its own. Some artists want to express themselves, even branching out of their usual space. We lost Avicii, (real name Tim Bergling) last year and his collaboration to create a video game based around his music has finally come out. Avicii Invector takes 25 of his hit songs from throughout the years and places them into a rhythm game where you control a spaceship. A beautiful tribute to the late artist is made better by the fantastic soundtrack and challenging yet fun gameplay.

The gameplay revolves around you controlling a spaceship as it soars through space. The camera’s point of view is from above and behind the ship. For those familiar with Guitar Hero, it’s similar to that style of rhythm gaming. The notes (in this case button prompts) come towards you and you’re tasked with hitting the corresponding button. There are three lanes: left, center, and right. The buttons can appear in any lane and include the four face buttons, L1, and left and right on the D-pad. The four face buttons and the D-pad buttons appear as themselves, while L1 is represented by glowing yellow triangles that you fly through. Unlike the previous buttons, L1 can be pressed while in any lane. 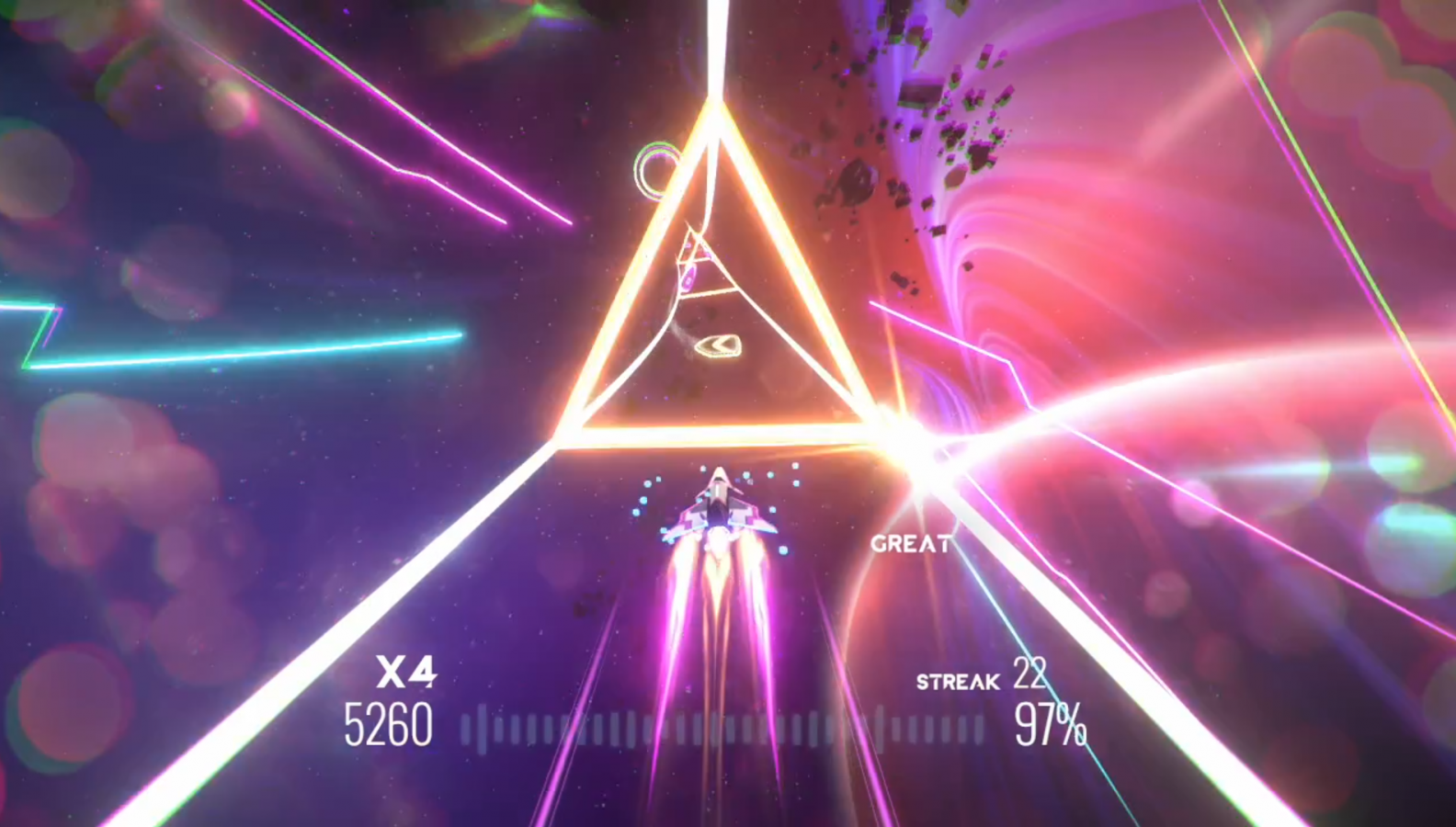 Now that may be simple enough, but those three lanes aren’t your only areas to worry about. The track that you’re flying through is triangle shaped, meaning that there are two angled ceilings above you. Button prompts can be on either of these ceilings as well, but if you want to hit them, you need to jump there. Pressing the D-pad direction that leads to that ceiling causes you to jump to it and orient the screen, making it your new floor. This forces you to watch all three tracks and be prepared to reorient yourself in order to keep going. Outside of the tracks there are free-flying sections where you have to fly through purple rings instead of pressing buttons.

Just like Guitar Hero games, you can fail the song if you miss too many notes. There’s a meter at the bottom that shows the percentage of the song that you’ve successfully completed. The songs require a 75% success rate in order to be successfully cleared, so you need to make sure you don’t end the song below 75%. Even if you complete the song, not reaching that threshold results in failure. It’s a fairly high requirement, but hey, a C is good enough to pass in school, so why not here? 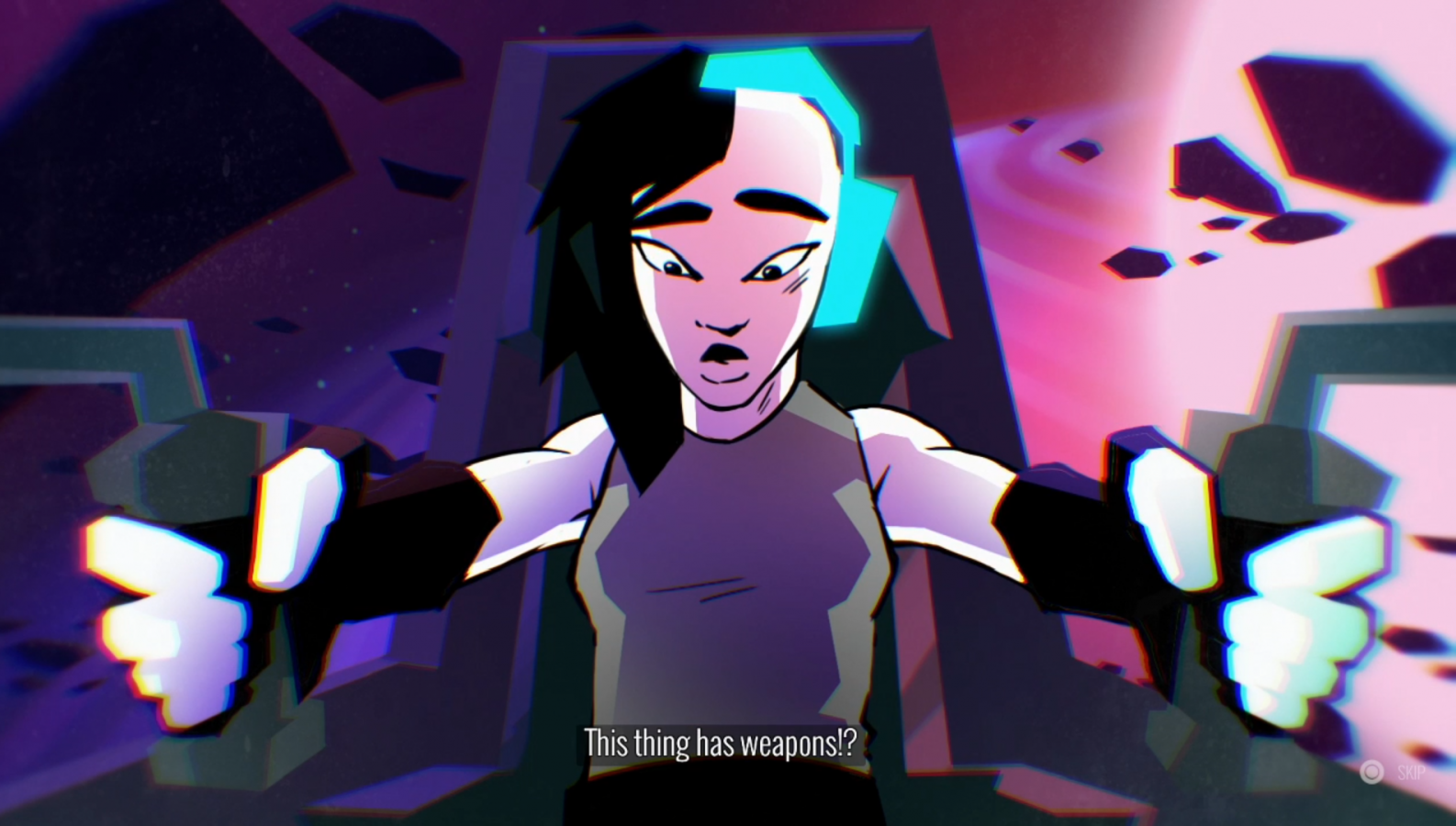 Avicii Invector follows a space pilot as she flies from place to place in search of chocolate. It’s…um…an interesting premise to say the least, but the story isn’t what you’re here for. That being said, the protagonist is sassy and tough, which made the occasional story-based scene worth watching. After certain songs, scenes would play out as she continues her quest. Near the end of the game, it felt like there’s something that I was missing. It’s as if there’s a deeper storyline or plot point that wasn’t expanded upon. Honestly, it makes me think that there may have been some deep backstory that got pushed to the wayside. If that’s the case, I’d like to find out more.

The campaign is broken up into multiple locations, each containing about four to five songs. You can play a location’s songs in any order you choose, but you can’t travel to the next area until you’ve completed every song in the current area. After you’ve finished the songs in the final location, the story concludes and leaves you wanting more. The upside is that there is an extra section with three bonus songs to play. I immediately jumped on those when the story was over. 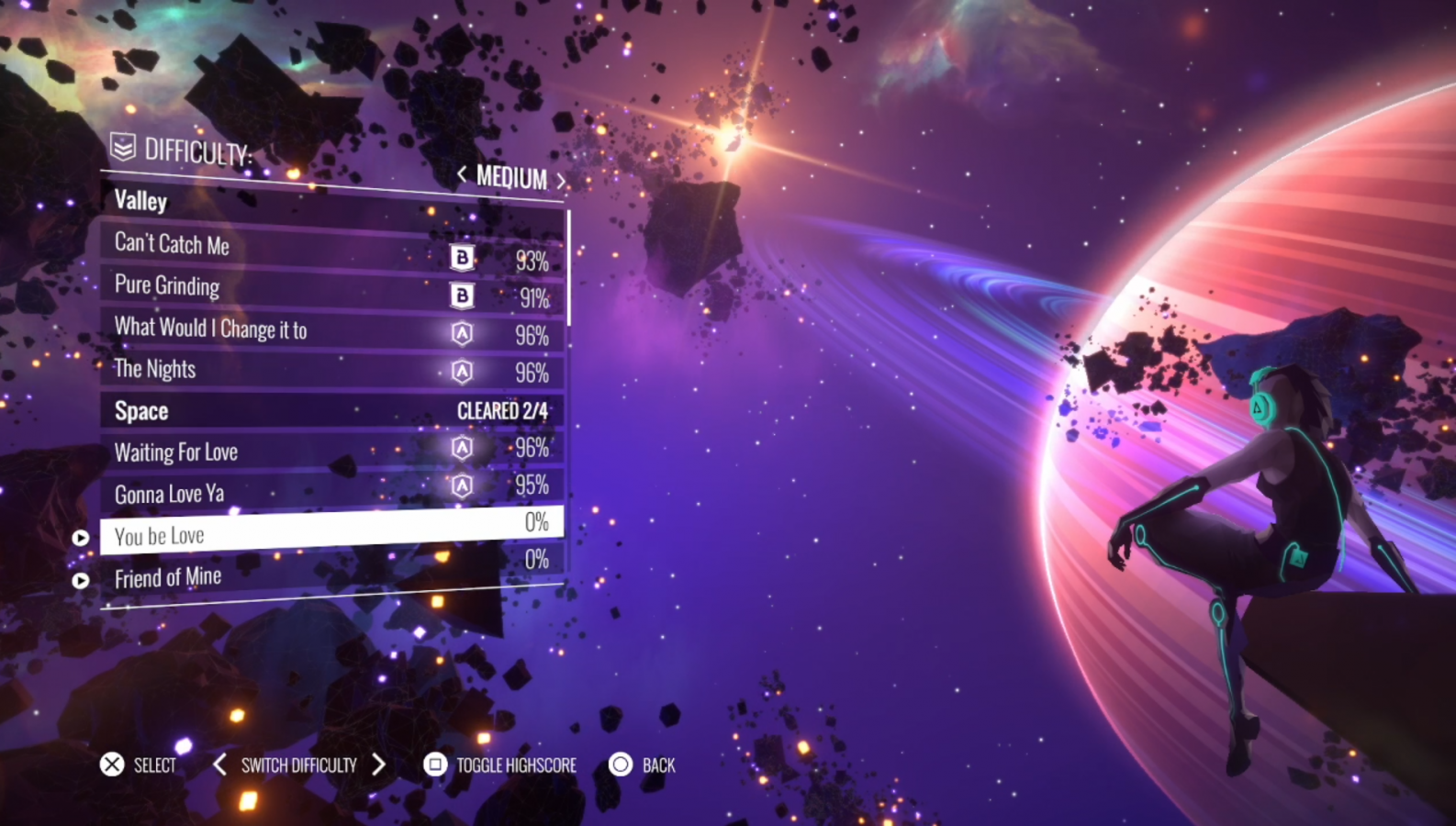 One issue with the game is that it doesn’t take that long to complete all the songs and beat the story. I played on medium difficulty and it took me no more than two hours to beat every song. There are three difficulty levels that act as their own stories, although there’s no difference storywise. This means that if you want to be a completionist then you’ll add on to the replayability. Leaderboards that compare your scores with other players online can also tempt you to keep playing. Not only can you replay songs to try and improve your score for yourself, but you can try to stake your place in the top of the leaderboards. I know I managed to be in the top 50 in one of the songs on my first try and that felt pretty nice.

If you want to play with friends without taking turns, you have the multiplayer mode available. Unfortunately, there’s no online multiplayer; there’s only split-screen. That’s nice for when you’re hanging out with one or more friends, but you can’t challenge them from different places. The game would’ve benefited from online multiplayer; I’d like the chance to face-off against other people and see who could get the better score side-by-side. It doesn’t hurt the game too much, but it limits the multiplayer experience quite a bit. 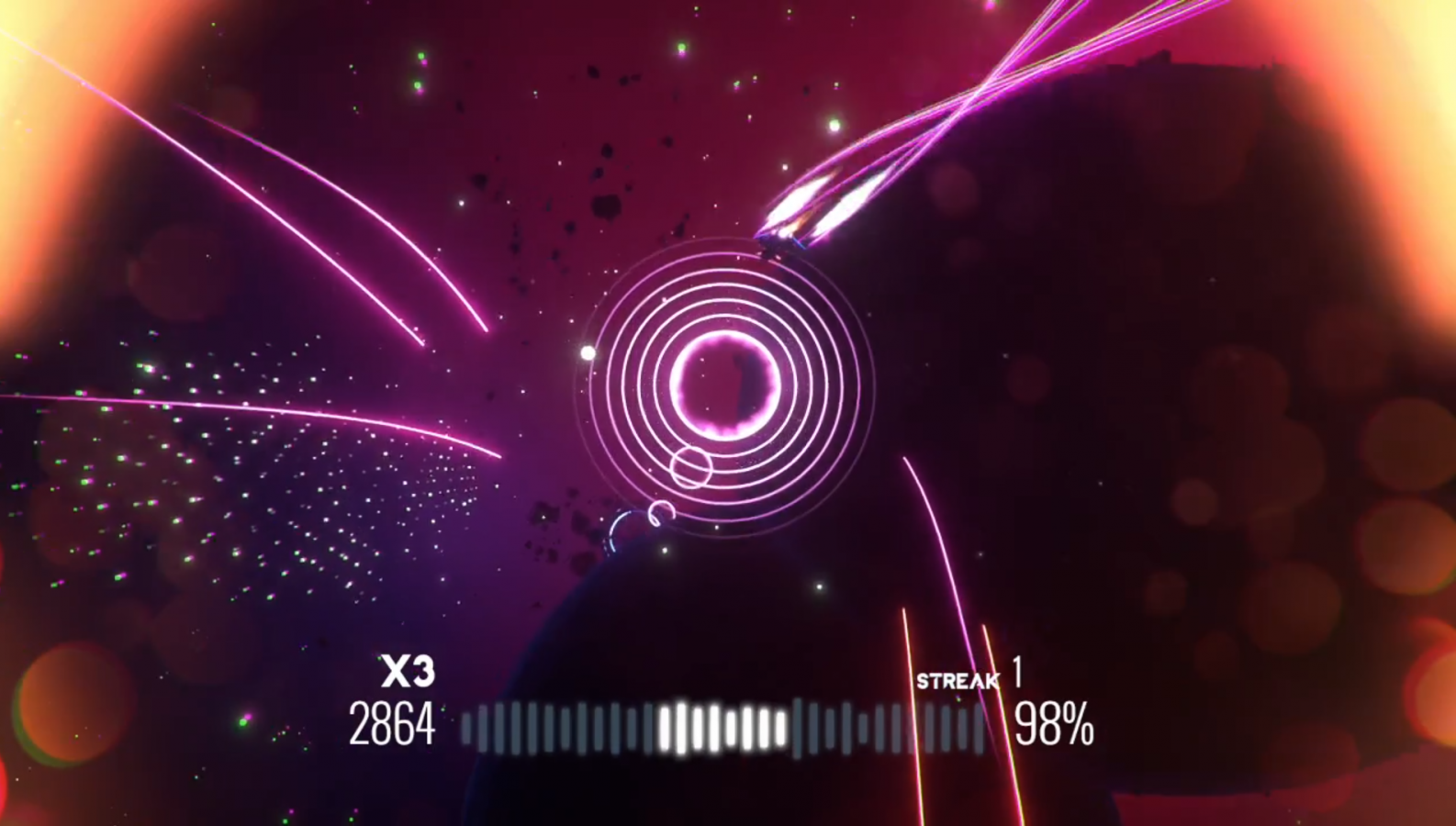 Now, the biggest aspect of the game: the soundtrack. What a collection of songs! From adrenaline pumping beats to emotional tracks to upbeat songs, this game has you covered. It isn’t just a collection of the same type of songs that get repetitive and old as time passes. Each song feels unique and has its own charm to it. I only knew a few of Avicii’s songs before playing, but he hooked me with every new song I heard. The gameplay was challenging, even on medium difficulty. Some of the later songs have some pretty tough sections, so be forewarned. As for the visuals, they are a wondrous blend of majestic colors and the mystical nature of space. All in all, even though it doesn’t take a ton of time to play through, Avicii Invector is a touching tribute to the late Tim Bergling, and the fact that part of the proceeds goes to the Tim Bergling mental health foundation makes it all the more worth it.